The Times of Earth, International Edition
0
138 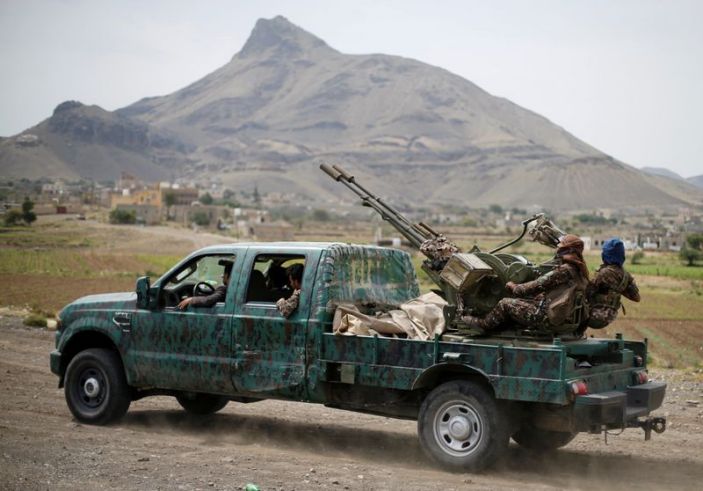 Houthi fighters man a machine gun mounted on a military truck as they parade during a gathering of Houthi loyalists on the outskirts of Sanaa, Yemen July 8, 2020. REUTERS/Khaled Abdullah

Yemen’s Iran-backed rebels on Monday dismissed the U.S. move to designate them a terrorist organization in the final days of the Trump administration while a leading aid agency warned such a designation would deal another “devastating blow” to the impoverished and war-torn nation.

The planned designation, announced by U.S. Secretary of State Mike Pompeo late Sunday, would take effect a day before President-elect Joe Biden is inaugurated Jan. 20. It was not clear whether Biden would overturn the decision.

Yemen is mired in a disastrous humanitarian crisis, with millions of people in wide swaths of the country on the brink of famine as a result of six years of civil war.

Pompeo said he was proceeding with the designation of the rebels, known as Houthis, along with separate terrorist designations for the three top rebel leaders. At the same time, he pledged the U.S. would help absorb the impact on aid groups and allow humanitarian assistance to continue to flow into Yemen.

“We are not fearful,” tweeted Mohammed Ali al-Houthi. “America is the source of terrorism. It’s directly involved in killing and starving the Yemeni people.”

Others said the designation was an attempt to deflect attention from the U.S. political crisis in the wake of the deadly Capitol rioting and efforts to impeach President Donald Trump. “We are honored to be terrorists and the world’s gangsters,” tweeted the Houthis media official Abdel-Rahman al-Ahnoumi.

In Iran, the Foreign Ministry spokesman Saeed Khatibzadeh condemned the designation as a “doomed-to-failure” action at the end of Trump’s administration. He said the U.S. would eventually have to enter into negotiations with the legitimate representatives of Yemen — referring to the Houthis — to find a peaceful solution to the conflict.

Yemen’s internationally recognized government described the Houthis as a “terrorist militia” and in a statement issued by its foreign ministry called for a “continuation of the escalation and intensification of the political and legal pressures on the Houthis to pave the way for a peaceful solution to the conflict.”

Yemen, on the tip of the Arabian Peninsula, is the scene of the world’s worst humanitarian disaster. The war, has killed more than 112,000 people, has left the majority of the country’s nearly 30 million people in need of humanitarian aid. The war

The conflict started in 2014 when the Houthis overran the north and the capital, Sanaa. The following year, the Saudi-led coalition intervened to wage war on the Houthis to try to restore the internationally recognized President Abed Rabbo Mansour Hadi’s government to power.

In early January, Hadi’s government accused the rebels of firing ballistic missiles that targeted a plane with Cabinet members after landing in the southern port city of Aden, an attack that killed more than 25 people. The Houthis denied they were behind the strike.

Following the attack, Yemeni Prime Minister Maeen Abdulmalik Saeed told The Associated Press the rebels need to “realize that if they continue these criminal and terrorist operations, there will be no path to peace.”

At the time, Abdulmalik said a terrorist designation would be a step “of great importance” and would “help establish peace in Yemen.”

Past rounds of peace talks and cease-fire agreements have faltered and aid agencies, which mostly operate in Houthi-controlled areas, fear any targeting of the rebel group would impact the entire population.

The Norwegian Refugee Council, one of the main humanitarian agencies active in the country, said Monday that Pompeo’s planned sanctions “will hamstring the ability of aid agencies to respond” to the humanitarian needs of millions of Yemenis.

“Yemen’s faltering economy will be dealt a further devastating blow,” said Mohamed Abdi, the group’s director for Yemen. “Getting food and medicine into Yemen — a country 80% dependent on imports — will become even more difficult.”

Relief organizations have long warned that sanctions could prove catastrophic for efforts to help starving Yemeni civilians caught in the conflict between the Houthis and the Yemeni government, backed by a Saudi-led coalition at war with the rebels.

In his announcement, Pompeo said the U.S. recognizes the designation could impact the humanitarian situation and would take action to counter that.

“We are planning to put in place measures to reduce their impact on certain humanitarian activity and imports into Yemen,” he said. Those measures will include the issuance of special licenses by the U.S. Treasury to allow American aid to continue to flow to Yemen and for humanitarian organizations to continue to work there, he said.

Separately, the U.S. has suspended millions of dollars of its aid donations to Houthi-controlled areas after reports of theft and looting of aid. U.N. agencies have long complained of rebels stealing and rerouting food aid.