The Times of Earth, International Edition
0
803 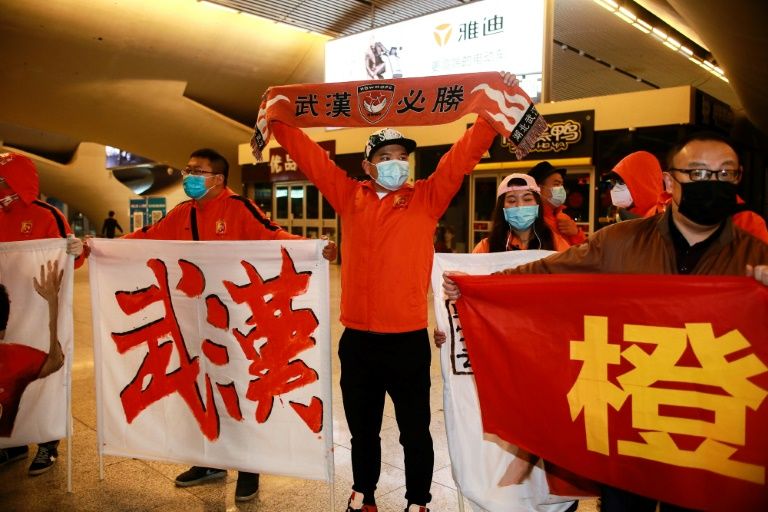 Wuhan Zall, the Chinese Super League team from the epicentre of the coronavirus pandemic, made an emotional return to their home city after more than three months torn from their families.

Zall endured a turbulent 104 days on the road — including being stranded in Spain — because Wuhan was sealed off in January when the virus killed and infected thousands there.

The city is now emerging from its weeks-long lockdown and hundreds of chanting fans met the Zall players when they arrived at Wuhan’s train station late Saturday, state media said.

Wearing masks, the players had bouquets of flowers thrust into their hands as supporters clad in the team’s orange colours held banners and sang.

“After more than three months of wandering, the homesick Wuhan Zall team members finally set foot in their hometown,” the team said on the Twitter-like Weibo.

The squad, led by their Spanish coach Jose Gonzalez, will now spend a few days at home before resuming training on Wednesday.

“The local players will be reunited with their families, having not seen them for more than three months,” said Zall, who finished sixth last year in the top-flight CSL.

“The club is very grateful for the support and understanding of the players’ families.”

The squad’s return home is the final chapter in a long saga.

They began training for the new Chinese Super League season, since postponed indefinitely, in early January in the southern city of Guangzhou.

They flew to Malaga, Spain towards the end of January, by which time the city of Wuhan and its 11 million people were under harsh restrictions because of the coronavirus outbreak.

“They are not walking viruses, they are athletes,” Gonzalez told Spanish media at the time, pleading for his players not to be demonised.

But when the virus began taking hold in Spain in March, Zall made arrangements to fly back to China, where the number of infections was slowing markedly.

Wuhan was still sealed off so the squad, via a prolonged transit in Germany, flew to China’s southern city of Shenzhen on March 16.

They went into three weeks of quarantine, followed by training in the nearby city of Foshan, before taking a high-speed train from Guangzhou to Wuhan on Saturday evening.

Zall are preparing for a season that still has no start date. The CSL was supposed to begin on February 22 but could now kick off in late June, according to latest reports.

China’s government says it has curbed coronavirus at home, but on Friday admitted errors in tallying the death toll in Wuhan and raised the count there by 50 percent to 3,869.