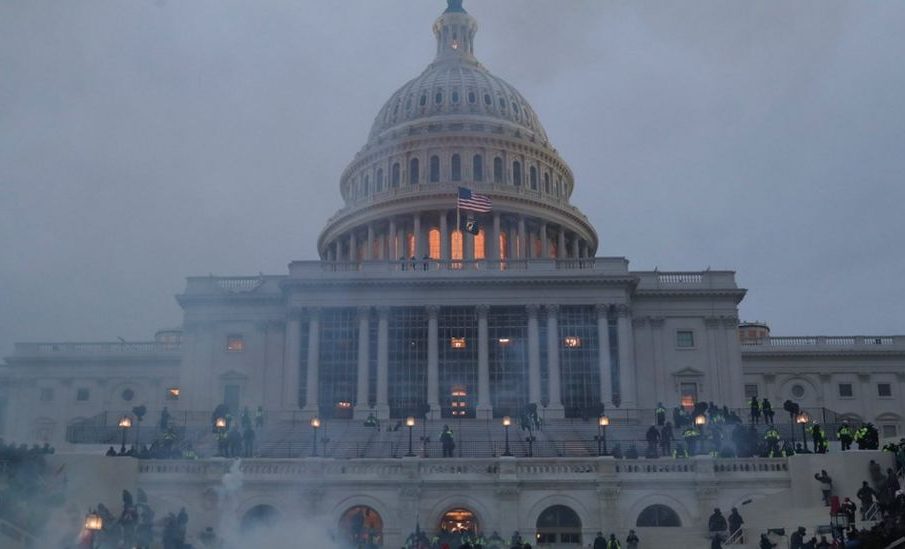 Dusk falls around the US Capitol as Trump supporters continue their occupation of its front steps. REUTERS

Teargas and bullets in the U.S. Capitol building. Outrage and condemnation from leaders across the world.

“What is happening is wrong,” New Zealand Prime Minister Jacinda Ardern said in a statement Thursday. “Democracy — the right of people to exercise a vote, have their voice heard and then have that decision upheld peacefully — should never be undone by a mob.”

The chaotic scenes from the storming of the building at the center of American democracy by angry supporters of President Donald Trump are normally associated with countries where popular uprisings topple a hated dictator. The Arab Spring, for instance, or the Velvet Revolution in Czechoslovakia.

But this time it was an attempt by American citizens to stop a peaceful transition to power after a democratic election in a country that many around the world have looked at as a model for democratic governance.

“We must call this out for what it is: a deliberate assault on Democracy by a sitting President & his supporters, attempting to overturn a free & fair election! The world is watching! ” Irish Foreign and Defense Minister Simon Coveney said on Twitter.

U.N. Secretary-General Antonio Guterres was “saddened by the events at the U.S. Capitol,” spokesman Stephane Dujarric said. “In such circumstances, it is important that political leaders impress on their followers the need to refrain from violence, as well as to respect democratic processes and the rule of law.”

Several countries, both allies and antagonists of America, issued travel warnings to their citizens.

Australians were urged to avoid U.S. protests following what Australian Prime Minister Scott Morrison described as “rather disturbing scenes” in the United States.

“The riots and protests that we’ve seen in Washington, D.C., have been terribly distressing. They are very concerning,” Morrison told reporters shortly after the U.S. Congress resumed proceedings late Wednesday Washington time.

“This is a difficult time for the United States, clearly. They’re a great friend of Australia, and they’re one of the world’s greatest democracies. And so … our thoughts are with them and we hope for the peaceful transition to take place,” he said.

The Chinese Embassy in the United States also warned its citizens about the “grave” situation surrounding the coronavirus pandemic and the “large scale protest march” in Washington that prompted the city government to impose a curfew.

Shock and disgust marked the reactions of many world leaders.

“Disgraceful scenes in US Congress,” tweeted Prime Minister Boris Johnson of Britain, a staunch U.S. ally for generations. “The United States stands for democracy around the world and it is now vital that there should be a peaceful and orderly transfer of power.”

Other friendly countries were similarly appalled at what they described as an attack on American democracy, though some said they believed U.S. democratic institutions would withstand the turmoil.

“Trump and his supporters should finally accept the decision of the American voters and stop trampling on democracy,” German Foreign Minister Heiko Maas wrote on Twitter. “From inflammatory words come violent deeds.” He added that “contempt for democratic institutions has disastrous effects.”

“The beauty of democracy?” with a shrug emoji was the reaction tweeted by Bashir Ahmad, a personal assistant to the president of Nigeria, which has seen several coups since independence — including one led decades ago by President Muhammadu Buhari, who most recently entered the office via a vote.

The prime minister of the world’s largest democracy, India’s Narendra Modi, said on Twitter: “Distressed to see news about rioting and violence in Washington DC. Orderly and peaceful transfer of power must continue. The democratic process cannot be allowed to be subverted through unlawful protests.”

Chilean President Sebastián Piñera and Colombian President Iván Duque were among those in Latin America who denounced the protesters, but both also said they were confident that American democracy and the rule of law would prevail.

“In this sad episode in the U.S., supporters of fascism showed their real face: anti-democratic and aggressive,” tweeted Luis Roberto Barroso, Brazilian Supreme Court justice and the head of the country’s electoral court. He said he hoped “American society and institutions react with vigor to this threat to democracy.”

Venezuela, which is under U.S. sanctions, said the events in Washington show that the U.S. “is suffering what it has generated in other countries with its politics of aggression.”

Venezuelan President Nicolás Maduro has survived U.S.-backed opposition efforts to oust him despite accusations of human rights abuses, civil unrest and a humanitarian crisis that has forced millions to flee the oil-rich country.

In Puerto Rico, many people took to social media and joked that the U.S. territory no longer wanted statehood. Independence, they said, looked appealing for the first time in decades.

In fact, that pursuit of independence marked one of the last times the U.S. Congress was stormed violently. Four members of Puerto Rico’s Nationalist Party opened fire on the House floor in March 1954, wounding five lawmakers.

European Parliament President David Sassoli, who leads one of the largest legislatures in the world, also denounced the scenes at the Capitol. The European Union has spent four cantankerous years dealing with the Trump administration, and its top officials have repeatedly said they are looking forward to a better relationship under President-elect Joe Biden.

“This is insurrection. Nothing less. In Washington,” tweeted Carl Bildt, a former prime minister of Sweden.