The Times of Earth, International Edition
0
1792 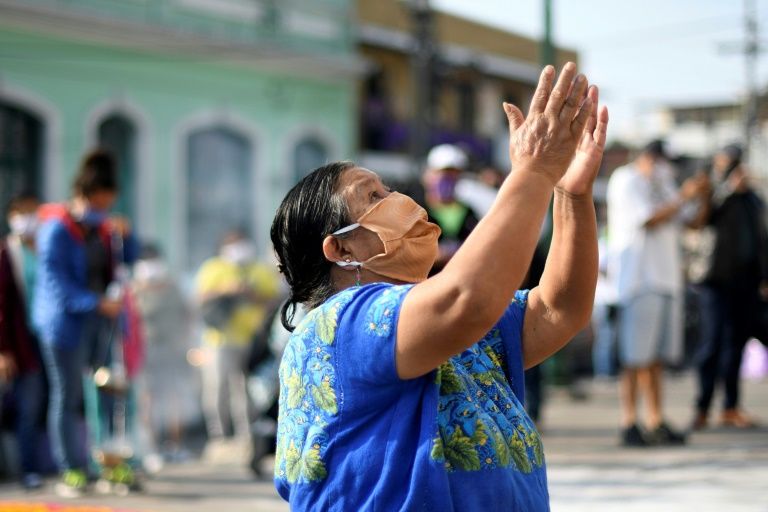 Alongside the personal tragedies, the coronavirus pandemic has also had a stark economic toll (AFP Photo/Johan ORDONEZ)

World powers scrambled on Thursday to build a global response to the human tragedy and once-in-a-century economic collapse caused by the coronavirus epidemic, as death tolls in the US and Europe soared higher.

In a locked-down New York, the UN Security Council was to meet on the pandemic for the first time. And, by video conference, EU finance ministers are wrangling over how to bail out their worst hit members Italy and Spain.

New York State recorded its single day record for COVID-19 deaths, with 799, although the rate of new hospitalisations fell, Governor Andrew Cuomo said. In neighbouring Canada, the government forecast that between 11,000 and 22,000 could die.

“We anticipate the worst economic fallout since the Great Depression,” said IMF chief Kristalina Georgieva, warning that all but a handful of countries will see incomes fall and urging governments to provide “lifelines” to businesses and households alike.-

The US Federal Reserve threw out just such a lifeline to Americans, with chairman Jerome Powell announcing financing facilities of $2.3 trillion “to provide as much relief and stability as we can during this period of constrained economic activity.”

He warned, however, that the US economy is moving “with alarming speed” towards “very high unemployment”. Nearly 17 million Americans have lost their jobs since mid-March.

It is a similar picture in Europe, where French Finance Minister Bruno Le Maire said he expected GDP to fall by six percent over the year, despite a planned 100-billion-euro ($109 billion) relief plan.

Pope Francis was preparing to celebrate Maundy Thursday with The Mass of the Lord’s Supper, but he was to be unable to perform the tradition of washing the feet of the faithful in case of infection.

Meanwhile, the number of worldwide cases of the novel coronavirus since it spread from China earlier this year topped 1.5 million, according to an AFP tally. More than 88,981 people have died.

Alongside the personal tragedies and the pressure on overburdened hospitals, there has been a stark economic toll, with the World Trade Organization warning of the “worst recession of our lifetimes.”

The worst-hit countries in Europe — the worst-hit continent — are Italy and Spain, where daily death tolls are now down from their peaks but still running high, despite strict lockdowns.

In Italy, the country’s youngest COVID-19 patient, a two-month-old baby girl, was reportedly released from hospital, a moment of hope in a country with 17,669 dead.

Italy’s epidemic has turned life in the country upside down, but also brought out acts of generosity from the likes of Sister Angel Bipendu, a nun and a doctor who distributes medical care alongside spiritual succour.

She tries to remain optimistic, despite the ravages of the coronavirus reminding her of earlier epidemics in her former central African homeland, the Democratic Republic of Congo.

“I think of my Congo, where sick people will also die of hunger,” the 47-year-old told AFP as she made home visits in Bergamo province, epicentre of Italy’s outbreak. “I’m afraid of not being able to do everything I have to do. Fear of being infected? Absolutely not.”

One hundred Italian doctors, Sister Bipendu’s colleagues, have died in the outbreak, according to their health association.

Madrid and Rome are seeking assistance from EU partners to rebuild their economies in the wake of the disaster, but Germany has rejected the idea of joint borrowing and the Netherlands is blocking a compromise solution.

EU finance ministers were to meet later Thursday by videoconference for the second late-night crisis talks of the week to try to agree terms to allow hard-hit members to access funds.

“If we do not seize the opportunity to put new life into the European project, the risk of failure is real,” Italian Prime Minister Giuseppe Conte told the BBC, suggesting the very future of the EU was at stake.

Christine Lagarde, the head of the European Central Bank, said it was vital the ministers hatch a plan big enough to meet the challenge, warning: “If not all countries are cured, the others will suffer.”

European companies are also suffering under a public lockdown, which health experts say is vital to slow the virus’ spread but has effectively frozen economic life.

In one example, German airline Lufthansa warned it was losing one million euros an hour and would need state aid.

The coronavirus slump has also fed the instability in world energy markets, and on Thursday top oil producers from OPEC like Saudi Arabia and its OPEC+ partners, including Russia, met to discuss cutting production to boost prices.

The virus has travelled around the whole world, and confined more than a third of humanity to their homes, but there has been a marked lack of international solidarity. Thursday’s videoconference meeting of the UN Security Council will be the first on the crisis since it began.

Led by Germany, nine of the council’s 10 non-permanent members requested the closed-door meeting last week, fed up with the body’s inaction over the unprecedented global crisis.

It has also been a tough week in Britain, where 881 new deaths were recorded on Thursday.

Under the leadership of Johnson’s cabinet, the British government — which has already pledged a stimulus of billions of pounds — expanded its overdraft with the Bank of England by an undisclosed amount, to temporarily cover the cost of emergency measures.

And the pandemic is marching into areas previously only lightly affected. Africa faces vast economic damage, with the World Bank warning that sub-Saharan Africa could slip into its first recession in a quarter of a century.