The Times of Earth, International Edition
0
800 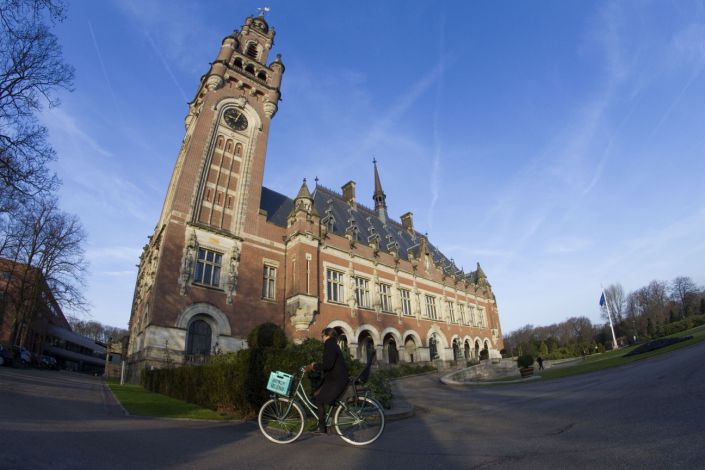 Peace Palace, which houses the International Court of Justice, or World Court, is seen in The Hague, Netherlands. The United Nations' highest court ruled Friday Dec. 18, 2020, that it will intervene to settle a decades-old border dispute between Latin American neighbors Guyana and Venezuela. The decision by the International Court of Justice means it will now move to judge the merits of the case, which will likely take months or years. (AP Photo/Peter Dejong, File)

The United Nations’ highest court ruled Friday that it will intervene to settle a decades-old border dispute between South American neighbors Guyana and Venezuela.

The decision by the International Court of Justice means it will now move to judge the merits of the case, which will likely take months or years.

Venezuela had argued that the world court did not have jurisdiction and refused to participate in legal arguments on the issue held earlier this year.

The territorial dispute dates back to 1899 and an arbitration award by an international tribunal that drew the border between the two South American nations largely to the favor of Guyana, which was then a British colony. The Tunisia-sized swath of jungle west of the Essequibo river in the dispute is rich in gold, diamonds, timber and other natural resources.

The United Nations referred the dispute to the ICJ in 2018 after a mediation effort failed. Venezuela has rejected the court’s intervention, arguing instead that a 1966 agreement to resolve the controversy effectively nullified the original arbitration.

In an otherwise deeply divided, socialist-run country, Venezuela’s longstanding claim is a rare source of national unity. The eastern region, which makes up 40% of modern day Guyana, has for generations been referred to on Venezuelan maps as a “reclamation zone” denoted with diagonal lines.

Adding to the intrigue was ExxonMobil’s discovery of massive amounts of oil in offshore fields that intersect with Venezuela’s claim. The deep-water discovery is expected to boost Exxon’s production by a whopping 750,000 barrels per day by 2025 and quickly transform Guyana, an impoverished country of 800,000, into a major oil power.

The world court’s president, Abdulqawi Ahmed Yusuf, said Friday that “the court concludes that it has jurisdiction to entertain Guyana’s claims concerning the validity of the 1899 award … and the related question of the definitive settlement of the land boundary dispute between the territory of the parties.”