The Times of Earth, International Edition
0
158 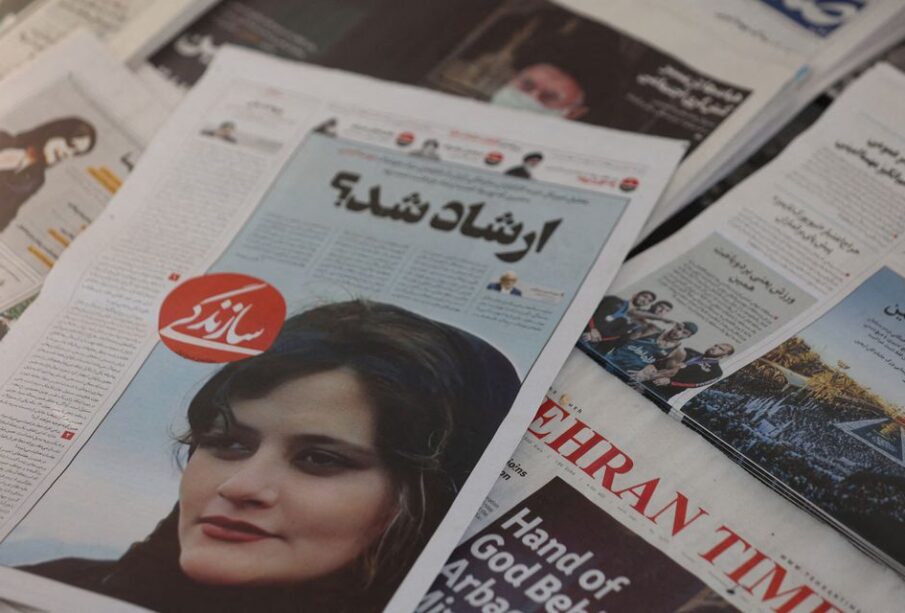 A newspaper with a cover picture of Mahsa Amini, a woman who died after being arrested by the Islamic republic's "morality police" is seen in Tehran, Iran September 18, 2022. Majid Asgaripour/WANA (West Asia News Agency) via REUTERS

Female students in Tehran chanted “get lost” as Iranian President Ebrahim Raisi visited their university campus on Saturday and condemned protesters enraged by the death of a young woman in custody, videos on social media showed.

Raisi addressed professors and students at Alzahra University in Tehran, reciting a poem that equated “rioters” with flies, as nationwide demonstrations entered a fourth week.

“They imagine they can achieve their evil goals in universities,” Raisi said on state TV. “Unbeknownst to them, our students and professors are alert and will not allow the enemy to realise their evil goals.”

A video posted on Twitter by the activist 1500tasvir website showed what it said were women students chanting “Raisi get lost” and “Mullahs get lost” as the president visited their campus. Another social media video showed students chanting: “We don’t want a corrupt guest”, in reference to Raisi.

Reuters could not immediately verify the videos.

A state coroner’s report denied that 22-year-old Mahsa Amini had died due to blows to the head and limbs while in custody of the morality police and linked her death to pre-existing medical conditions, state media said on Friday.

Amini, an Iranian Kurd, was arrested in Tehran on Sept. 13 for wearing “inappropriate attire” and died three days later.

Her death has ignited nationwide demonstrations, marking the biggest challenge to Iran’s clerical leaders in years. Women have removed their veils in defiance of the clerical establishment while furious crowds called for the downfall of Supreme Leader Ayatollah Ali Khamenei.

The government has described the protests as a plot by Iran’s enemies including the United States, accusing armed dissidents – among others – of violence in which at least 20 members of the security forces have been reported killed.

After a call for mass demonstrations on Saturday, security forces shot at protesters and used tear gas in the Kurdish cities of Sanandaj and Saqez, according to the Iranian human rights group Hengaw.

In Sanandaj, capital of the northwestern Kurdistan province, one man lay dead in his car while a woman screamed “shameless”, according to Hengaw, which said the man had been shot by security forces after he honked his horn as a sign of protest.

A senior police official repeated the claim by security forces that they did not use live bullets and told state media that the man had been killed by armed dissidents.

State media played down the protests across Tehran, the capital, reporting “limited” demonstrations in dozens of areas. It said many bazaar traders had shut their shops for fear of damage in the unrest, denying there was a strike.

But videos on social media showed what appeared to be the largest protests in the past three weeks in many Tehran neighbourhoods, including a crowd packing streets in the lower-income southern neighbourhood of Nazi Abad.

Videos shared on social media showed protests in several major cities. One video showed a young woman lying unconscious on the ground after she was apparently shot in the northeastern city of Mashhad, Iran’s second most populous city.

The Norway-based Iran Human Rights said at least 185 people had been killed in the protests, with the highest number of killings in the restive Sistan-Baluchistan province in the southeast.

As state TV showed footage of Ayatollah Khamenei on its main evening news, the broadcast was briefly interrupted in an apparent hack with his image, surrounded by flames, next to pictures of Amini and three other women allegedly killed during the protests.

After a weekly meeting, Raisi and Iran’s head of judiciary and parliament speaker called for unity.

“Currently, the Iranian society needs the unity of all its strata regardless of language, religion and ethnicity to overcome the hostility and division spread by anti-Iranians,” they said in a statement.

Hengaw also carried a video of emergency personnel trying to resuscitate a person and said one protester had died after being shot in the abdomen by security forces in Sanandaj. Reuters could not verify the video.

One of the schools in Saqez city’s square was filled with girls chanting “Woman, life, freedom”, Hengaw reported.

A university student who was on his way to join protests in Tehran said he was not afraid of being arrested or even killed.

“They can kill us, arrest us but we will not remain silent anymore. Our classmates are in jail. How can we remain silent?” the student, who asked to remain anonymous, told Reuters.

Internet watchdog NetBlocks said the internet had been cut in Sanandaj again amid protests in Kurdish areas.