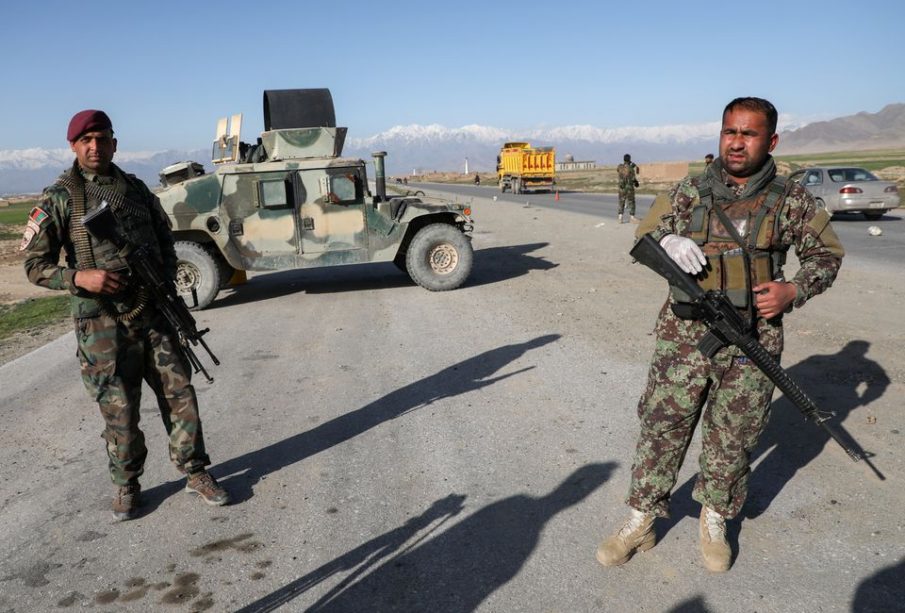 Afghan scrap dealers are picking over the detritus of the two-decade U.S. military intervention in Afghanistan, collecting whatever they can of value from heaps of broken military hardware, scrapped machines and old furniture.

While the scrap men search through junk outside the main U.S. base in Afghanistan, the Afghan government, and the country as a whole, are having to face up to the end of an international mission that promised so much but failed to bring peace.

“There’s just so much waste,” said scrap dealer Abdul Ahmad, outside the Bagram Airfield, about 50 km (31 miles) north of the capital, Kabul, as he surveyed the pickings.

“They didn’t do anything for us since they came and now they’re leaving us with an uncertain future and so much destruction.”

Over Afghanistan’s decades of war, the Bagram air base has been a grand prize for whoever holds the upper hand in the fight.

Now U.S. forces will hand it over to Afghan government forces as they face a surging war with the Taliban and questions swirl about their prospects.

Guards in body armour still control the heavily fortified entrance to Bagram – a favourite target for suicide bombers over the years – and helicopters clatter overhead and an occasional truck comes and goes.

But few people remain in the expanse of prefab facilities that grew up alongside the giant runway in the months and years after international forces arrived in late 2001, as the defeated Taliban fled from U.S. bombers to mountains on the Pakistani border.

Two U.S. security officials said this week the majority of U.S. military personnel would most likely be gone by July 4, with a residual force remaining to protect the embassy.

Last month, U.S. President Joe Biden told his Afghan counterpart, Ashraf Ghani, that “Afghans are going to have to decide their future, what they want”.

Ghani said his job was now to “manage the consequences” of the U.S. withdrawal.

This week, General Austin Miller, the top U.S.commander in Afghanistan, acknowledged the rapid loss of several districts to the Taliban was worrisome. Only “a political settlement” could establish peace among the warring Afghan sides, he said.

America’s allies, most of them NATO members, who have been supporting its efforts in Afghanistan are also packing up and getting out at the end of a mission that at its height was hailed as a worthy example of NATO unity and cooperation, and as a model for its operations.

In northern Afghanistan, Camp Marmal was the biggest German armed forces base outside their homeland. Its once bustling cafes, gyms, salon, handicraft shops, hospital and entertainment zones are all shut.

German forces shipped home the equivalent of about 800 containers of equipment including armoured vehicles, helicopters, weapons and ammunition. Even a 27-tonne war memorial was shipped to the German armed forces’ joint operations command in Potsdam.

The base has been handed over to Afghan forces.

Brigadier General Ansgar Meyer, the commander of German forces in Afghanistan, told Reuters in an interview before the German’s withdrawal that the hospitality of the Afghan people under the most difficult circumstances was something everyone could learn from.

“This is still one of the poorest countries in the world but the immense friendliness with which Afghans welcome anyone is amazing,” he said. “These are characteristic traits that we in Europe might want to copy.”

For the Taliban, fighting since 2001 to expel foreign forces, the departure of their enemies cannot come soon enough.

“Wherever the invaders have gone they leave a trail of destruction,” Taliban spokesperson Zabihullah Mujahid said of Western forces, adding that the Taliban remained on guard in case of any last-minute deception.

Michael Kugelman, deputy director of the Asia Programme at the Woodrow Wilson Center in Washington, said concrete gains were made over the two decades: “The removal of a brutal regime, the degrading of al Qaeda, and improvements in women’s rights.”

“But at the end of the day, the balance sheet on the NATO mission is sad and sobering. And the Afghan people that will pay the biggest price,” he said.