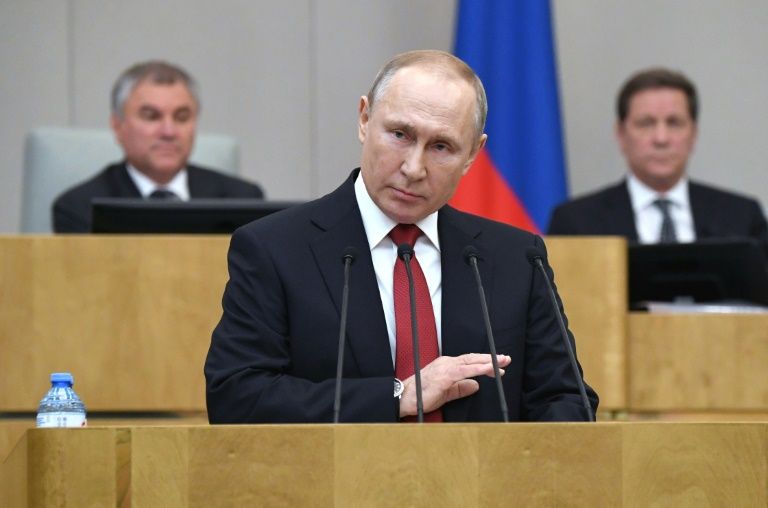 President Vladimir Putin (pictured March 10, 2020) stunned Russia when he backed a last-minute proposal to add a condition to the reform package for his possible return to the Kremlin after 2024, when he is constitutionally required to step down (AFP Photo/Alexey NIKOLSKY)

Russian President Vladimir Putin on Saturday signed the package of constitutional reforms he had proposed, including a clause giving him an option to run for two more terms.

The Kremlin has published the 68-page law spelling out the constitutional reforms on the official website. Putin’s signature triggers a special procedure for the package, which differs from the way laws usually go into effect.

The reforms were sent to the Russian Constitutional Court which has a week to rule on whether to approve the law, which would reset Putin’s constitutional limit on terms in power.

The law will then be voted on by the Russian public.-

A spokeswoman at the constitutional court told AFP on Saturday evening that judges had begun to review the reform package, but could not say when they will be issuing the decision.

The Kremlin has named April 22 as the day of the vote, and Russia’s Senate Speaker Valentina Matvienko on Saturday told journalists that the voting “must take place despite various worries about coronavirus.”

Some speculated in recent weeks that the Kremlin will initiate voting over the internet, which the opposition has slammed as a sure way to falsify the result.

Putin, 67, stunned the country on Tuesday when he backed a last-minute proposal to add a condition to the reform package for his possible return to the Kremlin after 2024, when he is constitutionally required to step down.

The measure, added on the day when the State Duma lower house was voting for the reforms, was swiftly passed and the bill subsequently sailed through the upper house and regional parliaments.

The Russian leader had proposed to change the constitution in January, but until this week denied that he is seeking to extend his rule. His spokesman said Putin changed his mind due to global instability.

The amendments also change the balance of power, increasing the role of the State Council advisory body, and giving both parliament and the president additional instruments of authority.

France closes all restaurants, cafes and shops to fight coronavirus