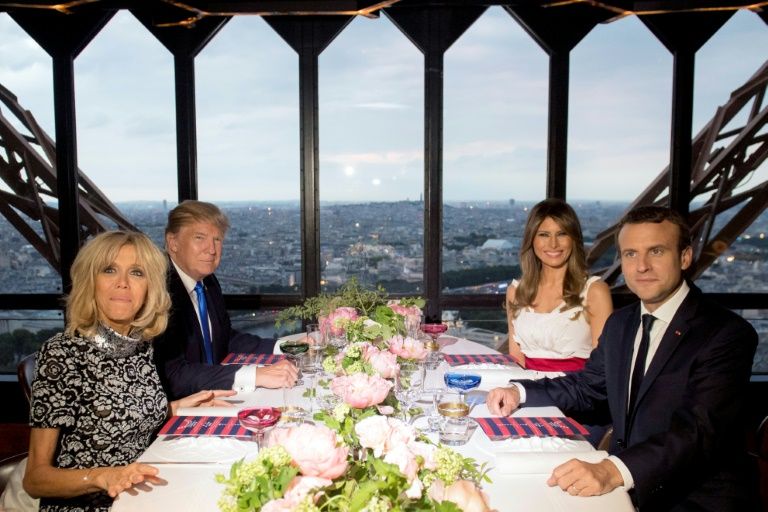 The ebullient French chef Frederic Anton is having none of the talk that the world will not be the same again after the coronavirus.

From the kitchen of his Jules Verne restaurant perched high on the Eiffel Tower 125 metres (410 feet) above Paris, the combative cook is determined that it will make not one iota of difference to the glories of French gastronomy.

“Nothing is going to change,” he declared, certainly not on the plate.

“The whole world loves to eat. The first day after the lockdown in Paris, restaurant terraces everywhere were full of people eating out.

“No one thought twice about it,” Anton told AFP. “France is the land of food after all.”

The superchef — who holds more Michelin stars than any other living chef — did not take well to Anton swiping the lease for the dining room, with its panoramic views, from under his nose.

Especially as it was there that Ducasse cooked for Donald and Melania Trump and the French first couple after the US president’s 2017 trip to Paris, where he was guest of honour at the Bastille Day celebration.

While many top chefs worried about whether their restaurants would ever open again because of the virus, Anton said that for him the lockdown was a “holiday”.

As well as dreaming up a summer menu — courgette and almond tarts, artichoke poivrade, crab with cavier and langoustine ravioli with smoked cream — he caught up on the whole eight seasons of “Game of Thrones”.

Not for him the soul-searching or the need to reinvent haute cuisine for the post-virus world.

“I am not going to question how a gastronomic restaurant works,” said Anton.

Unlike some top Paris eateries, he never seriously considered the possibility of doing takeaway meals.

“We thought about it for two minutes — it’s not necessary,” said Anton, whose other Paris restaurant, the three-star Le Pre Catelan, will not reopen until September.

Nor is he following the lead of other chefs and toying with simpler and cheaper menus.

The very best ingredients do not come cheap, Anton argued.

“We are never going to debate about whether to buy the best langoustines or lamb from the Pyrenees, we will buy them. And if it takes a lot of people to transform them, we will do it,” he insisted.

The Jules Verne’s multi-course tasting menus is just as sophisticated and as expensive as it ever was — between 190 and 230 euros ($260), without wine.

Seasonality is the great buzz word of the moment but Anton plays it down. “We have done that since the dawn of time,” declared the chef.

That said, all is not quite as it was before the virus.

Diners arriving in the private lift are separated from other clients by Plexiglass panels, though they can let their mask slip as soon as they are ushered to their table by the maitre d’ who, like the waiters, will be wearing a natty black mask.

There are also 12 fewer tables than before to ensure social distancing.

Unlike some, Anton has not re-emerged traumatised into the post-lockdown world.

Despite his restaurants being closed from one day to the next, he said that he rather enjoyed the lay off.

“I kicked back, I rested, and it has done me good,” he told AFP.

“I cooked whatever I found around me. I don’t think I’ve ever spent so much time in my kitchen at home,” Anton added.

And he wasn’t for a minute tempted to invent new recipes — “absolutely not” — nor give cookery classes on social media, like lots of other chefs.

“I was like everybody else. I tidied up at home, threw out 25 bags of stuff that I didn’t need and I watched the whole of ‘Game of Thrones’,” he said.