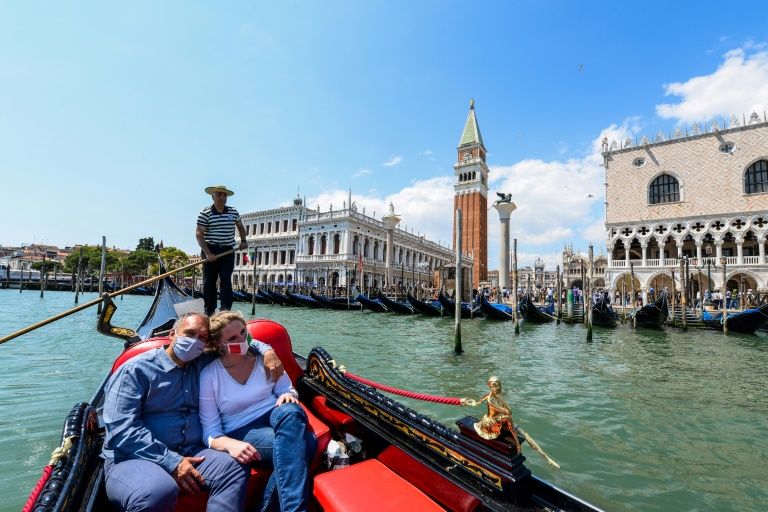 Business confidence in the eurozone’s third largest economy in May plummeted to its lowest level since official statistics institute ISTAT started the index in March 2005.

“The health and economic emergency has swept businesses away, especially in shops, services and tourism,” it said.

Its members are particularly concerned “by the lack of liquidity necessary to pay costs and salaries… we are close to a point of no return and that’s why the measures decided by the government (loan guarantees, SME subsidies) must be operational immediately,” said federation head Patrizia De Luise.

“We need to reduce bureaucracy and accelerate and simplify procedures, because if support is delayed again, many businesses will have no option but to stop,” she said.

The government last week accused banks of not acting quickly enough, but they said that they had already passed on around 400,000 loan requests worth more than 18 billion euros ($20 billion) to the state-backed Central Guarantee Fund.

Italy was the first European country to be hit by the pandemic and imposed a strict two-month lockdown which paralysed much of the country’s economic activity.

As a result, the country is set for a drop in GDP of between nine and 13 percent, the Bank of Italy said on Friday.

Data also showed that the economy shrank 5.3 percent in the first quarter — worse than the 4.7 percent initially estimated.

It had not seen such an “exceptional” decline in the first quarter since 1995, ISTAT said.

This year’s losses could amount to 170 billion euros, equivalent to the GDP of Veneto, Italy’s third biggest industrial region, a Mediobanca study said.

The head of the country’s main business confederation Cofindustria, Carlo Bonomi, said that up to a million jobs could be threatened nationwide.

“We’re waiting for figures at the end of May but indications are that between 700,000 and a million jobs are in danger,” he said.

“Jobs are only created if there is growth, innovation, investment. The car manufacturing crisis can’t be solved with subsidies or furloughing. You solve it by looking to the future, by investing in new technologies,” he said.

Italy is set to be the main beneficiary of a European Union 750-billion-euro recovery plan but it still may not be enough.

Italian citizens are slightly more optimistic, but far from celebrating. The pandemic has killed over 30,000 people.

While the state has paid for furloughs or handouts for those no longer able to work, many have slipped through the net.

They include Eleonora Fogliacco, 35, a fitness and swimming teacher in Lombardy, the hardest hit region where gyms were ordered closed at the end of February.

“I didn’t qualify for the 600-euro monthly government handout because I earned more than 10,000 euros last year,” she told AFP.

“During the crisis I had peaceful days and days when I felt completely lost, without any state help. I could no longer see the future and I didn’t know what to hold onto,” she said.

“I don’t buy anything. I depend on my partner for the shopping,” said Fogliacco.

“This situation has changed everybody’s way of life (and) everything will be very complicated” in the future, she added.

Because of lockdown, 42 percent of families have had to reduce their work and income, 26 percent have stopped work and 24 percent have been furloughed.

Six out of 10 families fear losing a job, as a result of which 28 percent have decided to take no holidays nor long weekends.