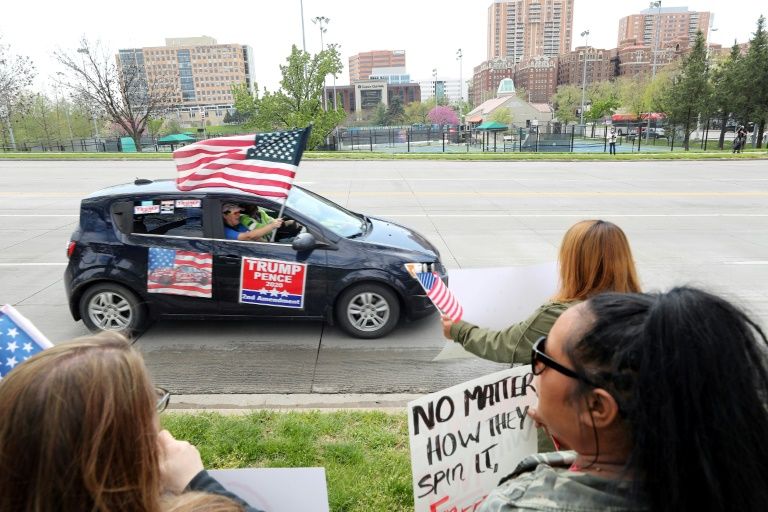 A supporter of President Donald Trump in Kansas City, Missouri waves an American flag during a protest against restrictions imposed on businesses to fight the COVID-19 pandemic (AFP Photo/JAMIE SQUIRE)

The US state of Missouri has sued China’s leadership over the coronavirus, prompting an angry rebuke from Beijing Wednesday over the “absurd” claim.

Missouri is seeking damages over what it described as deliberate deception and insufficient action to stop the pandemic.

The first-of-a-kind state lawsuit comes amid calls in Congress to punish China and a campaign by President Donald Trump to focus on Beijing’s role as he faces criticism over his own handling of the crisis.

Missouri — led by Trump’s Republican Party — filed a lawsuit in a federal court seeking an unspecified amount in damages and an injunction on continuing actions by China that are alleged to include hoarding of protective equipment.

“The Chinese government lied to the world about the danger and contagious nature of COVID-19, silenced whistleblowers and did little to stop the spread of the disease,” Missouri Attorney General Eric Schmitt said.

“They must be held accountable for their actions,” he said.

The lawsuit’s chances of success are far from certain as US law, under the principle of sovereign immunity, generally forbids court action against foreign governments.

Missouri addressed the issue by suing the ruling Communist Party, arguing that it is not formally an organ of the Chinese state.

Citing an estimate that Missouri may lose tens of billions of dollars due to the virus and action to prevent it, the lawsuit accused the Chinese Communist Party of being in “knowing, willful and in reckless disregard of the rights of the state and its residents.”

The lawsuit pointed to Chinese authorities’ early suppression of news of the virus when it broke out in Wuhan, including the silencing of whistleblowers.

It also noted that China initially said there was no evidence of human-to-human transmission.

The virus first emerged late last year in the central Chinese city of Wuhan, and China’s foreign ministry said Wednesday that it had been sharing information with the US government since January 3.

“This so-called accusation, which has no factual and legal basis, is absurd,” foreign ministry spokesman Geng Shuang said at a regular press briefing.

“Since the outbreak began, the Chinese government has always acted in an open, transparent and responsible way,” he said.

Despite Trump’s heavy criticism of China, his administration has been lukewarm about efforts to take action against Beijing, mindful that the Asian power is a major source of masks and other medical supplies desperately needed by the United States.

Under its conservative leadership, Missouri has imposed fewer COVID-19 restrictions than most US states, including allowing businesses to remain open as long as they limit the number of people present and ensure space between them.

Missouri as of Tuesday had reported 189 COVID-19 deaths, half of them in St. Louis.

Spain to let children out, aims for lockdown easing by late May