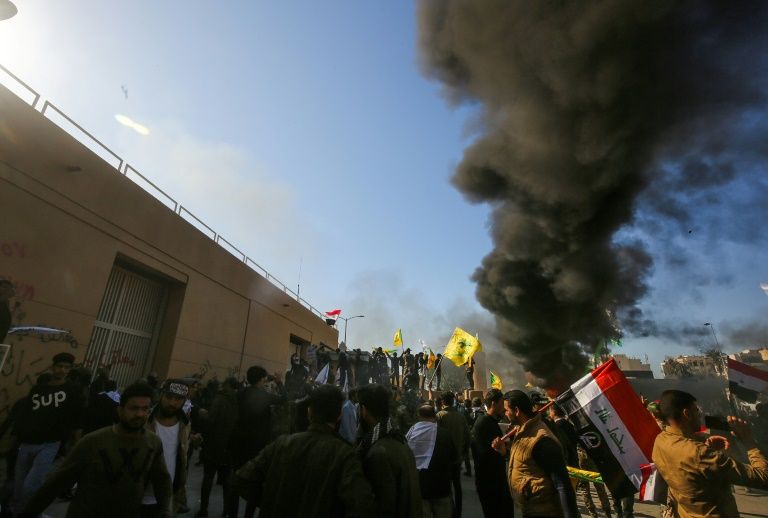 While congratulating the 27 of the 193 member nations that did issue statements condemning the December 31 attempt to storm the compound, the US mission to the UN said Russian and Chinese silence undermined the Security Council.

The United States on Monday slammed Russia and China for their failure to condemn an attack last week on its Baghdad embassy by pro-Iranian demonstrators.

“Not allowing the United Nations Security Council to issue the most basic of statements underscoring the inviolability of diplomatic and consular premises once again calls the council’s credibility into question,” the US statement said.

Washington said that voicing support for the 1961 Vienna convention that protects diplomatic missions “should not be controversial or warrant courage.”-

“As we have demonstrated, we will not tolerate attacks on US personnel and facilities and will respond decisively to protect our interests, citizens and allies,” it added.

The attack on the Baghdad embassy, which did not result in any injuries, was meant to protest against a US airstrike against Ketaeb Hezbollah (KH), an Iranian-backed militia which the US blames for rocket attacks on its facilities in northern Iraq that resulted in the death of a US contractor.

President Donald Trump responded to the embassy attack by ordering a drone strike in Baghdad that killed one of Iran’s top military commanders, Qasem Soleimani, and the head of the KH militia.

Russia and China rejected the US allegations, saying in a statement they could not disregard the US killing of Soleimani and the Iraqi general.

“As a principle, we condemn strongly any attack on any embassy anywhere in the world,” Russian ambassador to the UN Vassily Nebenzia told reporters.

“The statement was nearly ready, and it was agreed upon, at least with us, with the US.”

But when news of the January 3 drone strike emerged, it wasn’t possible to disregard “the whole context.”

“China does not accept the US accusation,” China’s UN ambassador Zhang Jun added.

“China firmly supports the protection of the safety of foreign missions in accordance with international law. The US unilateral military action has led to drastic changes in (the) regional situation.”

He added that any Security Council action “should reflect latest developments of the situation and help prevent escalation of tensions.”

UN sources said Monday that no country had so far called for a Security Council meeting to address the soaring tensions that the attacks have triggered in the Middle East.