US declares virus emergency as new epicenter Europe locks down 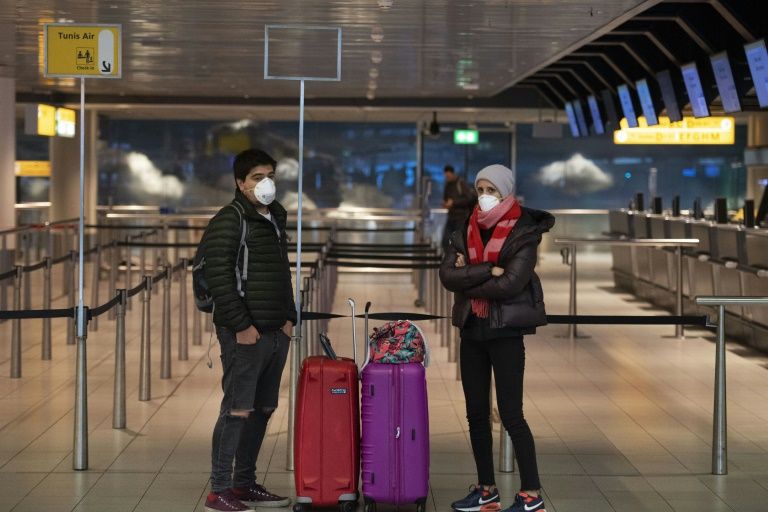 COVID-19, which first emerged in China in December, has spread relentlessly around the world even as cases in Asia have levelled out in recent days (AFP Photo/Olaf KRAAK)

US President Donald Trump declared a national state of emergency as the World Health Organization named Europe the new epicenter of the coronavirus and more countries scrambled Saturday to slow the expanding pandemic by shutting borders and closing businesses.

Saudi Arabia said it would suspend international flights while Russia announced plans to close its land borders with Poland and Norway to foreigners as COVID-19 spreads relentlessly around the world.

That followed a rally on Wall Street Friday as financial markets endured a rollercoaster ride after a week of spectacular losses triggered by fears that the deadly outbreak will lead to a global recession.

“To unleash the full power of the federal government, I’m officially declaring a national emergency,” Trump said, announcing $50 billion in federal funds to battle the contagion.-

The measure came as infections and deaths soared in Europe, with WHO chief Tedros Adhanom Ghebreyesus saying the continent now had “more reported cases and deaths than the rest of the world combined, apart from China.”

He described it as a “tragic milestone”, and warned it was impossible to say when the virus would peak globally.

The overall death toll jumped to more than 5,000, including nearly 1,500 in Europe, with total infections topping 140,000 internationally, according to an AFP tally based on official sources.

Italy, Spain as well as Iran — which have emerged as virus hotspots — all clocked a dramatic rise in cases and fatalities in the past 24 hours, while infections were reported in Kenya and Ethiopia, the first in east Africa.

Venezuela declared a “state of alert” after confirming its first two cases, and Colombia closed its border with Venezuela and restricted the entry of foreigners who have been to Europe and Asia in the last 14 days.

Governments have been pushing through tough restrictions to contain the spread of the disease and unveiling big-bang emergency funding plans to try to limit the economic damage.

Trump said the US would buy large quantities of crude oil for strategic reserves and waived student loan interest during the crisis, stressing that the “next eight weeks were critical.”

The US House of Representatives also overwhelmingly passed a virus relief package early Saturday for Americans hit by the outbreak.

Leaders of the G7, the world’s richest economies, will hold an extraordinary summit via videoconference on Monday to discuss the pandemic.

The virus has torn up the sporting and cultural calendar, with top-flight events from Broadway to English Premier League football scrapped. Japan has furiously denied any question mark over the Tokyo Olympics after Trump said “maybe they postpone it for a year”.

The outbreak reached new heights with several public figures from Hollywood actors to politicians and even the Canadian first lady catching the infection.

Apple CEO Tim Cook announced Friday that the tech giant would close all of it stores for two weeks outside China, where it has just reopened its retail shops.

The California-based firm has about 500 stores in 24 countries around the world.

China this week claimed “the peak” of the pandemic had passed its shores although it still has the biggest overall number of deaths and infections.

Beijing reported just 11 infections on Saturday, and for first time since the start of the outbreak the majority of them were imported cases from overseas.

South Korea, once grappling with the largest outbreak outside China, saw newly recovered patients exceed fresh infections for the first time and the lowest number of new cases for three weeks.

Italy, the hardest-hit country in Europe, recorded its highest one-day toll with 250 deaths over the past 24 hours, while Spain declared a state of alert after its infections raced past 3,000.

A raft of European countries shut their borders to foreigners, closed non-essential businesses, restaurants and hotels and museums, and banned public gatherings.

France, the world’s most visited country, closed the Eiffel Tower and the Louvre over what President Emmanuel Macron called “the worst health crisis in France in a century.”

The Czech government also closed most shops, restaurants and pubs in the country on Saturday.

The new measures came after Trump this week banned all travelers from mainland Europe for 30 days, prompting a swift rebuke from Brussels which is scrambling to shore up the EU economy.

US schools are closing across the country and an increasing number of Americans are staying home, while Louisiana became the first state to postpone its Democratic presidential primary.

The Pentagon banned all its military and civilian personnel from domestic travel from Monday to help stop the spread of the virus.

Asian stocks tumbled in volatile business following the worst day on Wall Street since the crash of 1987 as traders scrambled to sell, wiping trillions off market valuations. The Dow closed up 9.4 percent following Trump’s emergency measures.

The virus is weighing heavily on daily life. Shops, squares and cafes normally packed with people are deserted in Italy, which has imposed nationwide lockdown measures never-before-seen in peacetime.

The illness is sparing no-one. Canadian Prime Minister Justin Trudeau and his wife who tested positive are in self-imposed quarantine, while Hollywood star Tom Hanks said he and his wife were infected.

In Britain, where the government’s softly-softly strategy has raised some eyebrows, Queen Elizabeth II has put off engagements, and local elections planned for May have been cancelled.