US death toll tops 50,000 as some Georgia businesses reopen

The Times of Earth, International Edition
0
808 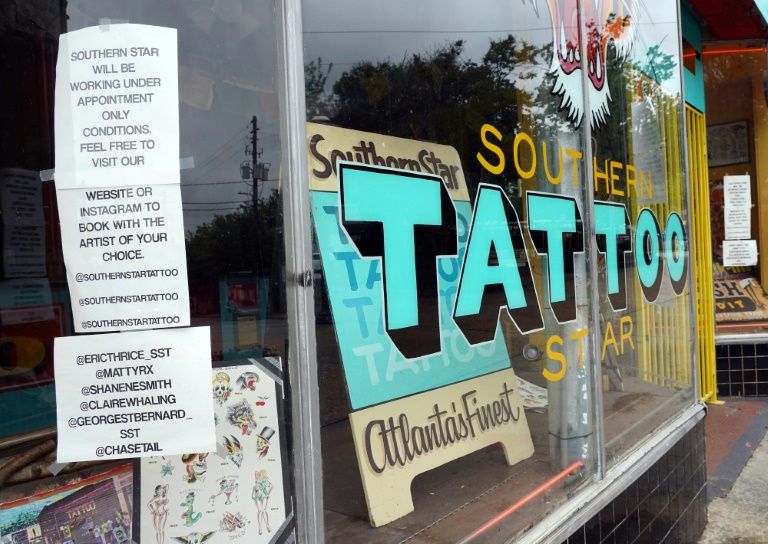 Gyms, hair salons and tattoo parlors had a green light to reopen in the US state of Georgia on Friday as the death toll from the coronavirus pandemic soared past 50,000 in the United States.

As the southern state lifted restrictions on some businesses, President Donald Trump took to Twitter to warn that Governor Brian Kemp, a political ally, may be moving too fast.

At the same time, Trump said he had told Kemp, a Republican, “to do what is right for the great people of Georgia (& USA)!”

The mixed messaging was the latest from a president whose remarks from the White House podium have frequently raised eyebrows, including a suggestion on Thursday that disinfectant could be injected to treat patients with COVID-19.

Chris Edwards, owner of the Peachtree Battle Barber Shop, said he was “happy” about being allowed to reopen his store in an Atlanta strip mall, where most businesses nevertheless remained closed.

“I’m a small businessman,” Edwards told AFP as he gave a trim to a middle-aged man, a physician who declined to be identified.

Edwards was wearing a mask, but the customer in his chair was not. The barber said he had opened at 7:00 am and had already had five or six customers.

Rob Flat, owner of Tried and True Tattoo a few blocks away, said he was only taking appointments, not walk-ins, but had not had any customers yet.

“We’re definitely looking forward to opening, but we want to be responsible,” Flat said.

At his press conference on Thursday, Trump said he wanted to reopen the country but Georgia’s move may be premature.

“I don’t want this thing to flare up because you’re doing something not in the (social distancing) guidelines,” he said.

The White House pushed back meanwhile at criticism of Trump after he mused that researchers might investigate ways of injecting disinfectant to cure the disease — comments dismissed by experts as reckless.

“Leave it to the media to irresponsibly take President Trump out of context and run with negative headlines,” White House spokeswoman Kayleigh McEnany said.

Thursday’s White House briefing was focused on research suggesting the virus was quickly destroyed by sunlight, and also touched on disinfectants that can kill the novel coronavirus.

That prompted Trump to speculate about whether it would be possible to bring “the light inside the body.”

“And then I see the disinfectant, where it knocks it out in a minute,” Trump continued. “Is there a way we can do something like that, by injection inside or almost a cleaning?”

At least two manufacturers of cleaning products sold in the United States issued statements after Trump’s remarks, warning people against using them as a treatment.

The United States is the country the hardest-hit by the virus with more than 870,000 confirmed cases and 50,000 deaths as of Friday, according to a toll by Johns Hopkins University.

Kemp’s reopening plan has also met with criticism from some business owners in the Peach State who voiced fears it is too soon.

“This is an irresponsible move that is based solely on dollars over science,” Randy Adler, owner of Babs Midtown restaurant, told AFP.

His eatery is currently only open for take-out, and the 58-year-old winced at the potential risks tied to allowing sit-down service in coming days.

“It is not the right thing to do,” he said. “We value our staff, we value our clientele, and we value the citizens of Georgia.”

The southeastern state’s bid to jumpstart thousands of teetering businesses is the most aggressive return-to-normalcy effort in the nation.

Restaurants, theaters and private social clubs can open from Monday, providing social distancing and mask-wearing guidelines are in place.

But infections and deaths continue to rise in Georgia, and concern has surged that easing shelter-in-place orders too early could trigger new outbreaks.

Georgia’s coronavirus figures are far lower than those in New York, the US epicenter of the virus, but they are substantial.

The state has more than 21,880 confirmed cases as of Thursday, with 881 deaths, according to a Johns Hopkins tally.

Biden predicts Trump will try to postpone US election