US cruise ship in limbo as anti-virus controls spread

The Times of Earth, International Edition
0
663 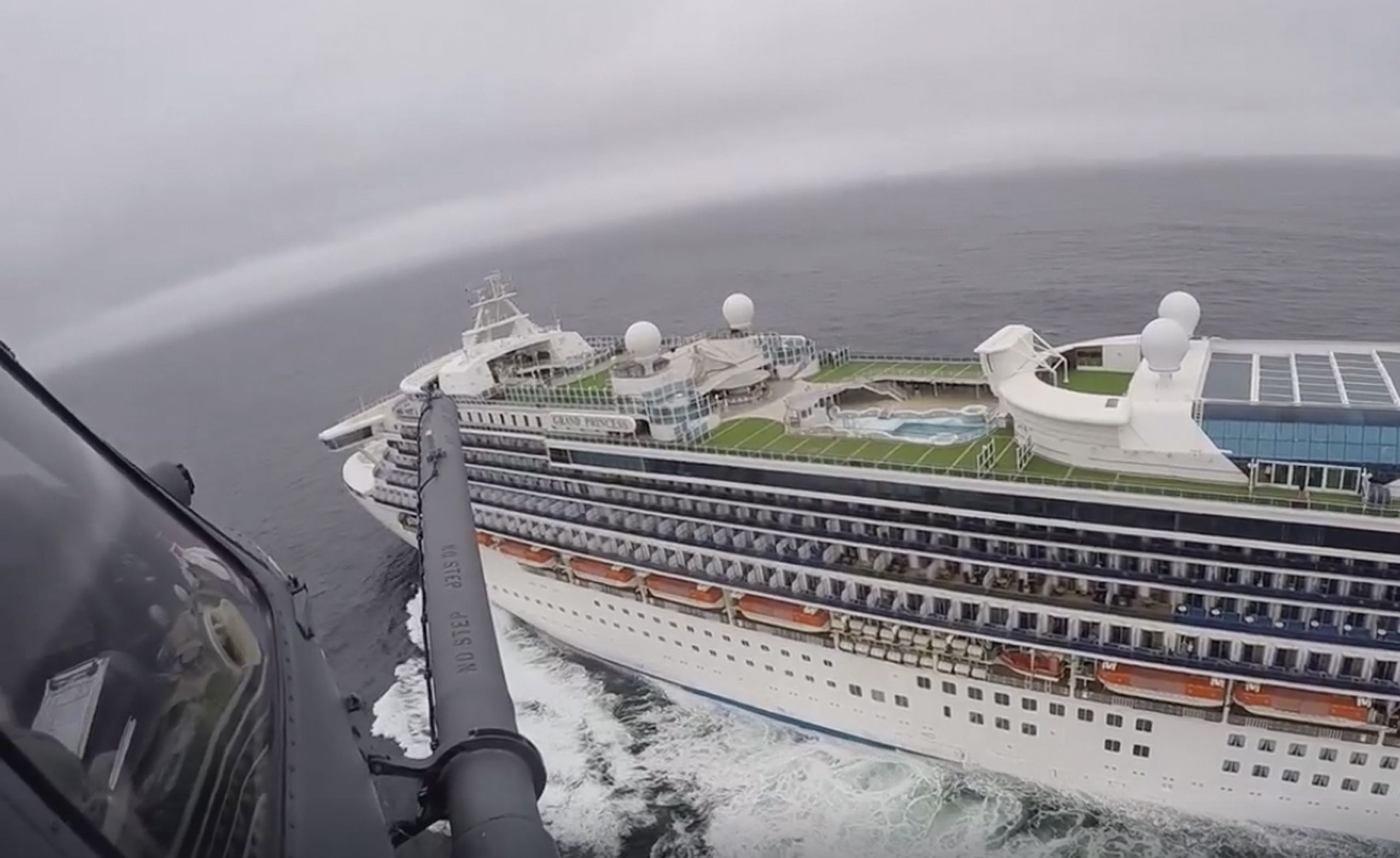 In this image from video, provided by the California National Guard, a helicopter carrying airmen with the 129th Rescue Wing flies over the Grand Princess cruise ship off the coast of California Thursday, March 5, 2020. AP

Officials in California were deciding Saturday where to dock a cruise ship with 21 coronavirus cases aboard and four U.S. universities canceled in-person classes as Western countries imitate China by imposing travel controls and shutting down public events to contain the outbreak.

The Grand Princess cruise ship was waiting off San Francisco with 3,500 people aboard. Authorities want it to go to a non-commercial port for everyone aboard to be tested amid evidence the ship was the breeding ground for a deadly cluster of 10 cases during an earlier voyage.

“Those that will need to be quarantined will be quarantined. Those who will require medical help will receive it,” said Vice President Mike Pence.

President Donald Trump, speaking at the U.S. Centers for Disease Control and Prevention in Atlanta, said he would have preferred not to let the passengers disembark onto American soil but would defer to the recommendations of medical experts.-

In Egypt, a cruise ship on the Nile with more than 150 passengers and crew was under quarantine in the southern city of Luxor after 12 people tested positive for the virus. The passengers include American, French and Indian travelers.

A Taiwanese-American passenger tested positive after returning to Taiwan in February, Egyptian health authorities said. A health official said the 12 people who tested positive were isolated inside the ship while the rest await results.

The incident raised Egypt’s total number of cases to 15.

Also Saturday, the port of Penang in Malaysia turned away the cruise ship Costa Fortuna with 2,000 passengers and crew because there were 64 people aboard from Italy, the center of Europe’s epidemic. It was the second port to reject the ship after Phuket in Thailand on Friday.

The Costa Fortuna was making its way to Singapore, according to Phee Boon Poh, an executive councilor of Penang state.

South Korea, the hardest-hit country outside China, reported 448 new cases for a total of 7,041.

China, where the disease first emerged in December, reported 99 new cases on Saturday, its first daily increase of less than 100 since Jan. 20. The government reported 28 deaths in the 24 hours through midnight Friday.

The epidemic appears to be easing in China but countries elsewhere are reporting increasing numbers of cases.

The World Health Organization has warned against “false hopes” that the disease will fade when warmer summer weather arrives in northern countries.

The Netherlands reported its first virus death Friday. Serbia and Slovakia in Europe, Peru and Colombia in Latin America and Togo and Cameroon in Africa announced their first infections.

Authorities in Florida reported the first two U.S. deaths away from the West Coast. They said the two patients were in their 70s and one had underlying health problems.

The University of Washington and two other universities said campuses in Seattle would hold classes online instead of in-person. Stanford University, south of San Francisco, announced similar plans.

Also in Seattle, Starbucks announced an employee of one of its cafes was diagnosed with COVID-19, the disease caused by the virus. The company said the store would reopen after a “deep clean.”

On Saturday, South Korean officials said a Korean Air flight attendant who was in Los Angeles on Feb. 18-21 has tested positive for the coronavirus.

The 100,000 figure of global infections dwarfs other major outbreaks such as SARS, MERS and Ebola. The virus is still much less widespread than annual flu epidemics, which cause up to 5 million severe cases around the world and 290,000 to 650,000 deaths annually, according to the World Health Organization.

Governments have imposed restrictions on visitors from China, South Korea, Italy and Iran.

In Switzlerand, which reported 210 new cases Friday, the military was being readied to provide support services at hospitals. Serbia said it might deploy the army.

The top U.N. climate change official said her agency won’t hold meetings in person until the end of April.

French Health Minister Olivier Veran said children would be banned from visiting patients in hospitals and other health facilities. He said patients would be allowed one adult visitor at a time.

Spanish officials announced a monthlong closure of 200 centers in and around Madrid where the elderly go for daytime care and activities.

The global economy faces mounting damage due to anti-virus controls that shut down much of China’s economy and are disrupting travel and trade worldwide.

Airlines, hotels, cinemas and other businesses have lost billions of dollars in potential revenue.

China, the world’s biggest trader, reported Saturday its exports tumbled 17.2% from a year earlier in January and February. Imports sank 4%.

China extended its Lunar New Year holiday to keep factories and offices empty. That sent shockwaves through Asian economies that supply components and raw materials to manufacturers who produce the world’s smartphones, toys and other consumer goods.

Chinese manufacturers are reopening but aren’t expected to return to normal production until at least April.

A total of 78 million migrant workers have returned to work, or about 60% of those who went to their hometowns for the Lunar New Year, the Ministry of Human Resources and Social Security announced Saturday.

Chinese authorities have eased some travel controls but most people in Wuhan, a central city of 11 million people where the first cases were reported, still are barred from leaving their homes.

A deputy premier, Sun Chunlan, who visited a Wuhan apartment complex this week was met with complaints that its management neglected sanitation and food delivery. Residents said the complex was hurriedly cleaned just before Sun’s visit.

“It’s all fake!” a resident can be heard shouting on videos circulated on social media. A commentary in the main Communist Party newspaper, People’s Daily, criticized the apartment managers for trying to deceive officials.

In Iran, the number of infections rose beyond 4,700, with 124 deaths. Iran set up checkpoints to limit travel and had firefighters spray disinfectant on an 18-kilometer (11-mile) stretch of Tehran’s most famous avenue.

Off the California coast, passengers on the Grand Princess waited in their cabins for word on its fate.

The ship was bound from Hawaii to San Francisco when it was ordered Wednesday to keep its distance from shore so 46 people with possible coronavirus symptoms could be tested.

On Thursday, a military helicopter crew lowered test kits onto the 951-foot (290-meter) ship by rope and later flew them for analysis at a state lab. The tests were ordered following the death of a passenger who was on a previous voyage in February.

Authorities say at least 10 other people on the same journey also were infected. Some passengers on that trip stayed aboard, which increased crew members’ potential exposure to the virus.