US announces support for patent waiver on Covid vaccines 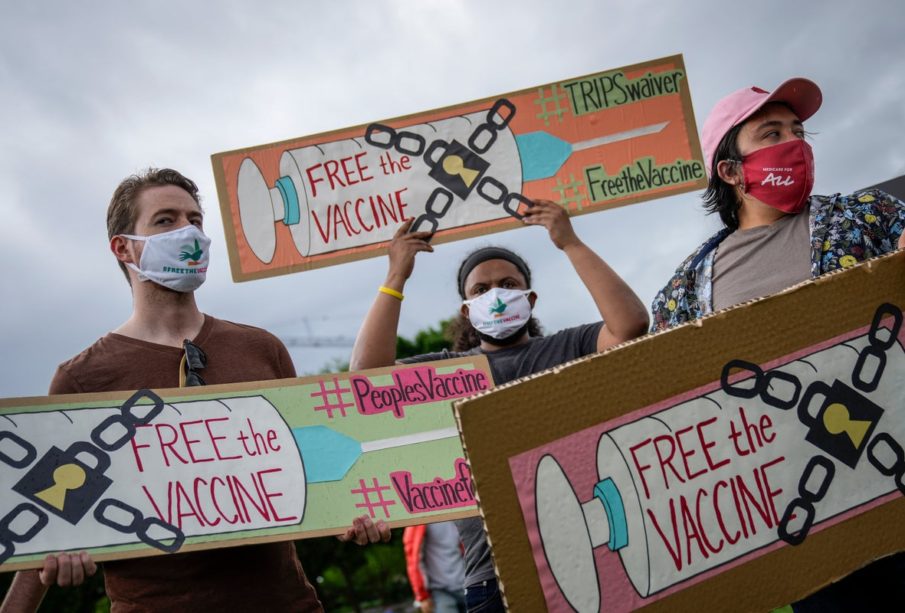 The United States threw its weight behind a waiver on patent protections for Covid-19 vaccines as India Thursday posted record deaths and infections from a catastrophic wave swamping the country.

Rich nations have faced accusations of hoarding shots while poor countries struggle to get inoculation programs off the ground, with the virus surging across the developing world in contrast to the easing of restrictions in Europe and the United States.

WHO chief Tedros Adhanom Ghebreyesus praised the “historic” move and said it marked “a monumental moment in the fight against Covid-19”.

But it was opposed by a consortium of big pharmaceutical companies, which described the decision as “disappointing” and warned it could hamper innovation.

India has been leading the fight to allow more drugmakers to manufacture the vaccines, as it faces a surge that has seen patients die in streets outside hospitals due to bed and medical oxygen shortages.

The country Thursday reported almost 4,000 Covid-19 deaths and more than 412,000 infections, both new records, dashing hopes that the catastrophic recent surge may have been easing following several days of falling case numbers.

A top Indian official Wednesday warned that the worst could still be to come, describing a third wave as “inevitable given the high levels of circulating virus” and saying the country badly needs more oxygen from other countries.

Consignments of oxygen and equipment have been arriving from the United States, France, Britain, Russia and other countries in recent days, but another official said India will need even more to fight the surge until numbers stabilize.

“If we could get more oxygen more lives would be saved,” the top government official told reporters, speaking on condition of anonymity.

Also seeing rising coronavirus cases is Egypt, which announced a partial shutdown of malls and restaurants and called off festivities for the Muslim holiday of Eid al-Fitr to curb the spread.

The country has now recorded nearly 232,000 positive cases including more than 13,000 deaths, with Prime Minister Mostafa Madbouli saying it was in a “third wave”.

He said about 1.7 million people had been fined in recent months for not wearing face masks and that hundreds of thousands of shishas (water pipes) had been seized from cafes that breached Covid regulations.

Eid celebrations are also due to be disrupted in Muslim-majority Malaysia, where new rules in the capital Kuala Lumpur will see only essential businesses allowed to operate and restaurant dining-in banned after daily cases topped 3,000 in recent days.

Authorities were similarly moving to stem a cluster in the Australian city of Sydney on Thursday, where two new infections sparked a hunt for the source of its first local Covid-19 cases in more than a month.

Five million residents will again have to wear masks on public transport and in indoor venues, while New Zealand said it would put a travel bubble with the state of New South Wales on hold until the source of the infection was better understood.

Joining India in breaking records for Covid-19 deaths this week is Argentina, which recorded 633 deaths in 24 hours on Wednesday despite stepped-up measures to reduce the movement of people across the country.

In neighbouring Brazil, far-right leader Jair Bolsonara said the novel coronavirus may have been made in a laboratory to wage “biological warfare”.

The comments are likely to strain Brazil’s relations with China, and they echo claims by former US president Donald Trump that have been dismissed by the World Health Organization as “extremely unlikely”.

Bolsonaro — currently under investigation over his administration’s handling of the virus — has fought calls from experts for restrictive measures across Brazil, where shortages of vaccines this week forced several cities to suspend administering second doses.

Brazil is far from the only poorer country to lag behind in immunization — more than 1.2 billion vaccine doses have been administered globally, but fewer than one percent in the world’s least developed countries.