The Times of Earth, International Edition
0
696 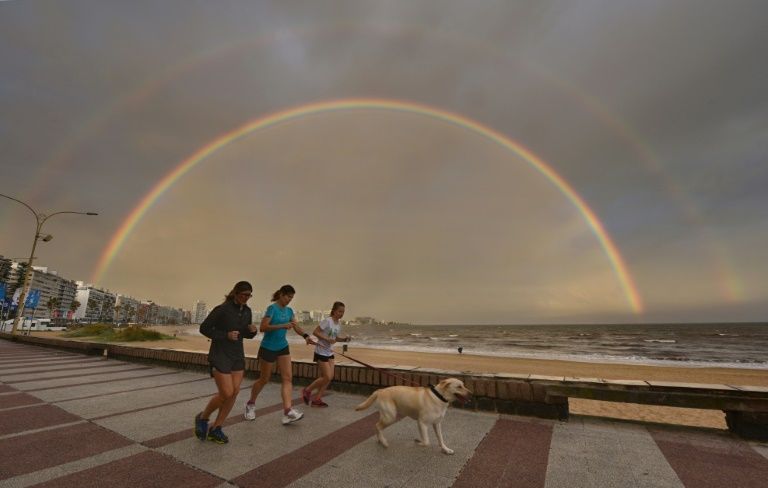 Women jog along the seafront of Uruguay's capital Montevideo, where government strategy has kept the coronavirus pandemic under control (AFP Photo/Mariana SUAREZ)

Uruguay’s president was recently photographed surfing in the early morning ahead of a cabinet meeting, symbolizing his government’s relief that a policy of “freedom with responsibility” in containing the COVID-19 pandemic is succeeding.

Photos of 47-year-old Luis Lacalle Pou emerging from the South Atlantic in a wetsuit with a board under his arm and a smile on his lips hit the newsstands on Tuesday, as Europe reopened its borders to 15 countries.

The list included only one Latin American country: Uruguay.

With less than 1,000 registered novel coronavirus cases and just 27 deaths, the country of 3.4 million is a notable exception in a region that has become the epicenter of the global health crisis.

Uruguay currently has just 83 active cases, while its giant neighbor Brazil is the world’s worst-hit country after the United States.

This success is especially remarkable as there never was an official lockdown.

– Closures, but no lockdown –

Instead, amid industry furloughs and school and border closures, officials urged people to stay indoors and strictly adhere to social distancing.

The message was drilled home in the media and by police helicopters flying overhead.

The center-right president, who took office in early March as the pandemic was heating up, has said he opted for “individual freedom” rather than “a police regime.”

The calls for self-isolation were widely followed.

“The early appearance of well known cases, at a time when the circulation of the virus within the population was very limited, led to adequate measures being implemented — even if at the time they seemed exaggerated — right at the start of the school year,” Galiana said, referring to the southern hemisphere’s school year.

Uruguay’s demographics were also in its favor, given a low population density and the absence of large urban centers outside of the capital Montevideo.

Uruguay chose to ease back to normal gradually, beginning in April with the return of 45,000 construction workers. Later, cafes and restaurants reopened, followed by gyms in May.

Shopping centers reopened in mid-June and football, the national passion, is due to resume on August 15, though in empty stadiums.

The economic shock however has been considerable: 200,000 people are unemployed, a massive spike from the 10,000 at the start of the pandemic. Exports fell 16 percent in the first half of the year, and GDP is expected to fall by 3.0 percent this year.

The IMF is forecasting a 9.4 percent contraction for all of Latin America this year.

The government is also relaxing requirements in a bid to attract foreign investment.

This week, Uruguay became the first country in the region to allow schools, colleges and universities to reopen.

The government however is refusing to declare victory, fearing flare-ups or even a second wave. Meanwhile, after three months of voluntary confinement, Uruguayans are easing back into a semblance of normality.

In February work started on the first tests to screen for the virus, said Henry Cohen, a specialist on the government’s COVID-19 advisory board. “Today we have more than the country needs,” he said.

Spanish carrier Iberia is to resume direct flights between Madrid and Montevideo on Sunday, though land borders with Brazil and Argentina remain closed.

Facundo Caballero, 29, has been waiting to join his girlfriend in Europe since his flight to Paris was canceled in March.

“I’ve been waiting for someone to tell me ‘go ahead’ and I’ll go for it. You never know if there is a second wave and I have to stay here longer,” he said.

More than 100 dead in Myanmar jade mine landslide