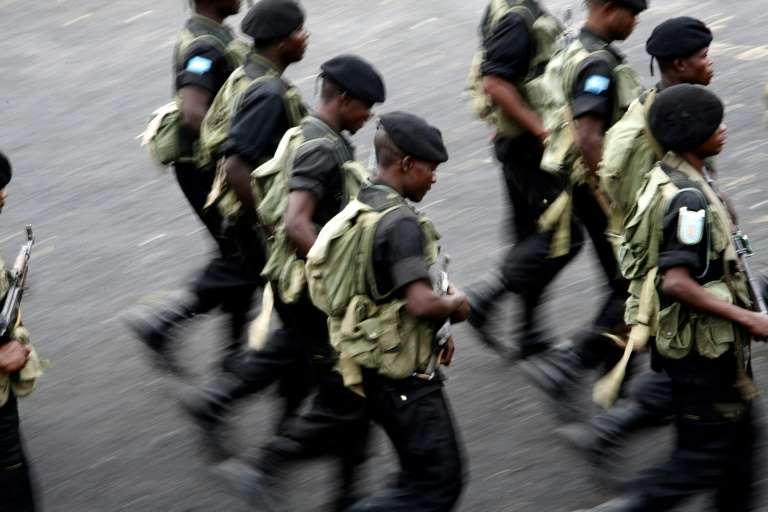 The Republican Guard is tasked with protecting DR Congo's head of state. AFP

The United Nations has sounded a warning about a brewing political crisis in the Democratic Republic of Congo, where a long-running impasse between President Felix Tshisekedi and supporters of his predecessor Joseph Kabila has reached a crucial point.

In a report to the UN Security Council on Monday, Secretary General Antonio Guterres said he was “concerned by the political tensions within the ruling coalition.”

These “could undermine the fragile political stability, reverse the gains made since the 2018 elections and the resulting peaceful transfer of power, as well as divert efforts to address security challenges” in the east of the vast country, he warned.

The report, obtained by AFP on Wednesday, coincided with a video circulating on social media in which the head of DR Congo’s elite Republican Guard — which is tasked with protecting Tshisekedi — orders his men “not to plot against the government.”

The upper ranks of the armed forces are dominated by officers appointed by Kabila, who stepped down in January 2019 after 18 years ruling one of Africa’s most volatile countries.

His handover marked the DRC’s first peaceful transition since independence from Belgium in 1960.

But Tshisekedi’s manifesto of reform has been crimped by the need to work within the constrictions of a coalition controlled by Kabila loyalists.

Their Common Front for the Congo (FCC) has an overwhelming majority in parliament.

The tension burst into the open after Tshisekedi in July named three new justices to the top court, the Constitutional Council, overriding strong protests from the FCC.

In a broadcast two days later, Tshisekedi acknowledged disagreements over national security, the management of state assets, the independence of the judiciary and the organisation of elections.

On November 2, he launched talks with “political and social forces in all their diversity”, aimed at uniting them “around a shared vision of governance known as the sacred union of the nation,” in the words of his spokesman.

The president is now preparing to announce his decisions after these consultations.

When the announcement will be made and what they will say has stoked huge speculation in the capital Kinshasa.

Leaders in the president’s own party, the UDPS, have been urging Tshisekedi to walk away from an unpublished pact that he forged with Kabila in January 2019.

On the presidency’s Facebook page, Tshisekedi’s media managers on Wednesday said the FCC was a “serious obstacle… through its members in government and the two chambers of parliament.”

Consultations “tend towards a recalibration of this ‘artificial’ majority… with a recomposition of alliances” to enable Tshisekedi to fulfil his role, it said.

Whether these remarks point to a dissolution of the National Assembly, a request by the coalition government to step down or an attempt to forge a different coalition remains unclear.

Pro-Kabila legislators account for 305 out of 500 seats in the National Assembly, for which elections were held in December 2018 alongside the presidential vote.

In the Senate, the FCC has more than 90 out of 109 seats, one of which was awarded to Kabila himself, named senator for life. The FCC also holds virtually all of the country’s 26 provincial governorships.

In a video that began circulating on social media on Monday, the head of the Republican Guard, Major-General Christian Tshiwewe, told his troops: “I urge you not to plot against the government by taking part in clandestine meetings.”

“Remain patriots, imbued by loyalty (and) allegiance to the head of state,” he said.

They “gave an assurance about your supreme authority — no campaign of sedition, of any kind, will shake our civil commitment and our determination to remain apolitical,” army spokesman General Leon Kasonga said in a video released by the presidency.

“We are in a very tense situation,” a diplomat said. Tshisekedi “absolutely wants to be reassured about the army’s loyalty.”