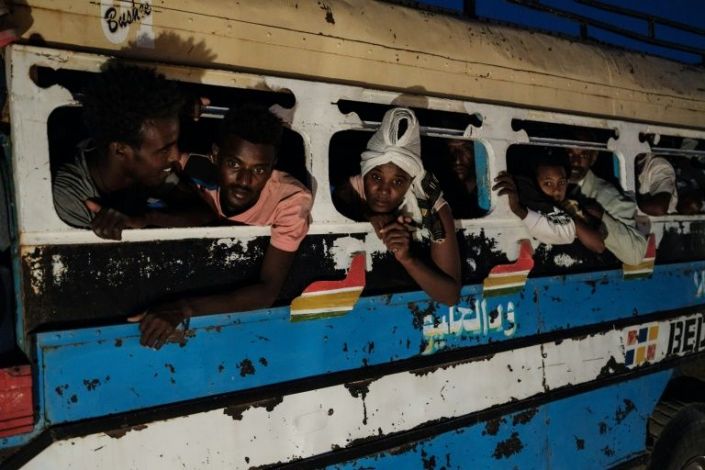 Some 50,000 people have fled Tigray to refugee camps across the border in Sudan. REUTERS

The United Nations and rights groups have expressed growing alarm over the plight of Eritrean refugees caught in the conflict in Ethiopia, warning their safety and survival are at great risk.

The UN refugee agency UNHCR said late Friday it had received “an overwhelming number of disturbing reports” of refugees being killed or kidnapped and forcibly returned to Eritrea, which borders Ethiopia’s battle-scarred Tigray region.

“If confirmed, these actions would constitute a major violation of international law,” said Filippo Grandi, the UN High Commissioner for Refugees.

Ethiopia has restricted access to Tigray, where aid groups fear a humanitarian disaster is unfolding, and the UN has not been able to reach four refugee camps housing nearly 100,000 Eritreans since fighting began between federal and regional forces on November 4.

“I am strongly urging the government of Ethiopia to continue to uphold their responsibility towards refugees under international law, and to ensure the protection and safety of all refugees in the country,” Grandi said.

The International Rescue Committee said Friday that one of its staff members was killed last month at a refugee camp for Eritreans in Tigray. The Danish Refugee Council, which also assists the Eritreans, said three of its guards were killed, but did not specify where.

Humanitarian agencies have warned of drastic supply shortages and appealed for urgent access to assist the Eritreans and an estimated 600,000 others in Tigray who were dependent on food rations before the conflict even began.

A government communications blackout combined with tight restrictions on access to Tigray has made it very difficult for aid agencies to confirm the whereabouts and safety of their staff, as well as the refugees and civilians they support.

Ethiopia said Friday it was returning “misinformed” Eritrean refugees making their way south to Addis Ababa back to the camps in Tigray to receive aid and live “lawfully and peacefully”.

“Forcibly sending Eritrean refugees back to camps in Tigray places them at unnecessary risk of harm and hunger,” Laetitia Bader, Horn of Africa director for Human Rights Watch, said Saturday.

“Eritrean refugees shouldn’t be forced to be in a conflict zone where humanitarian assistance is still restricted and international access to the refugee camps still cut off.”

The UN migration agency IOM on Friday denied that its buses were used to transport refugees “to an unknown destination” and rejected allegations that Eritreans were being held at one of its transit centres in Addis Ababa and processed for forcible return.

The International Organization for Migration said it was “extremely concerned” by reports of Eritreans being relocated against their will and “does not under any circumstances conduct the forced return of migrants and refugees”.

It said one of its three transit centres in Addis Ababa was “taken over” by Ethiopian authorities on December 3 and that IOM “had no management authority, oversight or involvement in any activities undertaken by the authorities in the centre since that time”.

Prime Minister Abiy Ahmed, the winner of last year’s Nobel Peace Prize, on Friday said his government would be in charge of handling the humanitarian response in Tigray.

An agreement last week to allow the UN and aid agencies access to Tigray foundered before a new deal was brokered Wednesday.

In a sign of the depth of tensions over where and how aid agencies should operate in Tigray, a UN team trying to visit a camp for Eritrean refugees on November 6 was shot at by Ethiopian forces and briefly detained.

Abiy declared the fighting in Tigray over on November 28. Thousands have been killed, according to the International Crisis Group think tank, and around 50,000 people have fled to refugee camps across the border in Sudan.