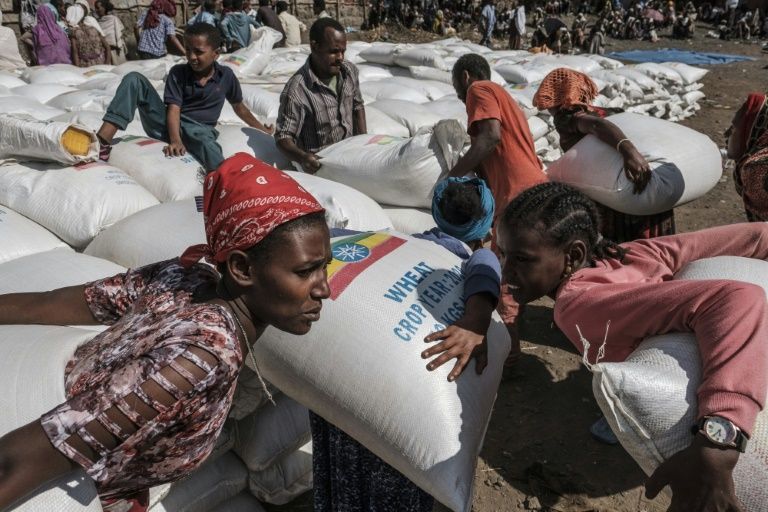 Many people in Tigray are dependent on food handouts after months of fighting. AFP

The head of the World Food Programme has said he has reached a deal with Ethiopia to expand access for aid workers and “scale up” operations in the country’s conflict-hit northern Tigray region.

David Beasley’s announcement on Twitter late Saturday comes as fears grow of a humanitarian catastrophe in Tigray, three months after fighting erupted between forces loyal to the regional ruling party and the government of Prime Minister Abiy Ahmed, the 2019 Nobel Peace Prize winner.

The government and WFP “have agreed on concrete steps to expand access for humanitarians across #Tigray, and WFP will scale up its operations,” Beasley said on Twitter following a visit to the Tigray capital Mekele.

A statement by the WFP — the 2020 Nobel peace laureate — said Ethiopian officials had agreed to speed up reviews of aid workers’ requests to move within the region.

It also said WFP had agreed to government requests to provide emergency food aid to one million people in Tigray and help with transportation to hard-to-reach rural areas.

Ethiopian peace minister Muferihat Kamil said in a separate statement the government was “moving with urgency to approve requests for international staff movements into and within Tigray.”

Top UN officials and international NGOs have repeatedly complained about access restrictions to Tigray, where fighting persists despite Abiy’s declaration of victory in late November after federal forces entered the regional capital.

The new terms fall “under the existing agreement” between the government and the UN on aid, according to the WFP statement.

That agreement restricted UN access to areas under government control.

But a senior UN official told AFP the progress was nevertheless “significant” and would facilitate access deeper into Tigray.

“It’s not good enough to just stick to the safe routes, the secure routes,” the official said.

“Our role is to be determined to get to where the last person in need is, and the presence of militias should not really hamper us.”

The WFP statement noted that “armed escorts for humanitarian cargo and personnel will be undertaken as a last resort.”

Tigray remains largely cut off to media, making it difficult to assess the situation on the ground.

The UN official noted that “insecure areas (are) were “many and significant.”

The government has played down fears of widespread starvation while touting its own efforts to meet the needs of a population of around six million.

It says it has provided emergency food aid to 1.8 million people.

During a visit to Ethiopia last week, UN refugees chief Filippo Grandi stressed the need for a more efficient system of facilitating access for aid workers and distributing aid.

“We heard from everywhere, including from the local authorities, that more is needed” beyond what the government is providing, Grandi said.

“The situation as I said is very grave, is very urgent. Without further action it will get worse.”

In his Twitter post Saturday, Beasley said “nearly 3 million people need our help NOW and we have no time to waste.”

Syrian who fled to Germany 5 years ago runs for parliament