The Times of Earth, International Edition
0
418 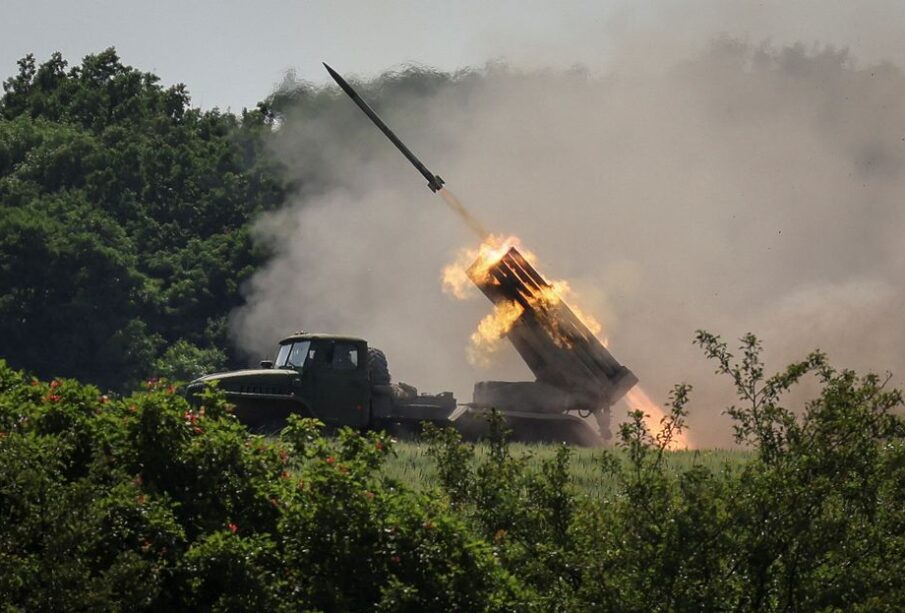 Ukrainian defenders were fighting fiercely for “every metre” of Sievierodonetsk, President Volodymyr Zelenskiy said, as Russian forces destroyed a bridge to another city across the river, leaving stranded civilians with just one way out.

Russian forces have taken most of Sievierodonetsk, having pulverized parts of the city in one of the bloodiest assaults since they invaded Ukraine on Feb. 24, and victory there could give them momentum in a wider battle for control over Ukraine’s eastern Donbas region.Advertisement · Scroll to continue

“The key tactical goal of the occupiers has not changed: they are pressing in Sievierodonetsk, severe fighting is ongoing there – literally for every metre,” Ukrainian President Volodymyr Zelenskiy said in his nightly video address on Sunday, adding that Russia’s military was trying to pour reserves into the Donbas.

Zelenskiy said the image of a 12-year-old wounded in a Russian strike was now the enduring worldwide face of Russia.

“These very facts will underscore the way in which Russia is seen by the world,” he said.

Ukrainian and Russian forces were still fighting street-by-street in Sievierodonetsk on Sunday, the governor of Luhansk province, Serhiy Gaidai, said.

Russian forces have taken most of the city but Ukrainian troops remain in control of an industrial area and the Azot chemical plant where hundreds of civilians are sheltering.

“About 500 civilians remain on the grounds of the Azot plant in Sievierodonetsk, 40 of them are children. Sometimes the military manages to evacuate someone,” Gaidai said.

But the Russians had destroyed a bridge over the Siverskyi Donets River linking Sievierodonetsk with its twin city of Lysychansk, Gaidai said.

That left just one of three bridges still standing.

“If after new shelling the bridge collapses, the city will truly be cut off. There will be no way of leaving Sievierodonetsk in a vehicle,” Gaidai said, noting the lack of a cease-fire agreement and no agreed evacuation corridors.

Gaidai said Lysychansk was also being shelled by Russian forces, and a six-year-old child had been killed there.

In Pokrovsk, southwest of Sievierodonetsk, women, children and elderly, some in wheelchairs, boarded the only train evacuating people on Saturday, at the start of a long journey from the conflict zone to safety in Lviv near the border with Poland.

“We held on until the last moment, we didn’t want to leave, but life has forced us to survive,” Lyuba, a woman from Lysychansk, told Reuters Television as she waited for the train to depart. “We are leaving, we don’t know where, to whom, but we are leaving.”

The fall of Sievierodonetsk, in the last pocket of Ukrainian land held in the strategic Luhansk region, would move Russia a big step closer to one of the stated goals of what Putin calls a “special military operation.”

Russian forces were firing mortars and artillery south and southwest of Sievierodonetsk, according to Ukraine’s general staff. But it said Ukrainian forces had repulsed Russian attempts to advance towards some communities.

After being forced to scale back its initial goals following its Feb. 24 invasion of Ukraine, Moscow has turned its attention to expanding control in the Donbas, where pro-Russian separatists have held territory since 2014.

Russian forces have engaged in the constant bombardment of cities in the south and east, leaving many in ruins and thousands of civilians dead, according to the United Nations.

Ternopil’s governor said rockets fired from the Black Sea at the city of Chortkiv had partly destroyed a military facility and injured 22 people. A local official said there were no weapons stored there.

Reuters could not independently confirm the differing accounts.

On Sunday, the Ukrainian general staff said on Facebook that General Valeriy Zaluzhny, the head of Ukraine’s armed forces, had spoken to General Mark Milley, the top U.S. military officer, and reiterated a request for more heavy artillery systems.

Moscow has criticised the United States and other nations for sending Ukraine weapons, threatening to strike new targets if the West supplied long-range missiles.

Putin says Russia’s actions aim to disarm and “denazify” Ukraine. Kyiv and its allies call it an unprovoked war of aggression to capture territory.

Also on Sunday, the leader of the Russian-backed separatist Donetsk region in the Donbas said there was no reason to pardon two British nationals sentenced to death last week after being captured along with a Moroccan man while fighting for Ukraine. Britain says they were regular soldiers exempt under the Geneva Conventions from prosecution for participation in hostilities.

Separately, the family of a former British soldier, Jordan Gatley, said on social media he was killed fighting for Ukraine in Sievierodonetsk.