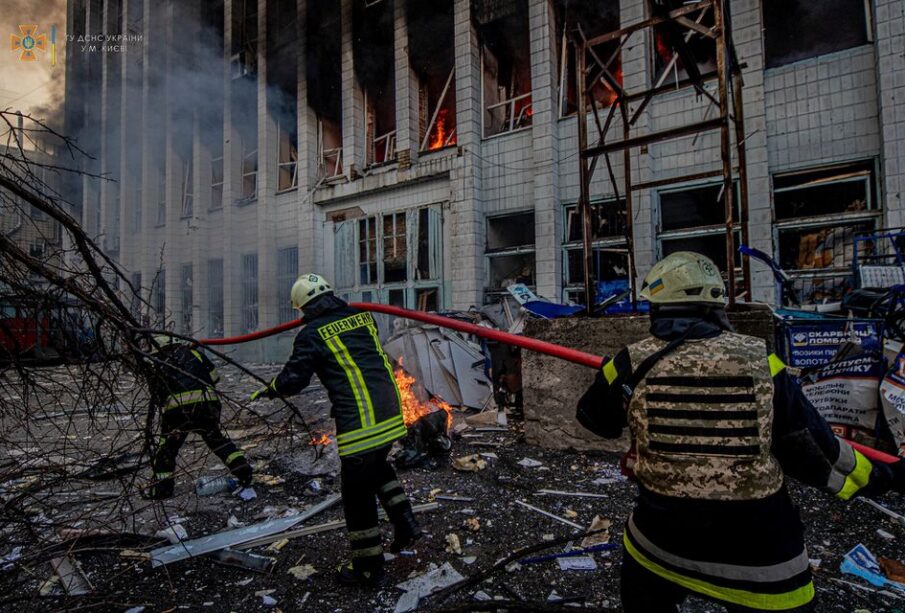 Rescuers work at a site of an industrial building damaged by an airstrike, as Russia's attack on Ukraine continues, in Kyiv, Ukraine, in this handout picture released March 22, 2022. Press service of the State Emergency Service of Ukraine/Handout via REUTERS

As Ukraine struggles to cope with the immediate casualties of Russia’s invasion, there are fears the war will also ruin the country’s progress in its fight against tuberculosis.

Ukraine has long struggled with tuberculosis, which was the world’s biggest infectious killer before the emergence of Covid-19 and spreads in a similar manner.

Despite being diagnosable and normally easily treatable, the disease kills 1.5 million people a year globally and infects more than 10 million, according to the World Health Organization.

Ukraine records around 30,000 new cases annually and has one of the world’s highest rates of drug-resistant tuberculosis, which represented 29 percent of the country’s new tuberculosis patients in 2018, according to WHO figures.

But Ukraine has worked to address the problem, in recent years becoming the first country to trial a new pill against drug-resistant tuberculosis, which occurs when the two most powerful antibiotics cannot kill the TB bacteria.

“Before the war, Ukraine had achieved a lot,” said Olya Klymenko, who recovered from tuberculosis in 2016 and went on to found an NGO, TB People Ukraine.

“But everything stopped in one day,” she said. That day was February 24, when Russian troops invaded Ukraine.

“When the war is over we will start everything not even from scratch because of the damage which occurred to our medical care, to our medical infrastructure,” she told a press conference ahead of World Tuberculosis Day on Thursday.

Askar Yedilbayev, the TB unit lead at WHO’s European office, said Ukraine was “one of the pioneering countries in response” to the disease in the region and praised its “exemplary work”.

He said that, before the war, regional warehouses had been well-stocked and patients had been provided with one-to-two months’ supply of TB medication.

But with Russia’s invasion, “Ukraine’s public health services have been derailed,” affecting tuberculosis diagnosis and treatment, he told journalists.

Michel Kazatchkine, former UN special envoy for HIV/AIDS in Eastern Europe and Central Asia, said the problem now is getting the medication to patients.

“There will be a major health crisis,” he told AFP.

“Ukraine will be left with a totally collapsed health system… diseases such as TB and drug-resistant TB will really surge afterwards,” Kazatchkine warned.

Kate White, Doctors Without Borders emergency programme manager in Geneva, said the “extreme burden” of the war has led to resources for TB and HIV patients being diverted to treat the wounded.

Yet another problem is how to continue treatment for those fleeing the violence.

“We’ve lost track of many of our patients, because they, like so many others in the country, have fled,” White told AFP.

Yedilbayev said the WHO was supporting the neighbouring countries in providing healthcare to those fleeing the violence, highlighting that “every second, one Ukrainian child becomes a refugee”.

“Covid-19 halved TB case detection in the country in 2020, and the ongoing war could bring diagnosis and treatment to its knees,” he said in a statement.

The WHO has warned that tuberculosis deaths worldwide increased in 2020 for the first time in more than a decade.

This week, the WHO called for vastly increased funding, after global spending on TB diagnostics, treatment and prevention in 2020 was less than half of the target of $13 billion annually by 2022.

Many have called for more efforts to develop a new vaccine against tuberculosis — the current BCG vaccine is a century old and “completely inefficient for adults,” said Lucica Ditiu, executive director of the Geneva-based Stop TB Foundation.

“That is nothing less than we should hope for tuberculosis.”