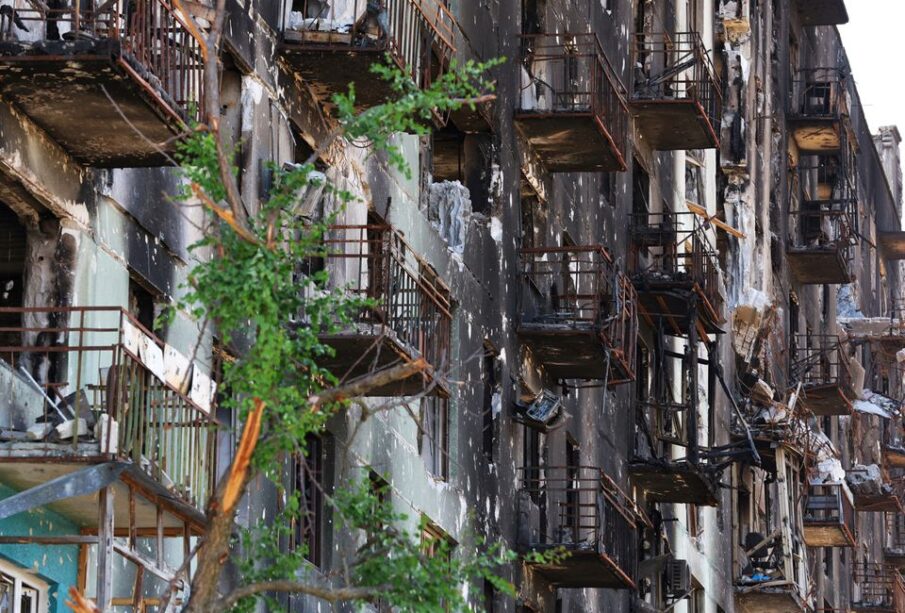 A view shows an apartment building heavily damaged during Ukraine-Russia conflict in the city of Sievierodonetsk in the Luhansk Region, Ukraine July 1, 2022. REUTERS/Alexander Ermochenko

Russian forces in Ukraine will focus on trying to seize all of the Donetsk region, having forced Ukrainian troops to withdraw from the last major city under their control in the neighbouring Luhansk region, the governor of Luhansk said on Monday.

After abandoning an assault on Kyiv, the Ukrainian capital, during the early weeks of the war, Russia concentrated its military operation on the industrial Donbas heartland that comprises the Luhansk and Donetsk regions, where Moscow-backed separatist proxies have been fighting Ukraine since 2014.

Russia said it had established full control over the Luhansk region after Ukrainian forces pulled out of the bombed-out city of Lysychansk. read more

“In terms of the military, it is bad to leave positions, but there is nothing critical (in the loss of Lysychansk). We need to win the war, not the battle for Lysychansk,” Governor Serhiy Gaidai told Reuters in an interview.

“It hurts a lot, but it’s not losing the war.”Advertisement · Scroll to continue

He said the withdrawal from Lysychansk had been “centralised”, indicating that it had been planned and orderly, but that Ukrainian forces had risked being surrounded.

“Still, for them (Russian forces) goal number 1 is the Donetsk region. Sloviansk and Bakhmut will come under attack – Bakhmut has already started being shelled very hard,” he said.

Gaidai said that he expected the city of Sloviansk and the town of Bakhmut in particular to come under attack as Russia tries to take full control of the Donbas in eastern Ukraine.

Moscow said the capture of Lysychansk less than a week after taking neighbouring Sievierdonetsk meant it had “liberated” Luhansk, a major Kremlin war goal.

Moscow said it would give the captured territory to the self-proclaimed Russian-backed Luhansk People’s Republic whose independence it recognised on the eve of the war.

President Volodymyr Zelenskiy on Sunday night vowed to regain the lost territory with the help of long-range Western weapons.

Zelenskiy said Russia was concentrating its firepower on the Donbas front, but Ukraine would hit back with long-range weapons such as the U.S.-supplied HIMARS rocket launchers.

“The fact that we protect the lives of our soldiers, our people, plays an equally important role. We will rebuild the walls, we will win back the land, and people must be protected above all else,” Zelenskiy said in his nightly video address.

In Sloviansk, west of Lysychansk in Donetsk region, Mayor Vadym Lyakh wrote on Facebook that on Sunday fierce shelling had killed at least six people, including a 10-year-old girl.

Thousands of civilians have been killed and cities levelled since Russia invaded on Feb. 24, with Kyiv accusing Moscow of deliberately targeting civilians. Moscow denies this.

Russia says what it calls a “special military operation” in Ukraine aims to protect Russian speakers from nationalists. Ukraine and its Western allies say this is a baseless pretext for flagrant aggression that aims to seize territory.

The Ukraine war has sparked a global energy and food crisis and Western-led sanctions against Moscow have triggered the worst economic crisis in Russia since the 1991 fall of the Soviet Union.

Germany has warned of gas shortages due to dwindling supplies from Russia. The head of its energy regulator said the 15 billion euros’ ($15.64 billion) of government credit to buy gas for storage may not be enough, according to an interview in the WirtschaftsWoche magazine on Monday.

While Russia would try to frame its advance in Luhansk as a significant moment in the war, it came at a high cost to Russia’s military, said Neil Melvin of the London-based think tank RUSI.

“Ukraine’s position was never that they could defend all of this. What they’ve been trying to do is to slow down the Russian assault and cause maximum damage, while they build up for a counteroffensive,” he said.

Ukraine has repeatedly appealed for an acceleration in weapons supplies from the West, saying its forces are heavily outgunned.

Russia’s defence ministry also said on Sunday it had struck the military infrastructure of Kharkiv, Ukraine’s second-largest city in the northeast, where a Reuters reporter said Ukrainian forces had been building fortifications after nightly shelling.

Outside a school in Kharkiv, some residents threw debris into a large crater created by an early morning rocket strike while others got help repairing damaged houses.

“The wife was lucky that she woke up early in the morning because the roof fell exactly where she had been sleeping,” one resident, Oleksii Mihulin, told Reuters.

About 70 km (44 miles) from Kharkiv on the Russian side of the border, Russia also reported explosions on Sunday in Belgorod, which it said killed at least three people and destroyed homes.

“The sound was so strong that I jumped up, I woke up, got very scared and started screaming,” a Belgorod resident told Reuters, adding the blasts occurred around 3 a.m. (0000 GMT).

Moscow has accused Kyiv of numerous attacks on Belgorod and other areas bordering Ukraine. Kyiv has never claimed responsibility for any of these incidents.

Ukraine said its air force had flown some 15 sorties “in virtually all directions of hostilities”, destroying equipment and two ammunition depots.

In the Russian-occupied southern Ukrainian city of Melitopol, Ukrainian forces hit a military logistics base with more than 30 strikes on Sunday, the city’s exiled mayor Ivan Fedorov said. A Russian-installed official confirmed that strikes had hit the city.