The Times of Earth, International Edition
0
256 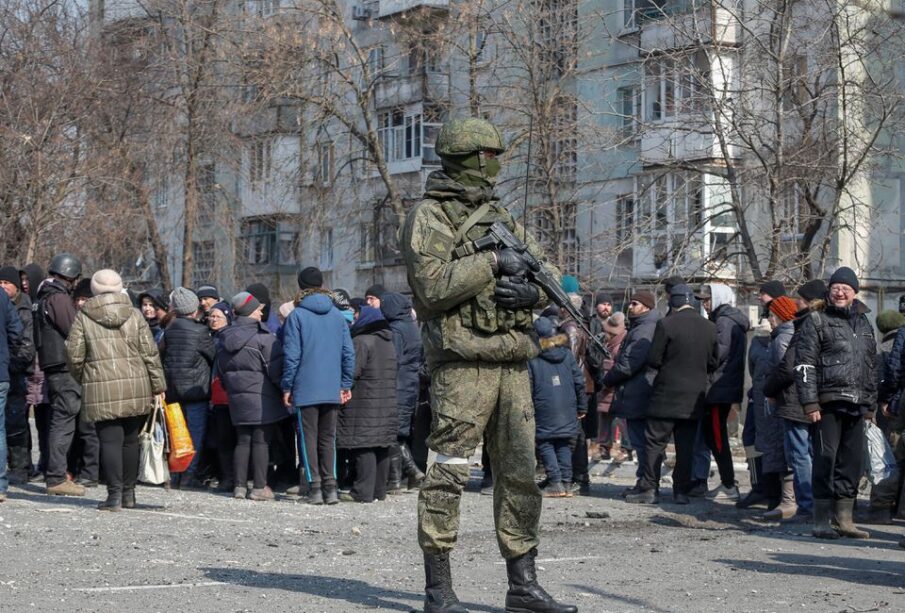 A Russian army soldier stands next to local residents who queue for humanitarian aid delivered during Ukraine-Russia conflict, in the besieged southern port of Mariupol, Ukraine March 23, 2022. REUTERS/Alexander Ermochenko

Ukraine’s leader called for global solidarity on Thursday to mark a month since Russia’s invasion began, urging people around the world to take to the streets and calling on leaders meeting in summits in Europe to bolster action against Moscow.

U.S. President Joe Biden has arrived in Brussels for meetings of the NATO alliance, G7 and European Union over the invasion that began on Feb. 24 and has led to more than 3.6 million people fleeing from the country.

“Come from your offices, your homes, your schools and universities, come in the name of peace, come with Ukrainian symbols to support Ukraine, to support freedom, to support life,” President Volodymyr Zelenskiy said in a video address.

After four weeks of conflict, Russia has failed to seize any major city and with its ground advances seemingly stalled, it has engaged in aerial bombardment, shelling and rocketing of cities, bringing devastation in many places and forcing a quarter of Ukraine’s population of 44 million from their homes.

Biden has called Putin a war criminal. The United States has said it has assessed that members of Russia’s forces have committed war crimes in Ukraine, U.S. Secretary of State Antony Blinken said.

Worst hit in the war has been the southeastern port city of Mariupol, where hundreds of thousands of people have been sheltering under constant bombardment and with food, water and heating supplies cut.

Satellite photographs from commercial firm Maxar showed massive destruction of what was once a city of 400,000 people, with apartment buildings in flames.

One city resident, Viktoria, buried her 73-year-old stepfather 12 days after he was killed when the car taking him to hospital was blown up, now that warmer weather had thawed out the frozen earth.

“It could have been me,” she sobbed, after planting a small wooden cross on the grave, one of many on a grassy verge near charred apartment blocks.

“People continue to participate in protests in the occupied cities. People under bullets tear down Russian flags and oppose the occupation,” he said.

Ahead of his meeting with Biden, NATO Secretary-General Jens Stoltenberg said the alliance would boost its forces in Eastern Europe by deploying four new battle groups in Bulgaria, Hungary, Romania, Slovakia.

Zelenskiy said he expected “serious steps” from Western allies. He repeated his call for a no-fly zone and complained that the West had not provided Ukraine with planes, modern anti-missile systems, tanks or anti-ship weapons.

“At these three summits we will see who is our friend, who is our partner and who sold us out and betrayed us,” he said in a video address released early on Thursday.

Russia calls its actions in Ukraine a “special operation” that it says is not designed to occupy territory but to destroy its southern neighbour’s military capabilities and capture what it regards as dangerous nationalists.

The West says this a baseless pretext for an unprovoked war.

Although the Kremlin says its operation is going to plan, Russian forces have taken heavy losses, stalled on most fronts and face supply problems.

Kyiv Mayor Vitali Klitschko told reporters on Wednesday that 264 civilians in the city had been killed by Russian attacks. He later said one person was killed and two wounded on Wednesday when shells hit a shopping centre parking lot.

A total of 4,554 people were evacuated from Ukrainian cities through humanitarian corridors on Wednesday, a senior official said, considerably fewer than the previous day.

Ukraine’s armed forces chief of staff early on Thursday said Russia was still trying to resume offensive operations to capture the cities of Kyiv, Chernihiv, Sumy, Kharkiv and Mariupol, and was moving in fresh troops.

The first U.S. shipment from a new, $800 million arms package for Ukraine authorised last week will start flying out in the next day or so, a senior defence official said.

Johnson said he would push for an increase in British defensive lethal aid to Ukraine.

Zelenskiy repeated he was ready to have a face-to-face meeting with Putin to end the war.

“We all need peace. We are ready to discuss the terms of the ceasefire, the terms of peace, but we are not ready for ultimatums,” he said.