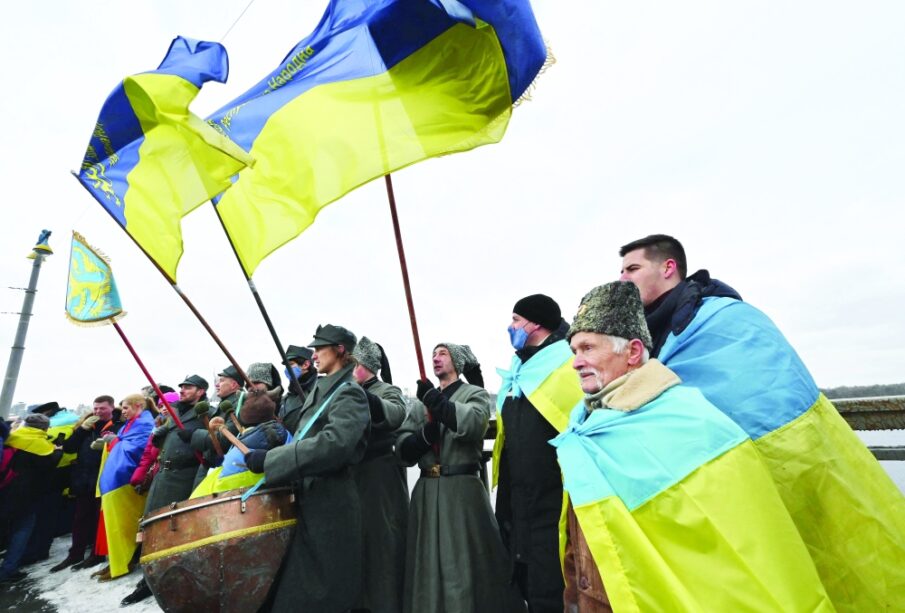 People form a symbolic human chain on a bridge across the Dnieper river in Kyiv, to mark the Day of Unity of Ukraine [File: Sergei Supinksy/AFP]

A defiant Ukrainian leader urged citizens to celebrate a “Day of Unity” on Wednesday, as Washington warned once again that Russia remains poised to launch a devastating assault.

President Volodymyr Zelensky chose the date for what he hoped would be a patriotic outpouring after US reports suggested Russian forces could attack as early as February 16.

An intense diplomatic campaign is underway to head off the crisis triggered when Russia deployed more than 100,000 troops on Ukraine’s borders, backed with fleet reinforcements and powerful artillery and missile systems.

On Tuesday, there were hopes for a breakthrough as President Vladimir Putin met Germany’s Chancellor Olaf Scholz to explore a route to a negotiated solution and Moscow said it had begun to pull back some forces.

But US President Joe Biden — who has ordered Washington’s embassy in Kyiv closed and urged Americans to leave Ukraine — demanded that Russia prove its good intentions with a verifiable withdrawal.

“Analysts indicate that they remain very much in a threatening position,” Biden said, in an address on the crisis. “The United States is prepared no matter what happens. We are ready with diplomacy,” he said.

“And we are ready to respond decisively to Russian attack on Ukraine, which is still very much a possibility,” he said, warning of “powerful sanctions”.

Earlier, in the first announced withdrawal from among the troops Russia massed on the Ukrainian border, the defence ministry in Moscow said some soldiers were returning to bases at the end of planned exercises.

Western leaders have accused Moscow of positioning the troops in advance of a possible invasion of pro-Western Ukraine, warning that any attack would be met with severe economic sanctions.

After meeting Scholz in Moscow, Putin said Russia “of course” did not want war, and was willing to look for solutions with the West.

In response, Scholz said: “That we are now hearing that some troops are being withdrawn is in any case a good sign.”

“For Europeans, it is clear that lasting security cannot be achieved against Russia but only with Russia.”

In Brussels, NATO chief Jens Stoltenberg said while there was not yet “any sign of de-escalation on the ground” there were “grounds for cautious optimism”.

The crisis — the worst between Russia and the West since the Cold War ended — reached a peak this week, with US officials warning of a full-scale invasion — perhaps on Wednesday.

Zelensky reacted with sarcasm to the warning, and declared Wednesday a “Day of Unity”.

“Serious external and internal challenges have arisen, which require responsibility, confidence and concrete actions from me and each of us,” he said.

“But our state today is stronger than ever,” he vowed.

On Tuesday, Ukraine said the websites of the country’s defence ministry and armed forces as well as two banks had been hit by a cyberattack that could have Russian origins.

“It cannot be excluded that the aggressor is resorting to dirty tricks,” Ukraine’s communications watchdog said, in reference to Russia.

In a separate move likely to anger Kyiv, Russian lawmakers on Tuesday voted to urge Putin to recognise two breakaway regions in eastern Ukraine as “sovereign and independent states”.

This would allow Russia to abandon the Minsk agreements peace plan for eastern Ukraine and potentially move in Russian troops — giving Putin a strong hand to play in any future negotiations with Kyiv.

The European Union “strongly” condemned such a move, saying it would violate the Minsk agreements that Moscow had signed up to.

Russia has repeatedly blamed the Ukraine crisis on the West, saying the United States and western Europe are ignoring Russia’s legitimate security concerns.

The Kremlin insists NATO must give assurances that Ukraine will never be admitted as a member and the alliance roll back its presence in several eastern European and ex-Soviet countries.

Russia already controls the Crimean Peninsula that it seized from Ukraine in 2014 and supports separatist forces who have taken control of parts of eastern Ukraine, in a conflict that has claimed more than 14,000 lives.