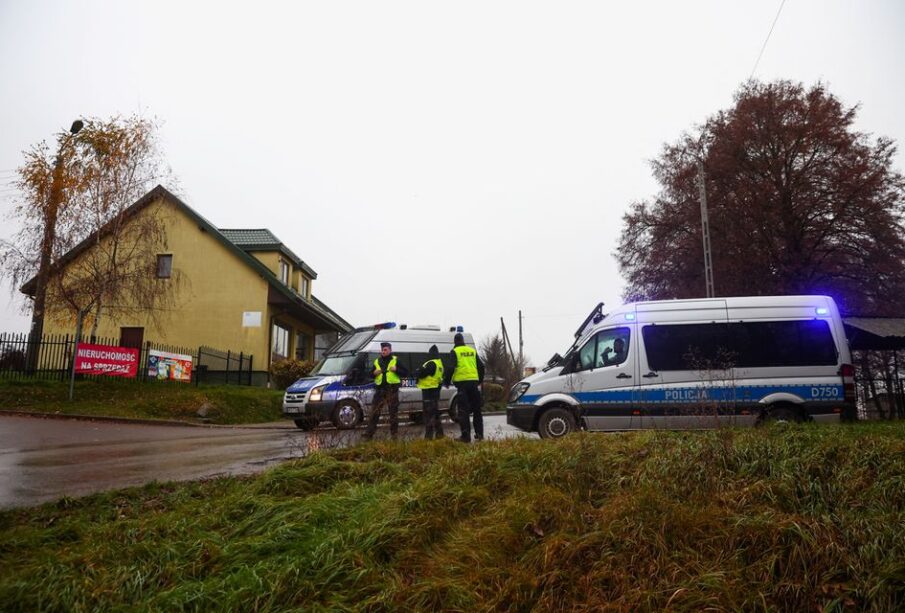 Police officers stand at a blockade after an explosion in Przewodow, a village in eastern Poland near the border with Ukraine, November 16, 2022. REUTERS/Kacper Pempel

Ukraine said it faced fierce attacks in the east from Russian forces reinforced with troops withdrawn from Kherson in the south, while NATO and Poland concluded a missile that crashed in Poland was probably a stray fired by Ukraine’s air defences.

The government in Kyiv was working to restore power nationwide on Wednesday after intense Russian strikes on civilian infrastructure earlier in the week, officials said.

NATO ambassadors held emergency talks to respond to Tuesday’s blast that killed two people at a grain facility in Poland near the Ukrainian border, the war’s first deadly extension into the territory of the Western alliance.

“From the information that we and our allies have, it was an S-300 rocket made in the Soviet Union, an old rocket and there is no evidence that it was launched by the Russian side,” Polish President Andrzej Duda said, however.

“It is highly probable that it was fired by Ukrainian anti-aircraft defence.”

The old type was being used by both Russia and Ukraine.

Nevertheless, NATO’s chief said Russia, not Ukraine, was still to blame for starting the war with its February invasion and launching scores of missiles on Tuesday that triggered Ukrainian defences.

The incident occurred during Russia’s barrage of missiles unleashed on cities across Ukraine, targeting its energy grid and worsening power blackouts for millions, in what Ukraine called the most intense bombardment of the nine-month-long war.

“This is not Ukraine’s fault. Russia bears ultimate responsibility as it continues its illegal war against Ukraine,” NATO Secretary-General Jens Stoltenberg told reporters in Brussels.

Ukrainian President Volodymyr Zelenskiy demurred, saying, “I have no doubt that it was not our missile”, Ukrainian media said on Wednesday. He said he based his conclusion on reports from Ukraine’s military which he “cannot but trust”.

Biden disputed Zelenskiy’s assertion that the missile was not Ukrainian in comments to reporters at the White House on Thursday following his return from a trip to Asia.

“That’s not the evidence,” Biden said.

Russia’s Foreign Ministry said the “mayhem” around accusations of Russian involvement in the missile were “part of a systematic anti-Russian campaign by the West”.

On Thursday, Ukraine’s military said a Russian missile had struck the southern port city of Odesa, and Ukrainian media also reported a series of blasts in the city of Dnipro.

Fighting was heavy in the eastern Donetsk region, including the towns of Pavlivka, Vuhledar, Maryianka and Bakhmut, Ukrainian presidential adviser Oleksiy Arestovych said in an online video.

Moscow’s forces retreated from the southern city of Kherson last week after a Ukrainian counteroffensive. It was the only regional capital Russia had captured since its Feb. 24 invasion, and the pullback was the third major Russian retreat of the war.

“These (Russian) troops now have, in part, redirected from Kherson region and … will be allocated to the ‘liberation’ of Donetsk and Luhansk” in the eastern industrial region known as the Donbas, Arestovych said.

Redeployed Russian forces have also gone on the attack in the southern Zaporizhzhia region and may be planning to launch another offensive in Kharkiv in the north, where they were pushed back by Ukraine earlier in the conflict, Arestovych said.

Vladimir Rogod, a Russian-installed official in the Russian-controlled part of Zaporizhzhia, said a Ukrainian missile struck a village there, killing two people and wounding nine.

The top U.S. general, Army General Mark Milley, chairman of the Joint Chiefs of Staff, played down chances of any outright military victory for Ukraine in the near term, cautioning that Russia still had significant combat power in Ukraine, despite setbacks.

As the fighting intensified elsewhere, investigators in the recently liberated Kherson region uncovered 63 bodies bearing signs of torture after Russian forces left the area, Ukraine’s interior minister was quoted as saying on Thursday.

Interfax Ukraine news agency quoted the minister, Denys Monastyrsky, as telling national television, “The search has only just started, so many more dungeons and burial places will be uncovered.”

“We are talking about millions of customers. We are doing everything we can to bring back power. Both generation and supply,” Zelenskiy said.

Elsewhere, a United Nations source said on Wednesday the world body has reasons to be “cautiously optimistic” on the renewal of a Black Sea grain export agreement set to roll over on Saturday, unless there are objections.

The U.N.-backed agreement on July 22 allowed grain shipments to resume from certain Ukrainian ports on the Black Sea, leading to some 10 million tonnes in shipments and helping to rein in world food prices.