The Times of Earth, International Edition
0
590 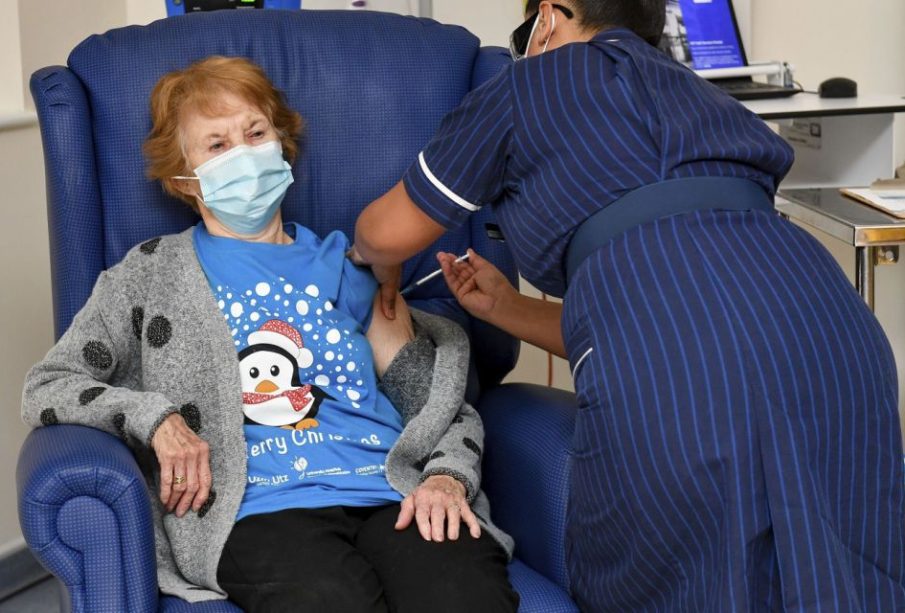 90 year old Margaret Keenan, the first patient in the UK to receive the Pfizer-BioNTech COVID-19 vaccine, administered by nurse May Parsons at University Hospital, Coventry, England, Tuesday Dec. 8, 2020. The United Kingdom, one of the countries hardest hit by the coronavirus, is beginning its vaccination campaign, a key step toward eventually ending the pandemic. (Jacob King/ AP)

Margaret Keenan, a 90-year-old grandmother, on Tuesday became the first person in the world to receive the Pfizer COVID-19 vaccine shot outside of a trial as Britain began vaccinating its population.

An early riser, Keenan received the vaccine at her local hospital in Coventry, central England, on Tuesday morning at 0631 GMT, a week before she turns 91.- ADVERTISEMENT -https://s.yimg.com/rq/darla/4-6-0/html/r-sf-flx.html

Britain began rolling out the COVID-19 vaccine developed by Pfizer and BioNTech on Tuesday, the first Western country to start vaccinating its general population in what was hailed as a decisive watershed in defeating the coronavirus.

“I feel so privileged to be the first person vaccinated against Covid-19,” said Keenan, as she received the jab from a nurse originally from the Philippines in front of a photographer and TV crew.

“It’s the best early birthday present I could wish for because it means I can finally look forward to spending time with my family and friends in the New Year after being on my own for most of the year.”

Keenan, known as Maggie to her friends, is a former jewellery shop assistant who only retired four years ago. She has a daughter, a son and four grandchildren.

Video footage shows her wearing a medical mask along with a blue t-shirt and cardigan while she receives the shot from nurse May Parsons.

Parsons, who has worked in Britain’s National Health Service for 24 years, said the last few months had been tough on everyone but it felt like there was now light at the end of the tunnel.

Britain is the worst-hit European country from COVID-19, with over 61,000 deaths, but Prime Minister Boris Johnson hopes to turn the tide against the disease by rolling out the Pfizer/BioNTech vaccine before the United States or European Union.

The mass inoculation will fuel hope that the world may be turning a corner in the fight against a pandemic that has crushed economies and killed more than 1.5 million, although ultra-cold storage and tricky logistics will limit its use for now.

The BBC also carried an interview with another elderly lady who will receive the vaccine today, very upset after she lost her husband from COVID-19 earlier in the year.

Britain has ordered 40 million doses of the Pfizer/BioNTech shot. As each person requires two doses, that is enough to vaccinate 20 million people in the country of 67 million.

About 800,000 doses are expected to be available within the first week, with care home residents and carers, the over 80s and some health service workers the top priority to get them.