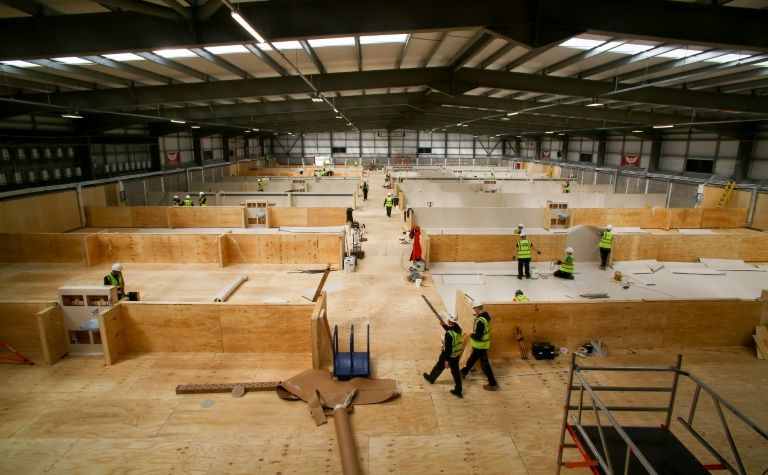 Britain has been building emergency medical facilities to take the strain of an expected surge in coronavirus cases, such as this one in Llanelli, Wales (AFP Photo/GEOFF CADDICK)

Britain said Wednesday it would soon begin testing 25,000 people daily for COVID-19 as criticism of the government grew over low numbers of testing compared to other countries.

Housing Minister Robert Jenrick told Sky TV that it was targeting 25,000 daily tests by “mid-April”, after the latest figures revealed the UK death toll was almost 1,800,.

The victims included a 13-year-old boy, thought to be the country’s youngest victim.

Ministers have been put on the back foot as criticism over the lack of testing grows.

There has been growing condemnation of a lack of tests for frontline health staff as well as the wider public. Even media normally loyal to the ruling Conservative Party have written about a mass testing “shambles”.

Some 25,150 people have now tested positive for the virus in Britain, including Prime Minister Boris Johnson and Health Minister Matt Hancock.

Jenrick conceded the UK had to increase test numbers “significantly” but blamed kit shortages due to the global pandemic.

Another senior minister, Michael Gove, has also blamed the lack of “chemical reagents” needed for tests kits — a claim contradicted by those representing the UK chemical industry.

Meanwhile, the family of the 13-year-old boy, Ismail Mohamed Abdulwahab, from south London, said in a statement that they were “beyond devastated” at his death.

The boy, who died on Monday at King’s College Hospital in London, had no underlying illnesses.

The latest UK health ministry figures show that a total of 1,789 people have died, although data published by the Office for National Statistics (ONS) for England and Wales suggested that the true toll could be 24 percent higher.

Government figures only cover those who have been taken to hospital and tested for the virus whereas the ONS data is for deaths in the community where COVID-19 is suspected.

Jenrick added that the country should be braced for further bad news.

“It’s likely the numbers will get worse in the coming days before they get better,” he said.