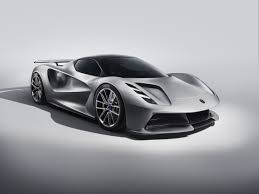 Britain\’s auto industry, seeking to swerve Brexit obstacles, is accelerating toward electrification as consumers shun high-polluting diesels, driven by rapid advances in technology and greener government policy.
Four famous car brands born in Britain but now foreign-owned — German-held Bentley and Mini, Indian-backed Jaguar Land Rover, and Chinese-controlled Lotus — have each this month outlined plans for purely electric models to sit alongside their petrol vehicles.
All-electric cars, which need to be charged from the mains, and hybrids, which combine electrics with petrol or gasoline engines, are gaining in popularity as more consumers turn away from the pollution-spewing internal combustion engine.
“You need to be into electrification,” Lotus Cars chief executive Phil Popham told AFP in an interview after unveiling the firm\’s first all-electric sports car Evija — pronounced “E-vi-ya” — which the company will start making next year.
Lotus, 51-percent owned by Chinese auto giant Geely, plans an initial sale of only 130 of the supercars, which will each cost about £1.7 million ($2.1 million, 1.8 million euros).
– \’Absolutely the future\’ –
“Electrification is absolutely part of our future,” said Popham. “In the not-too-distant future, all of our cars will offer electrification.”
Lotus\’ plant in Hethel, eastern England, will see a £100-million investment over the next five years as it ramps up its sports car range with financial firepower and technical knowhow from Geely, which bought its majority stake two years ago.
Etika Automotive of Malaysia holds the remaining 49 percent of Lotus.
Popham said the removal of large components, like the internal combustion engine and gearbox, will see the so-called hypercar Evija have an electric motor on each wheel.
It will reach 0-60 miles per hour in three seconds and have a top speed of 200 mph. Fully-charged however, it will be able to drive a distance of only 250 miles (400 kilometres).
In the more affordable premium market, Jaguar Land Rover, owned by India\’s Tata Motors, is planning a range of electric vehicles at its central England factory — starting with the next-generation Jaguar XJ luxury saloon model.
“The future of mobility is electric,” said JLR chief executive Ralf Speth, whose company introduced its first electric vehicle I-PACE last year.
Elsewhere, BMW-division Mini recently launched plans for its first all-electric Mini Cooper at its factory in Cowley, southern England.
“We\’ll be able to really react to demand from customers as we go forward because Mini electric (cars) go down exactly the same production line as the traditional combustion engine product,” David George, director of Mini UK, told AFP on a visit to the facility.
In Europe as a whole, the number of electric car models, including hybrids, is set to triple by 2021, according to Brussels-based environmental lobby group Transport & Environment.
A total 214 models will be available for purchase by 2021, up from 60 in late 2018, T&E said.
– \’Environmentally conscious\’ –
“There is a growing trend for consumers to be looking for more environmentally conscious and efficient products and technologies,” Bentley chief executive Adrian Hallmark told AFP.
He was speaking in July after the Volkswagen-owned luxury carmaker detailed its futuristic all-electric self-driving concept, the EXP 100 GT, at its facility in central England.
When Nissan unveiled its first mass-market electric car hatchback Leaf nine years ago, the Japanese carmaker described it as a “game-changer” for Britain\’s biggest car plant in Sunderland, northeastern England.
Since then, more and more carmakers have sped up plans for more environmentally-friendly products — and also electrify their current offerings.
However, Cardiff University economics professor and auto specialist Peter Wells lamented the fact that many automakers were merely replicating electric versions of pre-existing models — rather than optimising how they deploy cutting-edge technology.
“The mindset is that the industry should simply replicate the existing petrol/diesel product ranges, only in hybrid and electric,” said Wells.
“In my view this strategy can still result in less than optimised vehicle designs,” he noted.
SOURCE: AFP
Previous Article

Iraqi forces clear farmland near Baghdad of IS militants