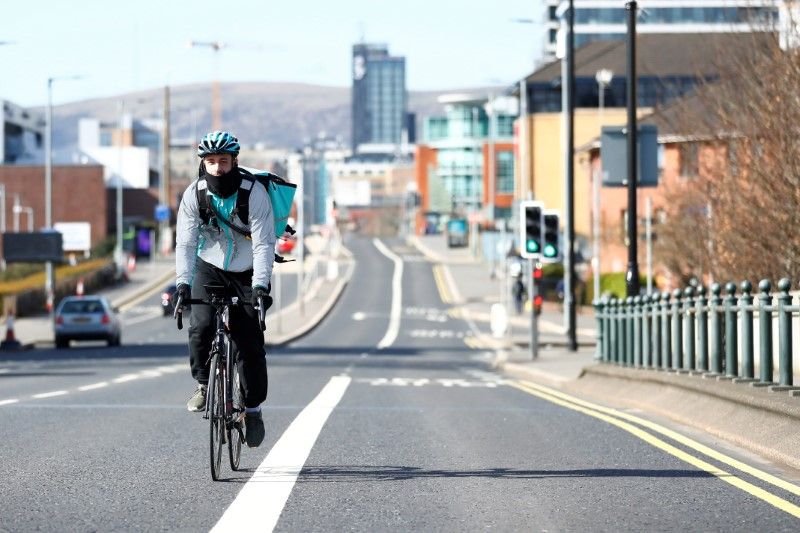 A deliveroo driver is seen in Belfast just after rush hour as the spread of the coronavirus disease (COVID-19) continues, Belfast, Northern Ireland, March 19, 2020. REUTERS/Jason Cairnduff

All cafes, pubs, restaurants, gyms and other similar venues across the UK have been ordered to close from Friday evening for the foreseeable future, as Boris Johnson said it was vital to take more urgent steps to reduce the rapid spread of the Covid-19 virus.

At a press conference at Downing Street, the prime minister said that, while he thanked people for responding to official encouragement earlier this week to stay away from such places, the time had come to take “the next steps on scientific advice”.

“We need down to push down further on that curve of transmission between us,” Johnson said.

With the agreement of the three devolved governments, he said, “we are telling – telling – cafes, pubs, bars and restaurants to close tonight, as soon as they reasonably can, and not open tomorrow”. They would be allowed to sell takeaway food and drink, he said.

The same instruction was being given to nightclubs, theatres, cinemas, gyms and leisure centres, Johnson added. The new social distancing measures would be reviewed every month to see if any could be relaxed, he said.

Johnson urged people not to decide to go out one final time on Friday: “Please don’t. You may think you are invincible, but there is no guarantee you will get mild symptoms, and you can still be a carrier of the disease and pass it on to others.”

There had been expectations that such a closure could only happen in London, which has notably greater levels of coronavirus infection than other parts of the country.

The capital has the highest rate of infection and deaths so far in the UK – about a third of the total.

A further 40 people have died across the UK after testing positive for the coronavirus, bringing the total number of confirmed deaths in the country to 167, the UK’s National Health Service has said.

The patients who died were aged between 50 and 99 and had underlying health conditions.

Overall there have been 177 deaths across the UK. 167 of these have been in England, with six in Scotland, three in Wales and one in Northern Ireland.

The first coronavirus-related death in the UK was reported 15 days ago, on 5 March.

Around 80% of cases of Covid-19 will be a mild to moderate illness, close to 14% have severe disease and around 6% are critical.

Generally, you need to be 15 minutes or more in the vicinity of an infected person, within 1-2 metres, to be considered at-risk or a close contact.

The British government has said engineering companies have come up with an emergency ventilator prototype to treat coronavirus patients that could be approved next week.

However one industry source told Reuters full production was several weeks away.

Britain has a shortage of ventilators which can save the lives of those who develop complications after contracting the virus. The UK’s existing stock of around 5,000-8,000 ventilators is inadequate.

Given such an acute shortage in a country with a population of 67 million, the government scrambled to ask top engineering companies to retool their production to make ventilators.

“More than half a dozen companies have already made one in prototype, to check with us that we are happy with the quality,” health minister Matt Hancock said.

Britain faces a “massive shortage” of ventilators that will be needed to treat critically ill patients suffering from coronavirus, after it failed to invest enough in intensive care equipment, a leading ventilator manufacturer said.

Estimates of the potential death toll in the United Kingdom range from a around 20,000 to over 250,000 or even more.

Britain has asked 65,000 former nurses and doctors to return to work and will deploy final-year medical students and student nurses to fight the coronavirus health crisis, the health ministry has said.

Britain’s health service is freeing up 30,000 beds by postponing non-urgent operations and providing care in the community for those who are fit to be discharged, and finding up to 10,000 in independent and community hospitals, the health service said.