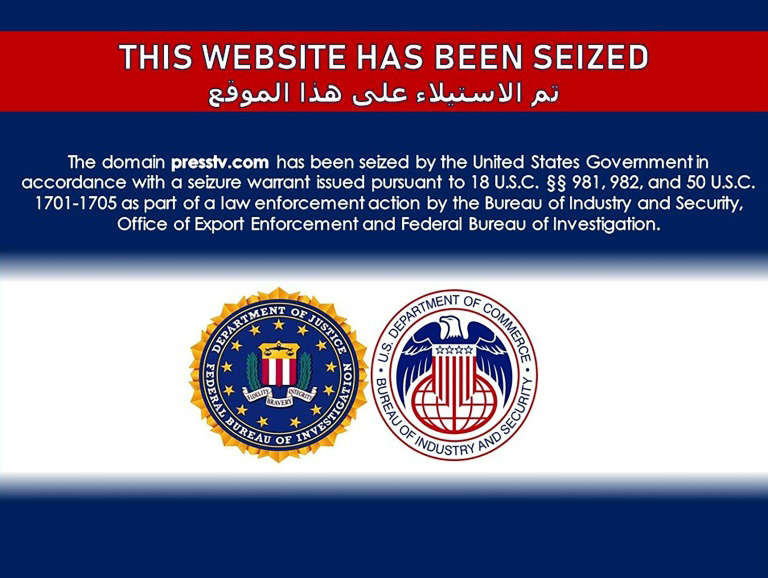 The U.S. Justice Department said on Tuesday it seized 36 Iranian-linked websites, many of them associated with either disinformation activities or violent organizations, taking them offline for violating U.S. sanctions.

Several of the sites were back online within hours with new domain addresses.

“Today, pursuant to court orders, the United States seized 33 websites used by the Iranian Islamic Radio and Television Union (IRTVU) and three websites operated by Kata’ib Hizballah (KH), in violation of U.S. sanctions,” the department said in a statement.

Also spelled Kataib Hezbollah, KH is one of the main Iran-aligned Iraqi militia groups and has been designated a Foreign Terrorist Organization by the United States.

The Justice Department said the 33 domains used by IRTVU are owned by a United States company and that IRTVU did not obtain a license from Treasury’s Office of Foreign Assets Control prior to utilizing the domain names.

KH also did not obtain a license.

Notices appeared earlier on Tuesday on a number of Iran-affiliated websites saying they had been seized by the United States government as part of law enforcement action.

The notices appeared days after a prominent hardliner and fierce critic of the West, Ebrahim Raisi, was elected as Iran’s new president and after envoys for Iran and six world powers, including Washington, adjourned high-stakes talks on reviving their tattered 2015 nuclear accord and returned to capitals for consultations.

The website of the Arabic-language Masirah TV, which is run by the Houthis, read:

“The domain almasirah.net has been seized by the United States Government in accordance with a seizure warrant … as part of a law enforcement action by the Bureau of Industry and Security, Office of Export Enforcement and Federal Bureau of Investigation.”

The site quickly opened up a new, working website at www.almasirah.com.

Notices also appeared on the website of Lualua TV, an Arabic-language Bahraini independent channel that broadcasts from Britain.

U.S. prosecutors in October seized a network of web domains they said were used in a campaign by Iran’s Revolutionary Guard Corps (IRGC) to spread political disinformation around the world.

The Justice Department said then it had taken control of 92 domains used by the IRGC to pose as independent media outlets targeting audiences in the United States, Europe, Middle East and Southeast Asia.

The semi-official Iranian news agency YJC agency said on Tuesday the U.S. move “demonstrates that calls for freedom of speech are lies.”