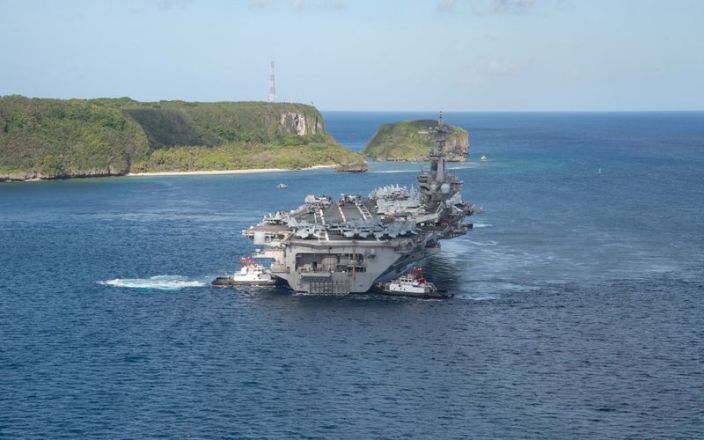 A U.S. aircraft carrier group led by the USS Theodore Roosevelt has entered the South China Sea to promote “freedom of the seas”, the U.S. military said on Sunday, at a time when tensions between China and Taiwan have raised concern in Washington.

U.S. Indo-Pacific Command said in a statement the strike group entered the South China Sea on Saturday, the same day Taiwan reported a large incursion of Chinese bombers and fighter jets into its air defence identification zone in the vicinity of the Pratas Islands.

The U.S. military said the carrier strike group was in the South China Sea, a large part of which is claimed by China, to conduct routine operations “to ensure freedom of the seas, build partnerships that foster maritime security”.

“After sailing through these waters throughout my 30-year career, it’s great to be in the South China Sea again, conducting routine operations, promoting freedom of the seas, and reassuring allies and partners,” Rear Adm. Doug Verissimo, commander of the strike group, was quoted as saying.

“With two-thirds of the world’s trade travelling through this very important region, it is vital that we maintain our presence and continue to promote the rules-based order which has allowed us all to prosper,” Verissimo said in the statement.

The announcement comes just days after Joe Biden was sworn in as U.S. president.

Biden’s nominee for secretary of state, Antony Blinken, told his Senate confirmation hearing on Tuesday there was “no doubt” China posed the most significant challenge to the United States of any nation.

China has repeatedly complained about U.S. Navy ships getting close to Chinese-occupied islands in the South China Sea, where Vietnam, Malaysia, the Philippines, Brunei and Taiwan all have competing claims.

The United States’ commitment to Taiwan is “rock-solid”, the State Department said late Saturday, as it warned that China’s “attempts to intimidate” the island are a threat to regional peace.

The comments are the first from Washington on relations with Taiwan since President Joe Biden’s inauguration last week, and came on the same day Taipei reported multiple Chinese jets and bombers had flown into its air defense zone.

State Department spokesman Ned Price said it “notes with concern the pattern of ongoing PRC attempts to intimidate its neighbors, including Taiwan” and “urges Beijing to cease its military, diplomatic, and economic pressure against Taiwan.”

The statement added that Washington would continue to work on “deepening” ties with democratic Taiwan.

Taiwan split from China at the end of a civil war in 1949. Its 23 million people live under the constant threat of invasion by the mainland, whose leaders view the island as their territory and have vowed to one day take it.

Beijing baulks at any official contacts with Taiwan and tries to keep the island diplomatically isolated.

President Donald Trump embraced warmer ties with the island as he feuded with China on issues like trade and national security.

Beijing has called for a reset in US-China ties under Biden and on Thursday warned the US to “cautiously and appropriately handle Taiwan issues to prevent harm to US-China relations”.

But the new US president is expected to remain tough on the superpower rival despite a softening of diplomatic tone.

Protecting Taiwan has become a rare bipartisan issue, especially as Chinese President Xi Jinping has ramped up threats towards the island.

Last year, Chinese airplanes made a record 380 incursions into Taiwan’s air defense identification zone and there is little sign of a shift since Biden came to power.

The New York Times said China also sent 15 planes — including 12 fighters — into the zone on Sunday.

In a tweet on Sunday, Taipei’s Ministry of Foreign Affairs thanked the US for its statement of support “in the face of Beijing’s ongoing coercion.”

There was no immediate response from Beijing on Sunday.

In a subtle but symbolic gesture, Taiwan’s de facto ambassador to the US was formally invited to Biden’s inauguration in what Taipei said was a precedent-setting first since Washington switched recognition to Beijing in 1979.

The US statement on Saturday noted that Washington would “continue to assist Taiwan in maintaining a sufficient self-defense capability”.