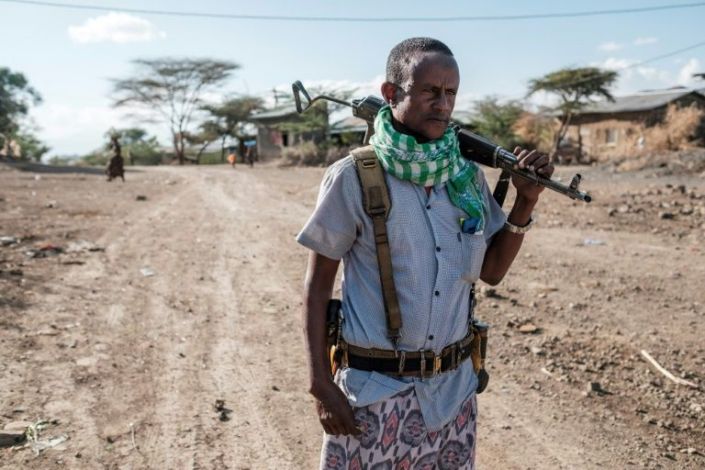 A militiaman in Ethiopia's Tigray region in December 2020. Not enough aid is being allowed in, the UN has warned. AFP

A conflict in Ethiopia’s Tigray region could trigger broader destablization in the country, U.N. aid chief Mark Lowcock told the Security Council on Wednesday as he warned that a dire humanitarian situation in the north was set to worsen.

Hundreds of thousands of people in Tigray have not received help and the United Nations has been unable to completely assess the situation because it does not have full and unimpeded access, according to Lowcock’s notes for the closed virtual briefing of the 15-member Security Council.

He said there were reports of increasing insecurity elsewhere, which could be due to a vacuum created by the redeployment of Ethiopian troops to Tigray, and that the United Nations was concerned about the potential for broader national and regional destablization.

The TPLF withdrew from the regional capital, Mekelle, and major cities, but low-level fighting has continued.

In the region of more than five million people, thousands of people are believed to have died and 950,000 have fled their homes since fighting began.

U.N. Secretary-General Antonio Guterres was “seriously concerned” over the situation in Tigray, a U.N. spokesman said late on Tuesday.

Lowcock said Abiy’s government controls between 60% and 80% of the territory in Tigray, but does not have full command of the ethnic Amhara and Eritrean forces also operating in the region.

Dozens of witnesses say Eritrean troops are in Tigray to support Ethiopian forces, though both countries deny that.

The United Nations has received reports that police are operating at a fraction of their previous capacity and Lowcock said he could confidently say that if protection and aid were not quickly increased then the humanitarian situation would deteriorate.

He said there were troubling accusations of sexual and gender-based violence.

Several senior U.N. officials recently visited Ethiopia to push for greater access to Tigray. Lowcock said he was hopeful there would be concrete progress in coming days to allow aid to be scaled up.

US ends support for Saudi-led war in Yemen