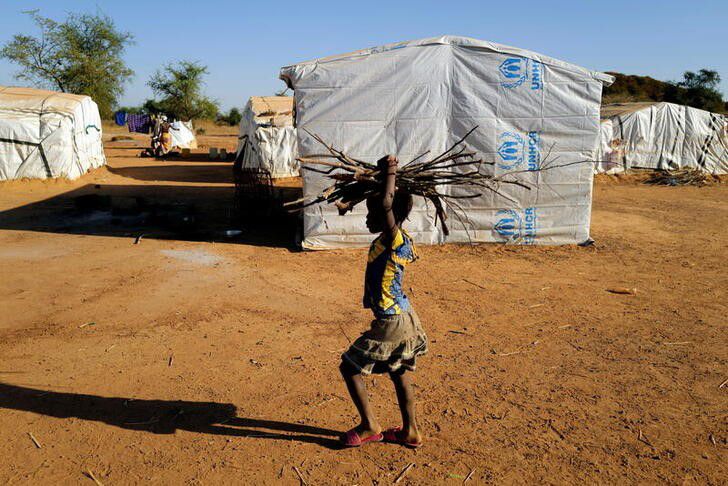 A girl who fled with her parents from attacks of armed militants in the Sahel region carries wood for a cooking fire at a camp for internally displaced people (IDPs) in Kaya, Burkina Faso November 23, 2020. REUTERS/Zohra Bensemra/File Photo

Food rations for refugees and displaced people are being cut by up to half in parts of the Sahel due to a massive funding shortfall with millions set to go hungry as prices rise and climate shocks hit yields, U.N. agencies said on Friday.

The U.N. humanitarian office (OCHA) estimates that some 18 million people face severe food insecurity in the next three months across the arid belt that stretching across Africa beneath the Sahara. Its $3.8 billion appeal for the region is less than 12% funded, OCHA spokesperson Jens Laerke said.

In Burkina Faso, rations are currently at 75% in areas that are hard-to-reach and the most food insecure, and 50% at other sites, the World Food Programme said.

Rations have already been cut by half for displaced people and refugees in Chad, it said. The WFP will be forced to reduce them further from July if more funding is not received.

In Mauritania, the food component of the food-cash ration is being cut by 50% at Mbera camp, it said.

The conflict between major grains producers Russia and Ukraine is one factor that has driven up food prices in Africa. That crisis has also diverted aid from other areas.

“Why is it as bad now? We have conflict in the West African region, you have COVID still raging, you climate-induced shocks, you have rising costs which are all colliding to put basic needs out of reach for millions of people,” Tomson Phiri from the WFP told the briefing.