Two killed in bombing at pro-Kashmir rally in Pakistan 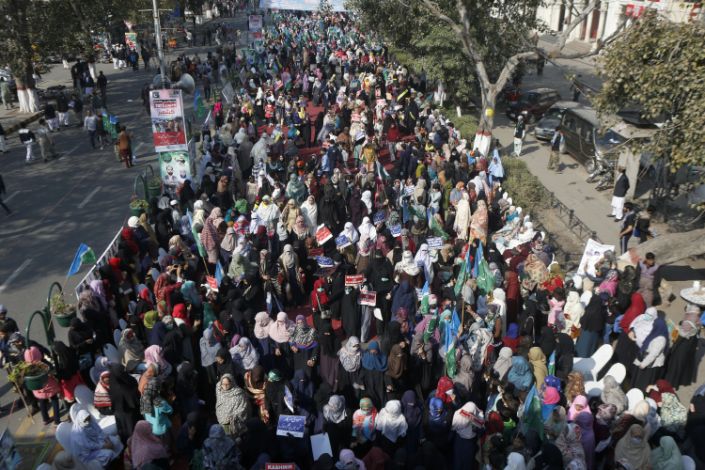 Supporters of the Pakistani religious group Jamaat-e-Islami participate in a rally to mark Kashmir Solidarity Day in Lahore, Pakistan, Friday, Feb. 5, 2021. Pakistan's political and military leadership on Friday marked the annual Day of Solidarity with Kashmir, vowing to continue political support for those living in the Indian-controlled part of Kashmir and for a solution to the disputed region's status in accordance with U.N. resolutions. (AP Photo/K.M. Chaudary)

At least two people were killed and two wounded when a bomb exploded during a pro-Kashmir rally in Pakistan’s southwest on Friday.

The demonstration was held to mark Kashmir Solidarity Day, observed across Pakistan every February 5 in support of those living in Muslim-majority and Indian-administered Kashmir.

Friday’s bombing took place in Quetta, the capital of Balochistan province, near the border with Afghanistan.

“The timed-device was concealed in a truck, which exploded when participants of the rally were marching on a road,” Ghulam Qadir, a senior police official, told AFP.

Organisers of the rally were reportedly using the truck as a stage to deliver speeches.

Qadir said four people wounded in the attack were taken to hospital, where two succumbed to their injuries.

In a separate incident at a pro-Kashmir rally in the city of Sibbi on Friday, 16 people including three police officers were wounded when unidentified attackers hurled a grenade at the crowd, officials said.

No group has claimed responsibility for either of the attacks.

Kashmir has been split since 1947 between India and Pakistan, both of which claim it in full, and has seen intermittent fighting between the two nuclear-armed powers over the decades.

Kashmir Solidarity Day is a public holiday in Pakistan, and typically sees nationwide rallies in support of the region’s right to self-determination.