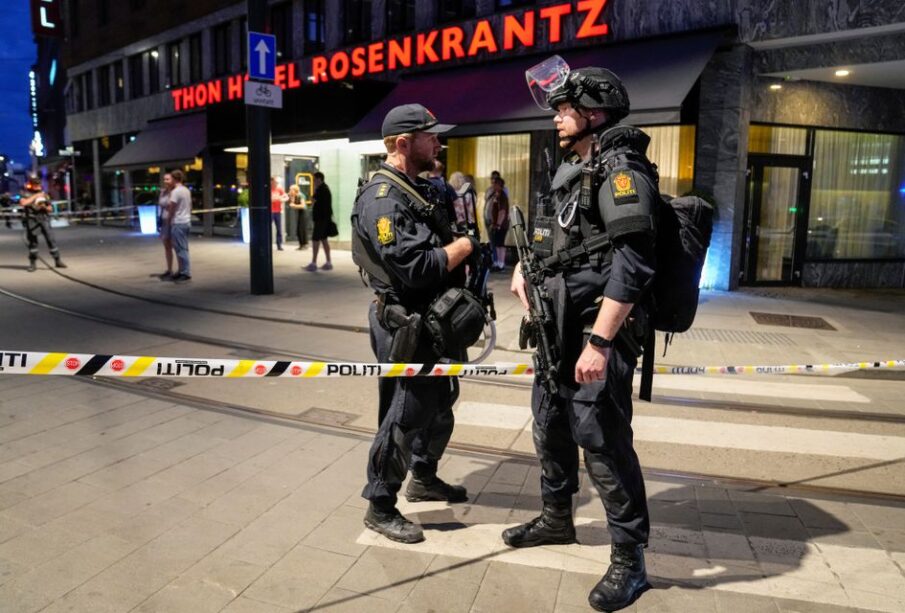 Security forces stand at the site where several people were injured during a shooting outside the London pub in central Oslo, Norway June 25, 2022. Javad Parsa/NTB/via REUTERS

Two people were killed and 14 wounded on Saturday in a shooting at a nightclub and in nearby streets in Norway’s capital Oslo, police said.

A suspect believed to be the sole perpetrator was apprehended, police told reporters. The suspect was known to authorities, public broadcaster NRK reported, adding he was not cooperating with police.

The crime scene extended from the London Pub via a neighbouring club and onwards to a nearby street where the suspect was apprehended a few minutes after the shooting began in the early hours of Saturday, police spokesman Tore Barstad told newspaper Aftenposten.

The London Pub is a popular gay bar and nightclub in the centre of Oslo.

“I saw a man arrive with a bag, he picked up a gun and started to shoot,” journalist Olav Roenneberg of public broadcaster NRK reported.

It was not immediately clear what the motive for the attack was.

Oslo is due to hold its annual Pride parade later on Saturday, just months after Norway marked 50 years since the abolition of a law that criminalised gay sex.

The attack was a “terrible and deeply shocking attack on innocent people,” Prime Minister Jonas Gahr Stoere said in a statement to Norwegian news agency NTB.

“We don’t know yet know what is behind this terrible act, but to the queer people who are afraid and in mourning, I want to say that we stand together with you.”

Photographs published by newspaper VG, broadcaster NRK and others showed a large gathering of emergency responders outside the London Pub, including police and ambulance workers.

Helicopters hovered above central Oslo while ambulance and police car sirens were heard across the city.

Oslo’s university hospital said it had gone on red alert following the shooting.

Ukrainian forces will have to leave Sievierodonetsk -governor