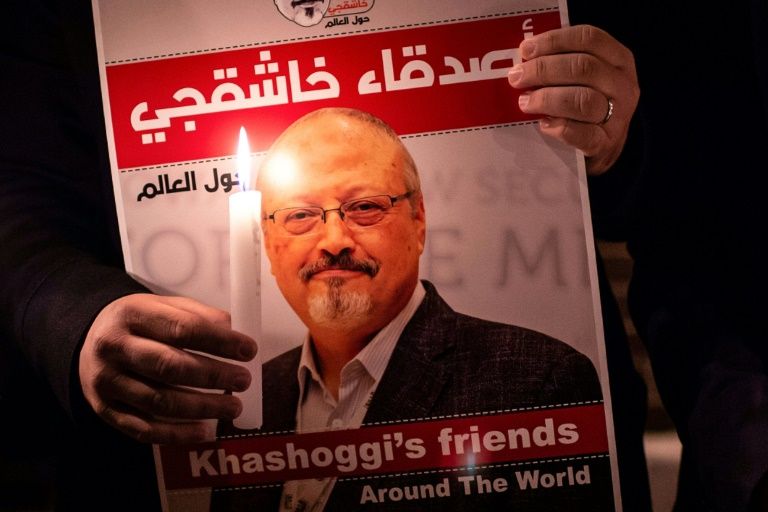 Saudi journalist Jamal Khashoggi -- a royal family insider turned critic -- was killed and dismembered at the kingdom's consulate in Istanbul on October 2, 2018, in a case that triggered international outrage (AFP Photo/Yasin AKGUL)

A Turkish court on Friday opened the trial in absentia of two former aides of Saudi Crown Prince Mohammed bin Salman and 18 other Saudi nationals over the 2018 killing of Washington Post columnist Jamal Khashoggi.

Turkish prosecutors have indicted the 20 Saudi nationals over Khashoggi’s grisly killing at the Saudi Consulate in Istanbul that cast a cloud of suspicion over Prince Mohammed. They are seeking life prison terms for the defendants, who have all left Turkey.

Saudi Arabia rejected Turkish demands for the suspects’ extradition and put some of them on trial in Riyadh. The proceedings were widely criticized as a “whitewash” and Khashoggi’s family later announced that they had forgiven his killers.

The trial in Turkey will be closely watched for possible new information or evidence into the killing, including the whereabouts of Khashoggi’s remains.

The Turkish prosecutors have charged the prince’s former advisers, Saud al-Qahtani and Ahmed al-Asiri, with “instigating a premeditated murder with the intent of (causing) torment through fiendish instinct.”

Prosecutors are also seeking life prison sentences for 18 other Saudi nationals charged with carrying out “a premeditated murder with the intent of (causing) torment through fiendish instincts.”

Khashoggi, who was a resident of the U.S., had walked into his country’s consulate on Oct. 2, 2018, for an appointment to pick up documents that would allow him to marry. He never walked out.

A team of 15 Saudi agents had flown to Turkey to meet Khashoggi inside the consulate. They included a forensic doctor, intelligence and security officers and individuals who worked for the crown prince’s office.

Turkish officials allege Khashoggi was killed and then dismembered with a bone saw. Turkey, a rival of Saudi Arabia, apparently had the Saudi Consulate bugged and has shared audio of the killing with the CIA, among others.

Prior to his killing, Khashoggi had written critically of Saudi Arabia’s crown prince in columns for the Washington Post.

Saudi Arabia had initially offered shifting accounts about Khashoggi’s disappearance. As international pressure mounted because of the Turkish leaks, the kingdom eventually settled on the explanation that he was killed by rogue officials in a brawl.

Turkish prosecutors say the suspects “acted in consensus from the beginning in line with the decision of taking the victim back to Saudi Arabia and of killing him if he did not agree.”

Riyadh had insisted that the kingdom’s courts are the correct place for the suspects to be tried and put 11 people on trial over the killing. In December, five people were sentenced to death while three others were found guilty of covering up the crime and were sentenced to a combined 24 years in prison.

During the Muslim holy month of Ramadan in May, Khashoggi’s son announced that the family pardoned the killers, giving legal reprieve to the five government agents who were sentenced to death.