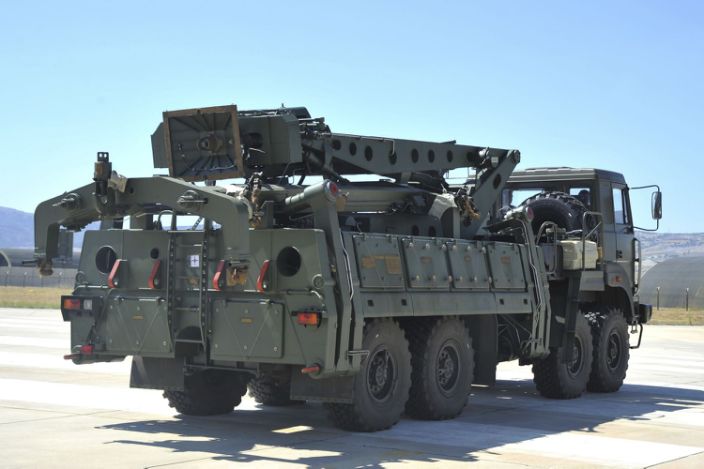 Turkey on Monday condemned U.S. sanctions over its purchase of Russian S-400 missile defences as a “grave mistake” and threatened to retaliate over a move it said would harm ties between the NATO allies.

“We call on the United States to revise the unjust sanctions (and) to turn back from this grave mistake as soon as possible,” it said. “Turkey is ready to tackle the issue through dialogue and diplomacy in a manner worthy of the spirit of alliance.”

The sanctions “will inevitably negatively impact our relations, and (Turkey) will retaliate in a manner and time it sees appropriate,” the ministry added.

The United States says Turkey’s determination to use the S-400s, acquired from Moscow in 2019, left it with no choice given F-35 jets and other shared defences would be vulnerable to NATO foe Russia. Turkey has said the ground-to-air missiles would not be plugged into NATO systems and pose no threat.

The strained ties between Washington and Ankara have weighed on Turkey’s lira, which hit a series of record lows this year, and on its economy, which is stretched by the coronavirus pandemic and depleted reserves.

Just ahead of the U.S. announcement, Turkish President Tayyip Erdogan said the sanctions rhetoric was upsetting.

“From our NATO ally the United States, we expect support in our battle against terrorist organisations … not sanctions,” he said after a cabinet meeting in Ankara.

The U.S. sanctions also would block specific U.S. export licenses for any goods or technology transferred to the Defence Industries Directorate (SSB), which is Turkey’s top defence procurement and development body.

Ozgur Unluhisarcikli, director of the German Marshall Fund research group in Ankara, said it would pinch Turkey’s defence industry for a time. “But (for) the overall economy, I think the impact will be much smaller than could have been or was expected,” he said.

SSB Chairman Ismail Demir, one of the four sanctioned individuals, said on TRT television the “threatening language” will only redouble Turkey’s determination to have a fully independent defence industry.