The Times of Earth, International Edition
0
768 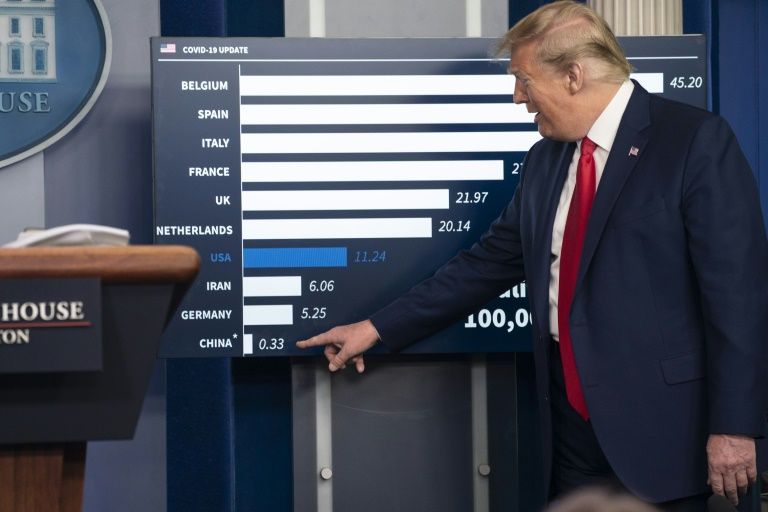 US President Donald Trump points to China's mortality rate from coronavirus at a White House briefing, a number he described as "impossible" (AFP Photo/Sarah Silbiger)

US President Donald Trump warned on Saturday that China could face consequences if it was “knowingly responsible” for the coronavirus pandemic.

“It could have been stopped in China before it started and it wasn’t,” Trump told reporters at a White House briefing. “And now the whole world is suffering because of it.”

Trump was asked whether China should suffer consequences over the pandemic which began in the Chinese city of Wuhan in December and has left more than 157,000 people dead around the world.

“If they were knowingly responsible, certainly,” he said. “If it was a mistake, a mistake is a mistake.

“But if they were knowingly responsible, yeah, then there should be consequences,” Trump said.

“Was it a mistake that got out of control or was it done deliberately?” he asked. “That’s a big difference between those two.

“In either event they should have let us go in,” he said. “We asked to go in early. And they didn’t want us in. I think they knew it was something bad and they were embarrassed.”

The Trump administration has said it doesn’t rule out that the novel coronavirus was spread — accidentally — from a laboratory researching bats in Wuhan.

Chinese Foreign Ministry spokesman Zhao Lijian — who previously alleged that the US military may have brought the virus into China — has rejected US media reports on the subject and said there is “no scientific basis.”

“The number’s impossible,” he said. “It’s an impossible number to hit.”