The Times of Earth, International Edition
0
682 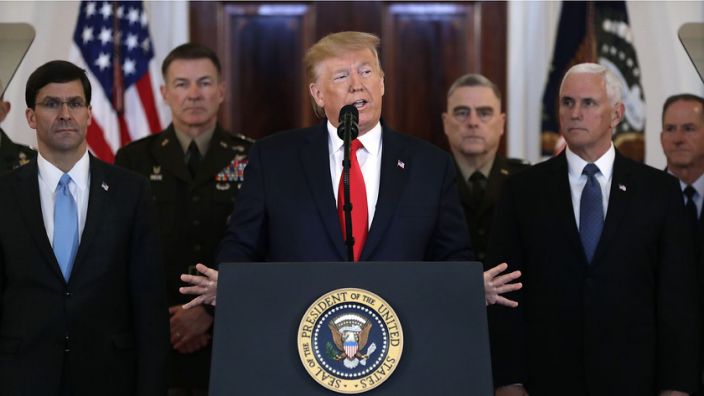 US President Donald Trump has addressed the Iranian missile attacks on US forces in Iraq, where he reiterated that “no Americans were killed”.

U.S. President Donald Trump said on Wednesday no Americans were harmed in the Iranian missile attacks on military bases housing U.S. troops in Iraq, and urged world powers to forge a new nuclear deal with Tehran.

“No Americans were harmed in last night’s attack by the Iranian regime. We suffered no casualties,” Trump said in a White House address that signaled a desire to de-escalate the crisis with Iran.

“The fact that we have this great military and equipment, however, does not mean we have to use it. We do not want to use it. American strength, both military and economic, is the best deterrent,” he said. Trump stopped short of making any direct threat of military action against Iran. He urged world powers including Russia and China to abandon the 2015 nuclear accord with Iran and work toward a new agreement.

“We must all work together toward making a deal with Iran that makes the world a safer and more peaceful place,” he said.

Iranian forces fired missiles at military bases housing U.S. troops in Iraq on Wednesday in retaliation for the U.S. killing of an Iranian general, raising the stakes in its conflict with Washington amid concern of a wider war in the Middle East.