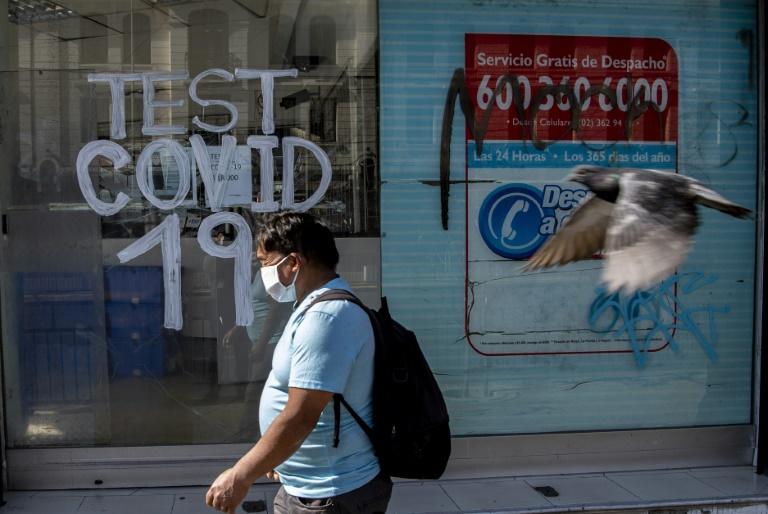 A man walks past a pharmacy where COVID-19 tests are conducted in Santiago, Chile (AFP Photo/MARTIN BERNETTI)

Chile’s government ordered a mandatory total quarantine for the capital Santiago on Wednesday after a 60 percent spike in coronavirus infections in the previous 24 hours.

“The most severe measure I must announce is a total quarantine in Greater Santiago,” home to 80 percent of the country’s 34,000-plus infections, Health Minister Jaime Manalich said.

Manalich said the lockdown — including in several areas where earlier confinement measures had been lifted — was necessary after 2,260 new infections and 12 deaths in the last 24 hours.

Chile had until now opted for a selective quarantine strategy in dealing with the pandemic, limiting the measures to areas with high incidence of infection.

However, the government had been increasingly concerned about rising infection numbers across the city of seven million people in the past 10 days, and last week ordered strict new confinement measures in three densely populated areas.

Healthworkers reported growing rates of infection in early May, just after President Sebastian Pinera’s conservative government celebrated the fact that infections were peaking, citing a daily rate of around 500 new cases.

Within a few days, however, officials began to speak of “The Battle of Santiago.”

“The month of May is being hard on our country and we have to take appropriate actions at the right time to stop this disease,” Manalich said.

He added that the health system was able to cope, as fatalities remain low.

Health authorities said the South American country had 553 ventilators available as of Wednesday, and more units would be added in the coming days.

The minister also announced that the government was imposing a mandatory quarantine on people over 75 years of age in the northern cities of Iquique and Alto Hospicio.

Tensions mount as Scotland goes its own way on virus lockdown