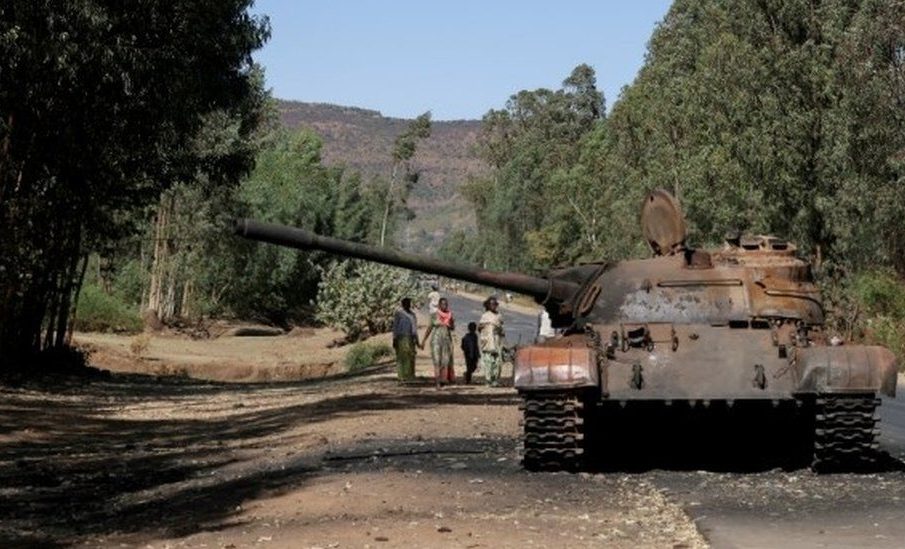 Fighting between government troops and Tigrayan rebels have intensified in recent weeks. REUTERS

Rebel fighters in Ethiopia’s war-hit Tigray seized control of more territory on Tuesday, one day after retaking the local capital and vowing to drive all “enemies” out of the region.

The rebels’ gains and militant rhetoric cast doubt on whether a unilateral ceasefire declared Monday by the federal government would actually lead to a pause in the nearly eight-month-old conflict that has killed thousands of people and pushed hundreds of thousands to the brink of famine.

He said the move came in response to TPLF attacks on federal army camps, and promised that victory would be swift.

But on Monday his military suffered a dramatic reversal when rebels known as the Tigray Defence Forces (TDF) reclaimed the regional capital Mekele, only about a week after launching a major counter-offensive.

They followed that on Tuesday by entering the town of Shire, about 140 kilometres (90 miles) northwest of Mekele, according to a UN security source and a security assessment document seen by AFP.

The news has prompted street celebrations in multiple locations as federal soldiers, their Eritrean allies and members of an Abiy-appointed interim regional government have fled their posts.

A statement overnight from Tigray’s pre-war government hailed the TDF advances and called for its fighters to press further.

“The government of Tigray calls upon our people and army of Tigray to intensify their struggle until our enemies completely leave Tigray,” it said.

The International Crisis Group, a conflict prevention organisation, said Tuesday the TDF was “now in control of most of the region, including major towns”.

Communications were cut throughout Tigray on Tuesday, making it difficult to verify reports of troop movements.

But by Tuesday afternoon UN officials had confirmed TDF forces were in Shire.

“The population has taken to the streets in droves. Huge crowds line the main routes and movement is somewhat difficult,” a UN security assessment document said.

Getachew Reda, a spokesman for Tigrayan forces, told AFP Tuesday evening they were prepared to chase their opponents well beyond Tigray — even as far as the capitals of Ethiopia and neighbouring Eritrea, which has allied itself with Abiy.

“Nothing is off the table.”

In addition to Eritrea, federal forces have received support from Ethiopia’s Amhara region, which borders Tigray to the south.

Amhara forces have been accused of annexing portions of Tigray in what US Secretary of State Antony Blinken has described as “ethnic cleansing”.

In a statement Tuesday, the Amhara branch of Abiy’s ruling party said it would reject any attempt by Tigrayan forces to take back that land.

“We want to reiterate that if there is a desire to wrest these areas by force unlawfully, there will be no Amhara that won’t pay for his freedom,” it said.

The TDF’s current offensive was timed to coincide with Ethiopia’s highly anticipated national elections, which took place June 21 in much of the country — though not in Tigray — and were expected to deliver Abiy a comfortable victory.

The brutal war in Tigray has been marked by massacres, widespread sexual violence and other abuses.

In announcing its ceasefire Monday, the federal government said it would last until the end of the current “farming season” and was intended to facilitate agricultural production and aid distribution while allowing rebel fighters “to return to a peaceful road”.

African Union Commission head Moussa Faki Mahamat issued a statement Tuesday welcoming what he described as a “humanitarian ceasefire,” as did the governments of China, France and the United Arab Emirates.

Getachew, however, dismissed the ceasefire declaration as “a joke.”

Britain, the United States and Ireland have called for an emergency UN Security Council public meeting, which could happen on Friday, diplomats said.

The Security Council has failed to hold a public session on Tigray since the war erupted, with many African countries, China, Russia and other nations deeming the crisis an internal Ethiopian affair.

Tigray rebels vow to drive out ‘enemies’ despite ‘ceasefire’