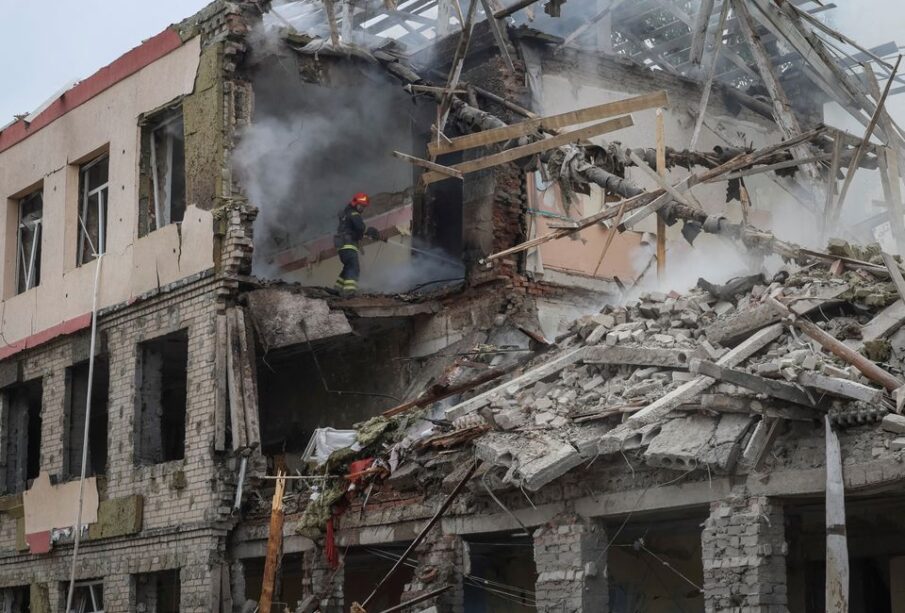 A rescuer works at a school building damaged by a Russian military strike, amid Russia's invasion on Ukraine, in Kramatorsk, in Donetsk region, Ukraine July 21, 2022. REUTERS/Gleb Garanich/File Photo

Speaking on television, Governor Andriy Raikovych said two security guards at an electricity substation had been killed. He also said that one Ukrainian soldier had been killed and nine more wounded.

Raikovych said the strikes had disrupted the electricity grid and that one district of the regional capital Kropyvnytskyi had been left without power as a result.

Zelenskiy says no ceasefire without recovering land lost to Russia

Ukrainian President Volodymyr Zelenskiy said a ceasefire with Russia without reclaiming lost territories would only prolong the war, according to an interview with the Wall Street Journal on Friday.

He warned that a ceasefire that allows Russia to keep Ukrainian territories seized since the invasion in February would only encourage an even wider conflict, giving Moscow an opportunity to replenish and rearm for the next round.

Zelenskiy also spoke about U.S.-supplied high mobility artillery rocket systems (HIMARS), saying, “the Western supplies of Himars, while making a material difference, are much lower than what Ukraine needs to turn the tide.”

He said, “Society believes that all the territories must be liberated first, and then we can negotiate about what to do and how we could live in the centuries ahead”.

“A more pressing need is air-defense systems that could prevent Russia from raining long-range missiles on otherwise peaceful cities hundreds of miles from the front lines,” Zelenskiy added.

Referring to the deal signed with Russia to reopen grain exports Zelenskiy said, “Diplomatic concessions to Moscow might stabilize the markets somewhat, but would only provide a temporary respite and boomerang in the future.”

Russia and Ukraine signed a landmark deal on Friday to reopen Ukrainian Black Sea ports for grain exports, raising hopes that an international food crisis aggravated by the Russian invasion can be eased.