The Times of Earth, International Edition
0
1164 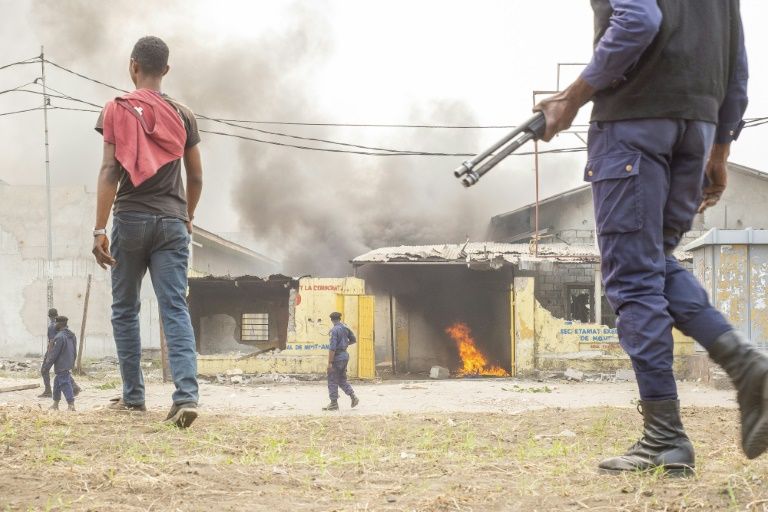 Police wielding tear gas dispersed thousands of protestors in the DR Congo capital Kinshasa on Monday, four days after five people were killed in banned demonstrations over the choice of a new election chief.

The police broke up the gathering using tear gas, while men in civilian clothes threw stones at the demonstrators.

Some protestors were badly hurt falling from vehicles escorting Bemba.

Security forces using tear gas also dispersed other protests in the eastern city of Bukavu and in the central city of Kananga, AFP journalists there said.

The marches were triggered by a decision by the National Assembly — dominated by supporters of former president Joseph Kabila — to appoint Ronsard Malonda as chairman of the independent national electoral commission, CENI.

Pro-democracy campaigners say Malonda, currently CENI’s secretary-general, has played a historic role in rigging elections in favour of Kabila, who was succeeded in January last year by Felix Tshisekedi, son of a historic opposition leader.

Monday’s rally was called by the main alliance of opposition parties, Lamuka, which says that its candidate, Martin Fayulu, was denied victory in the December 2018 elections because of CENI’s fraud.

Bemba, whose car was escorted to his home by the police, said he had been told by the security forces “that there were no deaths, no wounded, no pillaging”.

Protests last Thursday, staged by Tshisekedi’s own party, the Union for Democracy and Progress (UDPS), sparked a crackdown that led to the death of two protestors in Kinshasa and three in Lubumbashi in the southeast of the country, according to interior ministry figures.

Twenty police were injured in Kinshasa, two of them seriously, the ministry said.

The protests are unfolding while Tshisekedi has yet to announce whether he will approve Malonda as CENI chief.

Tshisekedi told a cabinet meeting that he could understand anger over “irregularities” in the choice of the new CENI boss, but that he also condemned violence.

The authorities have banned rallies under emergency measures to combat coronavirus.

A third round of marches has been scheduled for July 19 by Catholic and citizens’ groups.

Meanwhile, a police officer was sentenced by a military court on Monday to life imprisonment for the killing of a pro-democracy activist during a May demonstration in the eastern city of Beni.

The DR Congo government has been ordered to pay the equivalent of $100,000 (88,000 euros) in damages for its role in the shooting death of Marcus-Freddy Kambale, according to pro-democracy Lucha movement and a civil party lawyer in the case.