The Times of Earth, International Edition
0
677 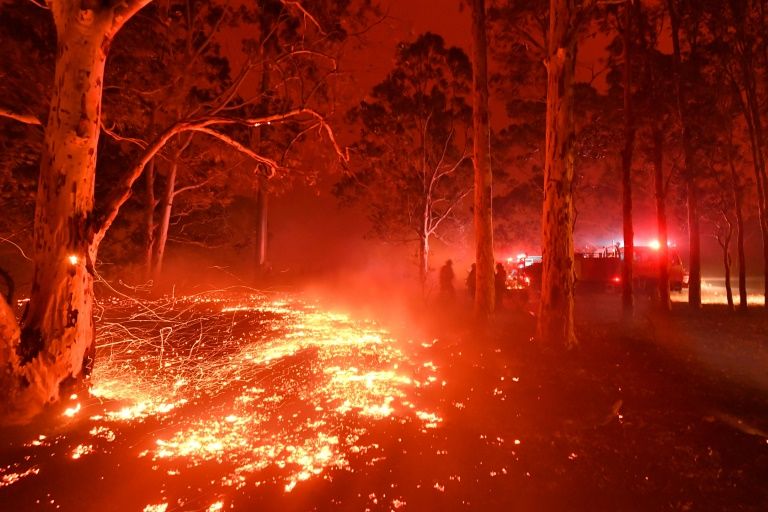 Thousands of holidaymakers and locals were forced to flee to beaches in fire-ravaged southeast Australia Tuesday, as deadly blazes ripped through popular tourist areas and cut off several towns.

In fire-encircled seaside communities along a 200-kilometre (135-mile) strip of coast, terrified people — wrapped in blankets and make-shift facemasks — sought refuge near the water.

Some with boats even took to the sea in near-darkness, hoping to find safety, as one of the worst days yet in Australia’s months-long bushfire crisis prompted the military to be deployed.

In a brutal 24 hours, three people have died, five more are unaccounted for, and scores of properties were feared destroyed as flames reached well-populated towns like Batemans Bay, normally bursting with visitors during Australia’s summer holidays.

“We’ve got literally hundreds, thousands of people up and down the coast, taking refuge on the beaches” and in surf clubs, said Shane Fitzsimmons, commissioner of the New South Wales Rural Fire Service.

Still some four thousand people were trapped on the foreshore in the town of Mallacoota, where towering columns of smoke turned day to night and nearby fires caused waves of “ember attacks”.

Victoria authorities said later Tuesday that Mallacoota and a nearby town remained cut off, but the life-threatening fire front had finally passed.

“I understand there was a public cheer down at the jetty when that was announced,” said Steve Warrington of the Country Fire Authority, echoing a palpable sense of relief at the slightest good news.

In some places Tuesday’s blazes were so intense, the smoke so thick and the fire-provoked dry lightning storms so severe that aerial reconnaissance and waterbombing had to be halted.

Australia’s minister of defence said Linda Reynolds said three helicopters, one aircraft and two naval ships would be sent to the region.

The military is expected to conduct damage assessments and potentially provide those displaced with food, shelter and electricity and even evacuation.

More back-up has also been requested from firefighters in Canada and the United States.

Authorities said it likely that many of those trapped on the beaches would be forced to spend the night there.

The picture was barely better in inland rural communities, where countless more people were displaced and forced into make-shift camps.

Hundreds of “anxious and stressed and traumatised” people were gathered at Bega’s showgrounds, said 44-year-old Beck Walker, who had been holidaying with her husband and two young sons when they heard sirens warning them to evacuate at around 4.30 am.

“We had to pack up and leave straight away,” she told AFP. “It was pretty scary because the sky was red… By 7.30 am we thought it was still night because the sky had turned black.”

Australia’s unprecedented bushfires have been burning for months, but the latest in a series of heatwaves and high winds have wrought new devastation.

The crisis has also hit cities like Sydney and Melbourne, home to several million people.

On Monday, around 100,000 people had been urged to flee five Melbourne suburbs as the blaze bore down on homes just 16 kilometres (10 miles) from the centre of Australia’s second-biggest city.

Sydney was again shrouded in toxic bushfire haze Tuesday. City officials said Sydney’s New Year’s Eve fireworks would go ahead, but a similar event has been cancelled in Canberra and several regional towns.

A Rural Fire Service spokesman said a 28-year-old volunteer firefighter — whose wife was due to give birth in May — died Monday in New South Wales when a “fire tornado” picked up an eight-tonne truck “and flipped it over”.

A 63-year-old man and his 29-year-old son died in the devastated town of Cobargo in the latest spasm of destruction Tuesday.

Ten others, including two volunteer firefighters, have been killed so far this fire season.

The blazes have destroyed more than 1,000 homes and scorched well over three million hectares (7.4 million acres) — an area bigger than Belgium.

The crisis has focused attention on climate change — which scientists say is creating a longer and more intense bushfire season — and sparked street protests.

While conservative Prime Minister Scott Morrison belatedly acknowledged a link between the fires and climate change, he has continued his staunch support of Australia’s lucrative coal mining industry or pay for exhausted volunteer firefighters.

Jenifer James, 64, said she had spent hours Tuesday working to protect her Bermagui home in semi-darkness and surrounded by a “ring of fire”.

She said the political response to the disaster had been “very poor” and more needed to be done to support volunteer firefighters. “They are so bloody tired,” she told AFP.

Trump deploys more troops to Mideast after US embassy attack