Thousands cross borders out of Ukraine, men told to stay and fight

The Times of Earth, International Edition
0
258 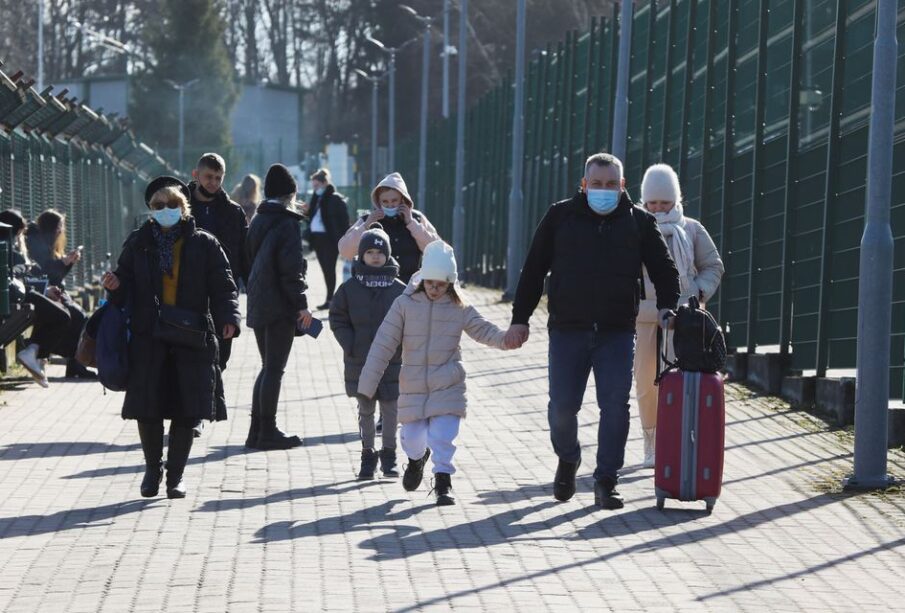 People and children walk at the border crossing between Poland and Ukraine, after Russian President Vladimir Putin authorized a military operation in eastern Ukraine, in Medyka, Poland, February 24, 2022. REUTERS/Kacper Pempel

Tens of thousands of Ukrainians, mostly women and children, crossed into Poland, Romania, Hungary and Slovakia on Friday as Russian missiles pounded the capital Kyiv and men of fighting age were told to remain.

Many waited for hours in freezing conditions to leave Ukraine after Russian President Vladimir Putin launched an invasion. read more

Iryna, 36, and her mother set out from Kyiv on Thursday with her two girls aged 2 and 4, before crossing into Ubla in Slovakia.

“We left my husband there, so he is still there supporting our government,” she said on Friday at a hotel in the border town of Snina. “We pray for Ukraine and I hope everything will be fine,” she said.

In Poland, which has the region’s largest Ukrainian community of about 1 million people, authorities said wait times to cross the border ranged from 6-12 hours in some places.

At Medyka in the south of Poland, some 85 km (52 miles) from Lviv in western Ukraine, roads were packed with cars, police directing traffic, and people hugging loved ones after they arrived on the Polish side. An internet map site showed a third of the way congested with heavy traffic.

Ukrainian rules restrict men aged 18-60, who could be conscripted, from crossing the border.

Marta Buach, 30, from Lviv, said her husband was not allowed to cross with her. “In Lviv it is ok but in other cities it is really a catastrophe. Kyiv was shelled, other small cities were shelled, we were hearing bombing everywhere.

“I think it is only a matter of time for it to be as dangerous as other cities,” she said.

United Nations aid agencies say the war could drive up to five million people to flee abroad. They said fuel, cash and medical supplies were running low in parts of Ukraine.

Border authorities said 29,000 people had entered Poland from Ukraine on Thursday, and about half had indicated they were fleeing the war. In Romania, more than 10,000 Ukrainians had arrived on Thursday, and nearly 3,000 in Slovakia.

Poland’s deputy interior minister Paweł Szefernaker said Ukrainian bus drivers were unable to drive across the border as conscription-age men were being held back in Ukraine.

Michał Mielniczuk, a spokesman for the southern Polish region of Podkarpackie said temporary accommodation was being offered to people arriving.

“The vast majority continue on to other places throughout Poland after receiving a warm meal,” he told the PAP news agency.

On the border with northern Romania, women were crying as they bid goodbye to male loved ones, setting off to cross into Sighetu Marmatiei, a remote town on the banks of the Tisa river, a Reuters witness said.

Long queues had formed as cars waited to board a ferry over the Danube river into Isaccea, a town between Moldova and the Black Sea, local media in Romania showed.

Slovak authorities urged people to donate blood and set up hospitals with 5,380 beds assigned for the army or NATO use.

Across central Europe, on NATO’s eastern flank, volunteers were putting up messages on social media to organise housing and transport for people arriving from the borders.

Activists were setting up food and hot drink distribution points and vets were offering to take care of pets.

Authorities in Poland and Romania lifted pandemic quarantine rules for those arriving from outside the European Union and, from Friday, Ukrainians could get COVID-19 vaccinations in Poland.

Hungary said it will open a humanitarian corridor for citizens from third-party countries like Iran or India fleeing Ukraine, letting them in without visas and taking them to the nearest airport at Debrecen. At its border crossings, Ukrainian cars lined up for three to five km.

Bulgaria started issuing passports to its citizens in Kyiv who needed travel documents and had sent four buses to the Ukrainian capital to evacuate people.