Tensions rise between Somalia and UAE over delayed elections

The Times of Earth, International Edition
0
509 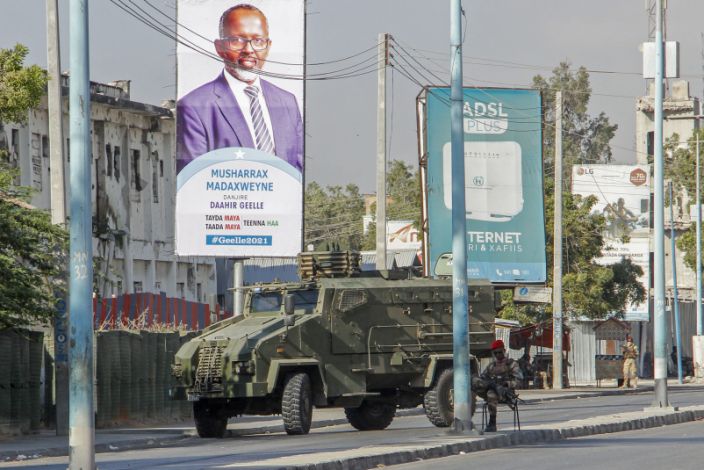 Security forces block a street with an armored personnel carrier during protests against the government and the delay of the country's election in the capital Mogadishu, Somalia Friday, Feb. 19, 2021. Security forces in Somalia's capital fired on hundreds of people protesting the delay of the country's election on Friday as at least one explosion was reported at the international airport and armored personnel carriers blocked major streets. (AP Photo)

Two days after violence related to Somalia’s delayed elections, the country’s foreign ministry has accused “external forces” for contributing to the problems.

At least five soldiers were killed and more than a dozen people, mostly civilians, were wounded on Friday in violent protests over the country’s delayed election.

Somali President Mohamed Abdullahi Mohamed is under pressure as elections were to be held on Feb. 8, but no vote occurred on that date because there was no agreement on how the polls should be conducted in the Horn of Africa nation. Some Somalis are demanding that the president should step down.

The foreign ministry blamed a foreign country for making “misinformed and misleading statements that disregard the facts and at times appear to be supporting insurrection,” in a statement issued Sunday.

Although no specific country was named, it was clear the statement was referring to the United Arab Emirates which had earlier criticized the violence.

“The United Arab Emirates has expressed its grave concern over the deteriorating situation in the Somali capital, Mogadishu, as a result of ongoing violence and the excessive use of force against civilians,” said the UAE statement issued Saturday.

Somalia’s Information Minister Osman Dubbe angrily responded to the UAE statement, saying it was provocative. He said the UAE should apologize.

In a press conference on Sunday, Dubbe alleged that some Somali officials had flown to the UAE after which they raised pre-conditions for Somalia’s elections which contributed to the delay in the polls.

The goal of direct, one-person-one-vote elections in Somalia remains elusive. It was meant to take place this month, but the federal government and states agreed on another “indirect election,” in which senators and members of parliament are elected by community leaders — delegates of powerful clans — in each member state. The members of parliament and senators then elect Somalia’s president.

An alliance of opposition leaders, along with civil society groups, have objected, arguing it leaves them no say in the politics of their own country. And the regional states of Jubbaland and Puntland refused to take part.