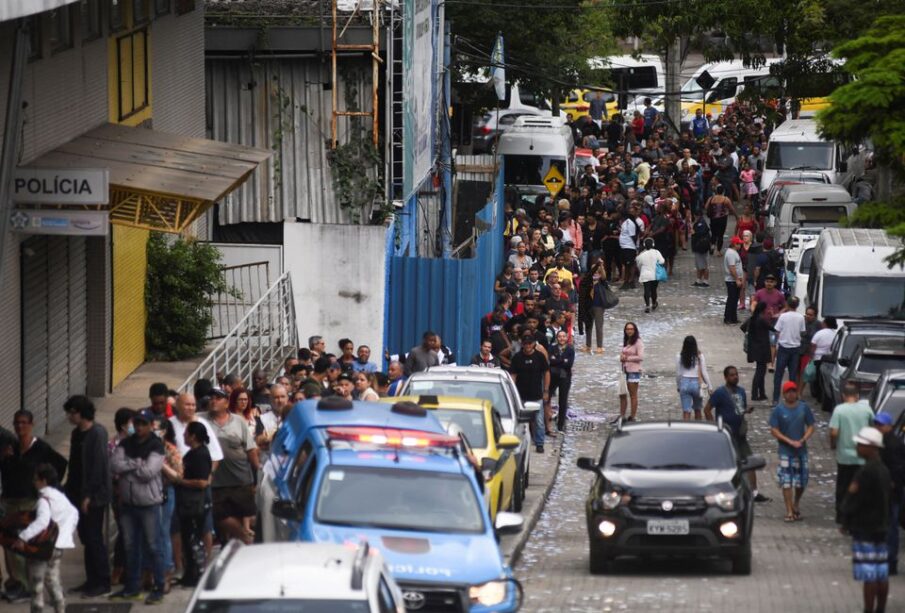 People stand in line to cast their votes outside a polling station, in Rio de Janeiro, Brazil October 2, 2022. REUTERS/Lucas Landau

Brazilians voted on Sunday in the first round of their country’s most polarized election in decades, with leftist Luiz Inacio Lula da Silva favored to beat right-wing incumbent Jair Bolsonaro.

There were reports of long, snaking lines across Brazil as many turned out to vote in a tense election, punctuated by episodes of violence and fears over a sharp uptick in gun ownership under Bolsonaro. Military police in Sao Paulo said a man entered a voting station in the Cidade Dutra neighborhood and fired at two police officers.

“The officers are conscious and receiving medical attention,” they wrote on Twitter.

Most opinion polls have shown Lula with a 10-15 percentage point lead, but Bolsonaro has signaled he may refuse to accept defeat, stoking fears of institutional crisis. If Lula wins over 50% of valid votes, which several pollsters show within reach, he would clinch an outright victory, foregoing a run-off.

Wearing a “Get Out Bozo” shirt, Rio de Janeiro resident Anna Luisa, 70, said she was voting for Lula for the first time.

“I have to take down Bolsonaro,” she said, citing his “homophobia” and his stance over Brazil’s 1964-85 military dictatorship, which Bolsonaro has long supported.

Beloved by his fans, Lula is also loathed by many Brazilians for his graft conviction. Bolsonaro often refers to him as “the inmate.” The leftist, who was president from 2003 to 2010, was jailed during the last election. But his conviction was later overturned by the Supreme Court, allowing him to face his rival Bolsonaro this year.

Voting in São Bernardo do Campo, Lula acknowledged the dramatic turnaround in his fortunes after a conviction that he says was politically motivated.

“It’s an important day for me,” he said. “Four years ago I couldn’t vote because I was the victim of a lie … I want to try to help my country to return to normal.”

Bolsonaro voted in Rio, and said he expected to win the election in Sunday’s first round, despite his poor showing in surveys. The former army captain does not trust the pollsters, saying their results do not correspond with the support at his campaign events.

“If we have clean elections, we will win today with at least 60% of the votes,” Bolsonaro said in a social media video. “All the evidence we have is favorable to us.”

A winner could be announced within hours after polling stations close at 5 p.m. Brasilia time (2000 GMT). If no candidate wins over half of the votes, excluding blank and spoiled ballots, the top two go to an Oct. 30 run-off.

Bolsonaro has threatened to contest the result of the vote, after making baseless allegations of fraud, accusing electoral authorities of plotting against him and suggesting the military should conduct a parallel tally, which they declined to do.

Brazilians are also voting on Sunday for all 513 members of the lower chamber of Congress, a third of the 81 members of the Senate and state governors and legislatures.

Though Lula leads the presidential race, Bolsonaro’s conservative coalition is expected to hold a majority in both chambers of Congress. That could present challenges for the leftist to govern a country with rising hunger, high unemployment and an uneven recovery from the COVID-19 pandemic.

Lula and Bolsonaro have both promised more generous welfare spending next year, adding to pressure on the federal budget.

The newly established autonomy of Brazil’s central bank and Lula’s choice of a centrist former rival as running mate have reassured some investors that he would not trigger a disruptive break in economic policy.

Lula has vowed to make a sharp departure from Bolsonaro’s environmental policies after deforestation in the Amazon rainforest hit a 15-year high. Lula has pledged to combat logging, step up protection of the biome and local tribes, and make Brazil a protagonist in climate diplomacy.

As in past elections, Brazil’s military has been mobilized to heighten security at some 477,000 polling stations, using electronic voting machines that allow for swift tabulation of results by the national electoral authority (TSE).

Following Bolsonaro’s criticisms of Brazil’s voting systems, the TSE invited a record number of foreign election observers, including first-time missions from U.S. observers at the Carter Center and the International Foundation for Electoral Systems (IFES).

Peace envoy steps in to try to ensure functioning government after Bosnians ...