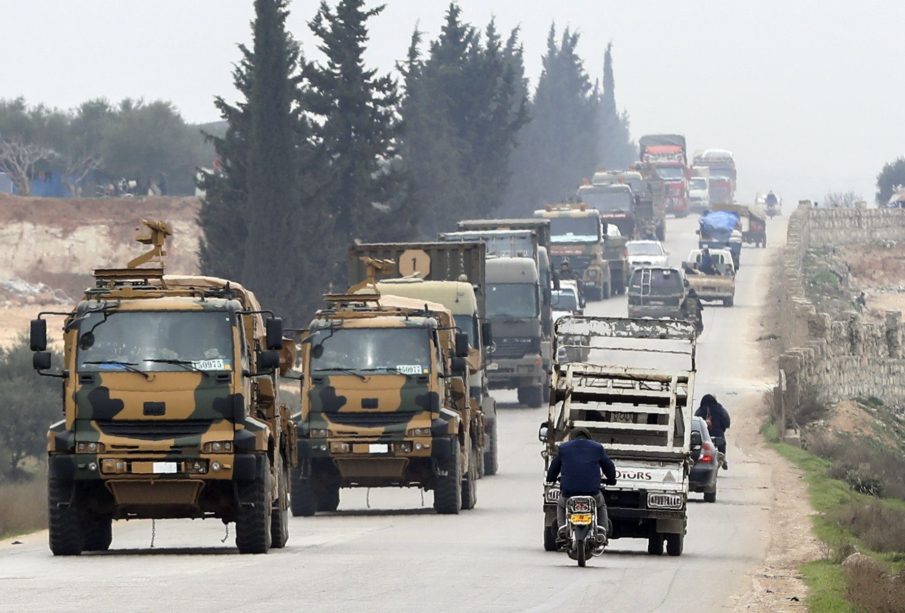 FILE - In this Friday, Feb. 28, 2020 file photo, a Turkish military convoy moves in the east of Idlib, Syria. Syria’s official news agency said Sunday, March 1, 2020, that two of its warplane were shot down by Turkish forces inside northwest Syria, amid a military escalation there that's led to growing direct clashes between Turkish and Syrian forces. SANA said the jets were targeted over the Idlib region, and that the four pilots ejected with parachutes and landed safely. (AP Photo, File)

The town’s recapture comes after escalating and direct clashes between Syrian and Turkish forces that could signal a new stage in the war.

Turkey backs fighters in Syria’s Idlib province, where the last remaining rebel forces in the country are holed up, and has sent thousands of troops into the area.

The fighting has also sparked one of the war’s worst humanitarian crisis, with almost one million Syrian civilians fleeing toward the sealed Turkish border.-

Outraged, Turkey’s President Recep Tayyip Erdogan announced his country’s European borders were open Saturday for thousands of migrants and refugees as he sought to pressure Europe to help Turkey handle the fallout from the war in Syria.

The new gains at Saraqeb on the ground also bring the last segment of a highway that links the capital Damascus and the major northern city of Aleppo under government control. The highway was reopened late last month before insurgents seized Saraqeb, which sits on the highway, last week.

On Sunday, Turkish troops shot down two Syrian warplanes after the Syrian military downed a Turkish drone, a major escalation in the direct conflict between Syrian and Turkish forces.

The Britain-based Syrian Observatory for Human Rights said troops captured the town under the cover of airstrikes by the Russian air force.

Syrian government forces have captured dozens of villages since they launched a Russian-backed offensive in Idlib in early December leaving hundreds of civilians dead and displacing more than 950,000 triggering a humanitarian crisis.

Amid the rising tensions bewteen Turkey and Russia’s ally Syria, Turkish broadcasters reported that Erdogan would meet Russian President Vladimir Putin in Moscow on March 5. The trip was later confirmed in a message to journalists.