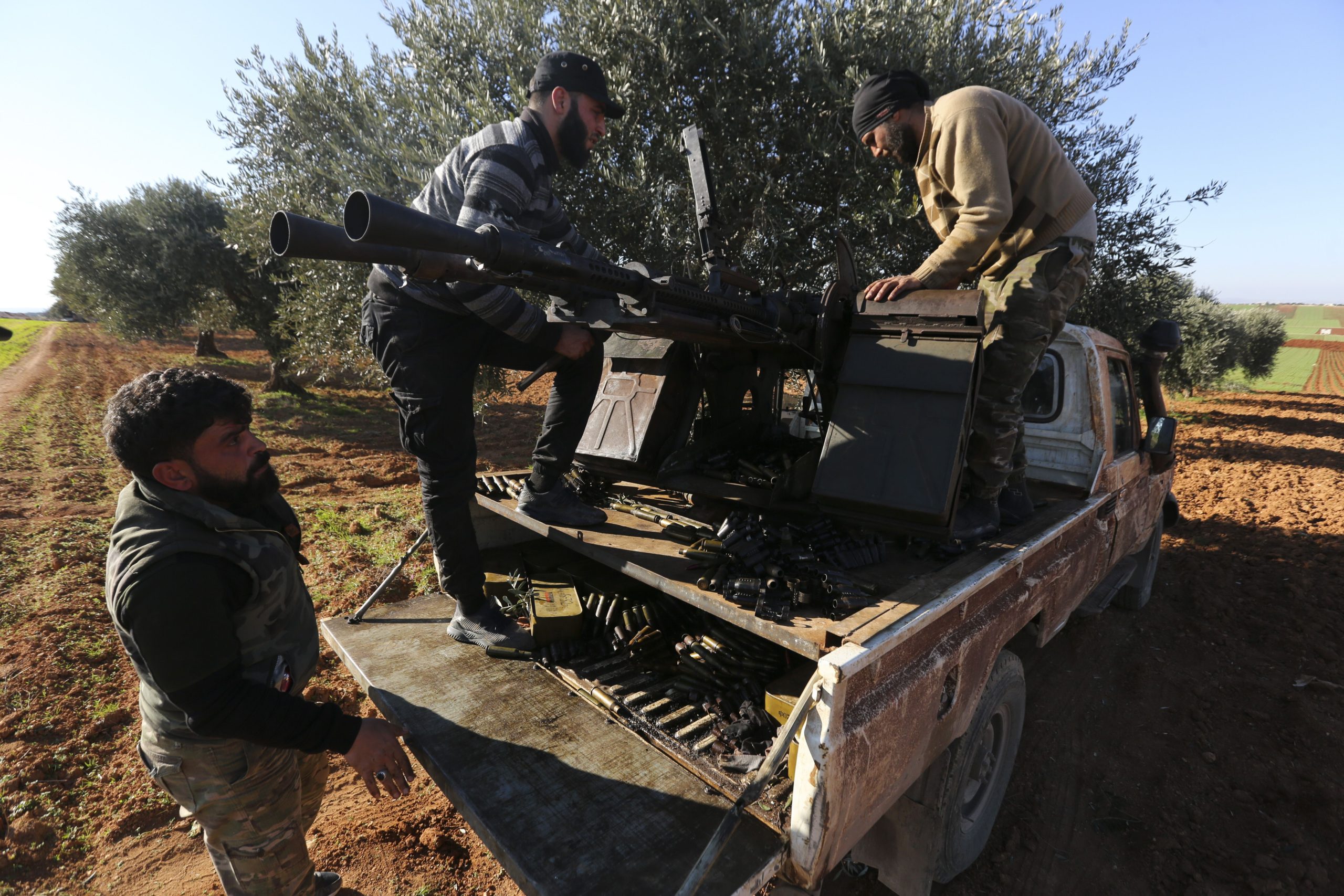 Turkish backed Syrian fighters load ammunition at a frontline near the town of Saraqib in Idlib province, Syria, Wednesday, Feb. 26, 2020. Syrian government forces have captured dozens of villages, including major rebel strongholds, over the past few days in the last opposition-held area in the country's northwest. (AP Photo/Ghaith Alsayed)

Turkey-backed Syrian opposition fighters on Thursday retook a strategic northwestern town in Syria that was recently captured by government forces, and cut the highway linking the capital, Damascus, with the northern city of Aleppo days after the government reopened it for the first time since 2012.

The retaking of Saraqeb which sits on the highway is a setback for Syrian President Bashar Assad’s forces who have scored major gains in a weeks long Russian-backed campaign in the last rebel stronghold in Idlib province. Officials had hailed the reopening of the motorway, known as the M5, as a major victory in the nine-year conflict.

The government’s military campaign to recapture Idlib, the last opposition-held stronghold in the country, has triggered a humanitarian catastrophe and the war’s largest single wave of displacement. According to the U.N. almost 950,000 civilians have been displaced since early Decembers, and more than 300 have been killed. Most have fled further north to safer areas near the Turkish border, overwhelming camps already crowded with refugees in cold winter weather.

From inside Saraqeb, activist Taher al-Omar said the town is now under opposition control. He posted a video with a fighter saying the government forces “ran away like rats.”

The Observatory said more than 60 fighters were killed on both sides since Wednesday, adding that later on Thursday, government forces launched a counteroffensive under the cover of Russian airstrikes to try retake the town.

Syrian state media reported intense clashes near Saraqeb, saying insurgents sent suicide car bombs and that Turkish forces bombarded the area. It said a small group of insurgents reached the highway to score a “propaganda stunt,” adding that “Syrian troops are dealing with them.”

Backed by Russian air power, Assad’s forces have over the past few days captured dozens of villages, including major rebel strongholds in the last opposition-held area.

The campaign also seized the last segments of the south-north M5 highway. When the government forces first took Saraqeb earlier this month, it marked their capture of the last major rebel-held town along the highway.

Over the past weeks, Turkey sent thousands of troops into Idlib province. Clashes between Syrian and Turkish troops have killed 18 Turkish soldiers.

Turkey’s Defense Ministry said on Thursday that two Turkish soldiers were killed in Syria in an air attack in Idlib province the previous day, and that two others were wounded.